Outside her home in Lusaka, Zambia, a mother proudly gazes down at her two newborns. The woman and her twins were cared for at the Kamwala District Health Center, one of two sites where Carolina faculty members conduct joint research with the University of Zambia School of Medicine.

“During her ultrasound, we discovered the young woman would be having twins, meaning she was at a higher risk,” shared Margaret Kasaro, research assistant professor with UNC Global Women’s Health— a group of clinicians, researchers and public health professionals working to improve the health of women in some of the world’s poorest countries.

The mother received free obstetrical ultrasounds as a participant of the Fetal Age Machine Learning Initiative, or FAMLI. The study, funded by the Bill and Melinda Gates Foundation, is designed to create a new “smart” ultrasound device that has the potential to save the lives of millions of women and newborns worldwide. 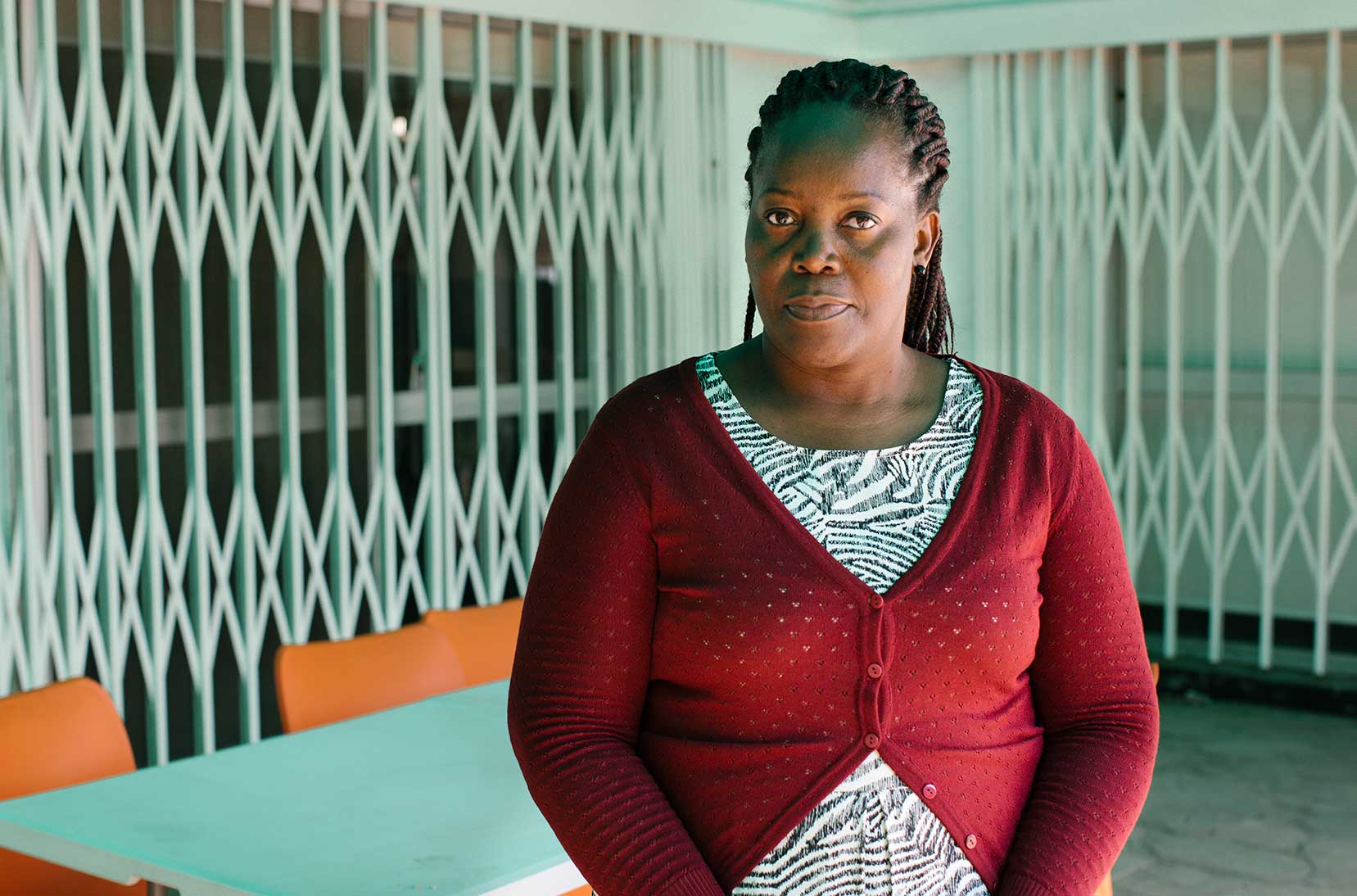 Simply being a part of the study potentially saved this woman’s life. In contrast to the U.S., where the average woman gets two to three ultrasound scans during her pregnancy, most Zambian women don’t have access to ultrasound at all, unless they live in an urban area. Even then, they might not receive a scan unless there is an obvious complication.

“Without the ultrasound, she would have found out she was having twins while giving birth, when it could have been more challenging to intervene,” Kasaro stressed. Although most Zambian women deliver in a health facility, it is common for them to arrive to a clinic already in advanced labor, increasing the risk of adverse events to mothers and infants.

“Ultrasound is a critical tool for pregnancy management,” said Dr. Jeffrey Stringer, professor and division director of GWH at UNC-Chapel Hill. “It’s as important as a stethoscope to the obstetrician.”

The scans the women in the FAMLI study receive aren’t just routine ultrasounds, either. They involve a complex set of blind sweeps, 3D images and an additional full biometry scan using a handheld ultrasound device.

“Thanks to this study, we are providing quality ultrasounds to women at no charge, meaning they have accurate gestational age dating, growth monitoring, breech presentation — or diagnosis of twins,” shared Dr. Joni Price, assistant professor in the UNC School of Medicine and member of GWH. “All information that we take for granted in the U.S. but use to make life-saving decisions every day.” 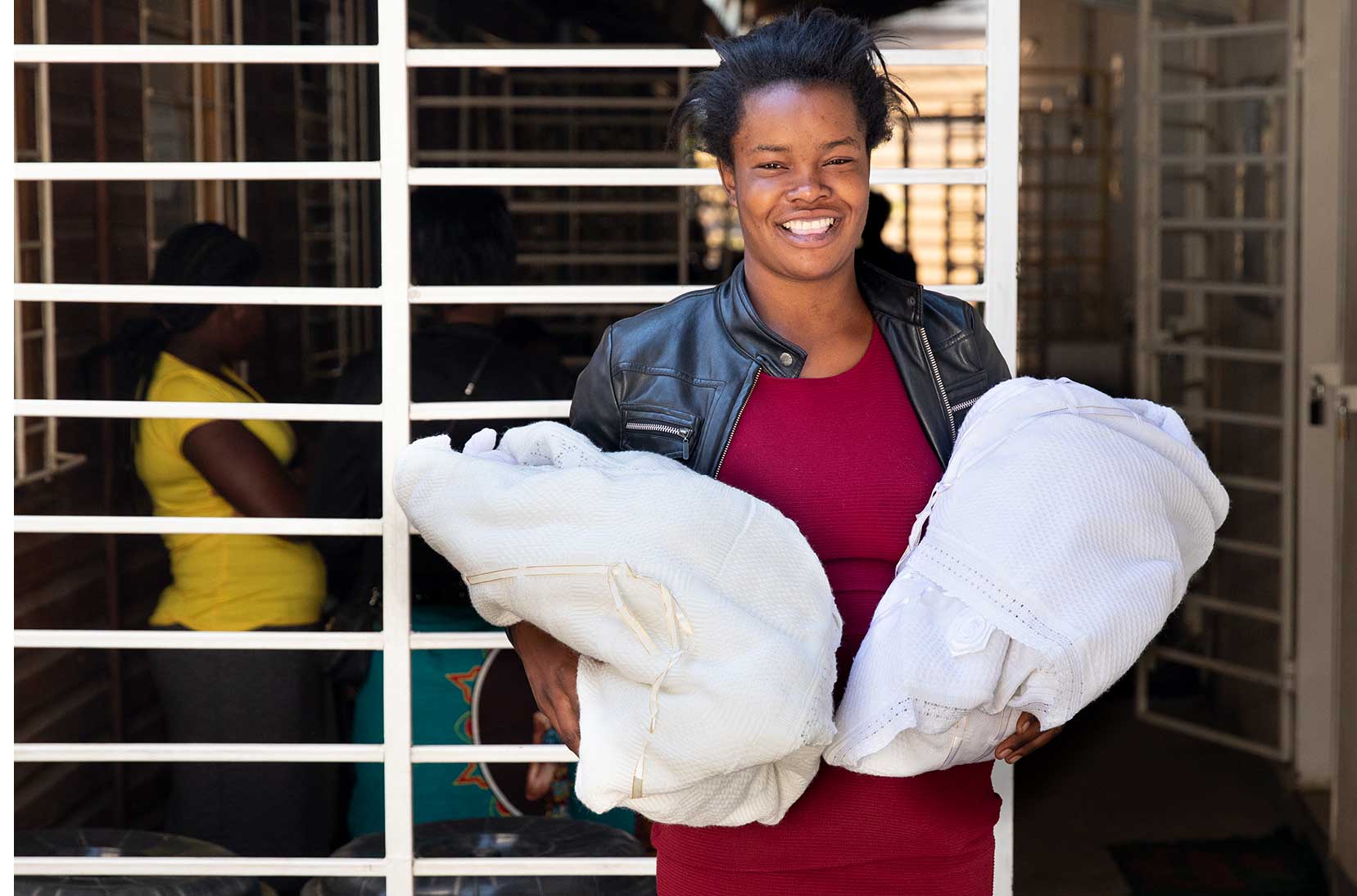 A young mother holds her newborn twins outside her home in Lusaka, Zambia. The mother discovered she was expecting twins because of an ultrasound she received as a participant in the FAMLI study. (Photo by Jeyhoun Allebaugh)

Price oversees the FAMLI study in Zambia, where she’s lived for nearly four years. She supervises more than a hundred Zambian research staff — from nurses, sonographers and data technicians to laboratory personnel, community educators and administrators. A number of American research fellows, medical students and master of public health students, including several from UNC-Chapel Hill, also rotate through the two clinics and contribute to projects.

The FAMLI study aims to build and train a computer program to evaluate ultrasound images and determine a diagnosis in real-time and then to pair that machine-learning algorithm with an inexpensive, portable ultrasound probe. Ultimately, these devices could then be deployed in areas without skilled sonographers in under-resourced settings both in the U.S. and abroad.

The most exciting part about FAMLI is that its central goal “is to improve access to essential obstetrical ultrasound diagnostics in a resource-poor setting like Zambia and not simply test interventions in Zambia that will only be applied in the U.S.,” added Price.

If FAMLI is successful, nurses, midwives and other providers will be able to enter basic patient information into an app, perform ultrasound studies with portable, hand-held probes, and receive diagnoses in real-time.

“The technology we’re developing could be used anywhere,” added Stringer, “in a low-resource country like Zambia or a family practice in rural North Carolina — anywhere you don’t have as many skilled operators or access to the big and bulky expensive ultrasound machines.”

Enam Aidam and Munguu Khuyag-Ochir, medical doctors in Ghana and Mongolia, respectively, are now master of public health students in the UNC Gillings School of Global Public Health. Last summer, they walked through the doors of UNC Hospitals in Chapel Hill, excited to be back in a clinical setting.

Albeit, this time in quite a different capacity: as summer interns with FAMLI.

Aidam and Khuyag-Ochir spent the majority of their internships in Chapel Hill annotating ultrasound images and videos — a painstaking but critical process — and building a training system for future annotators. The annotated data are provided to FAMLI’s computer programming partners and used to train the algorithm models. 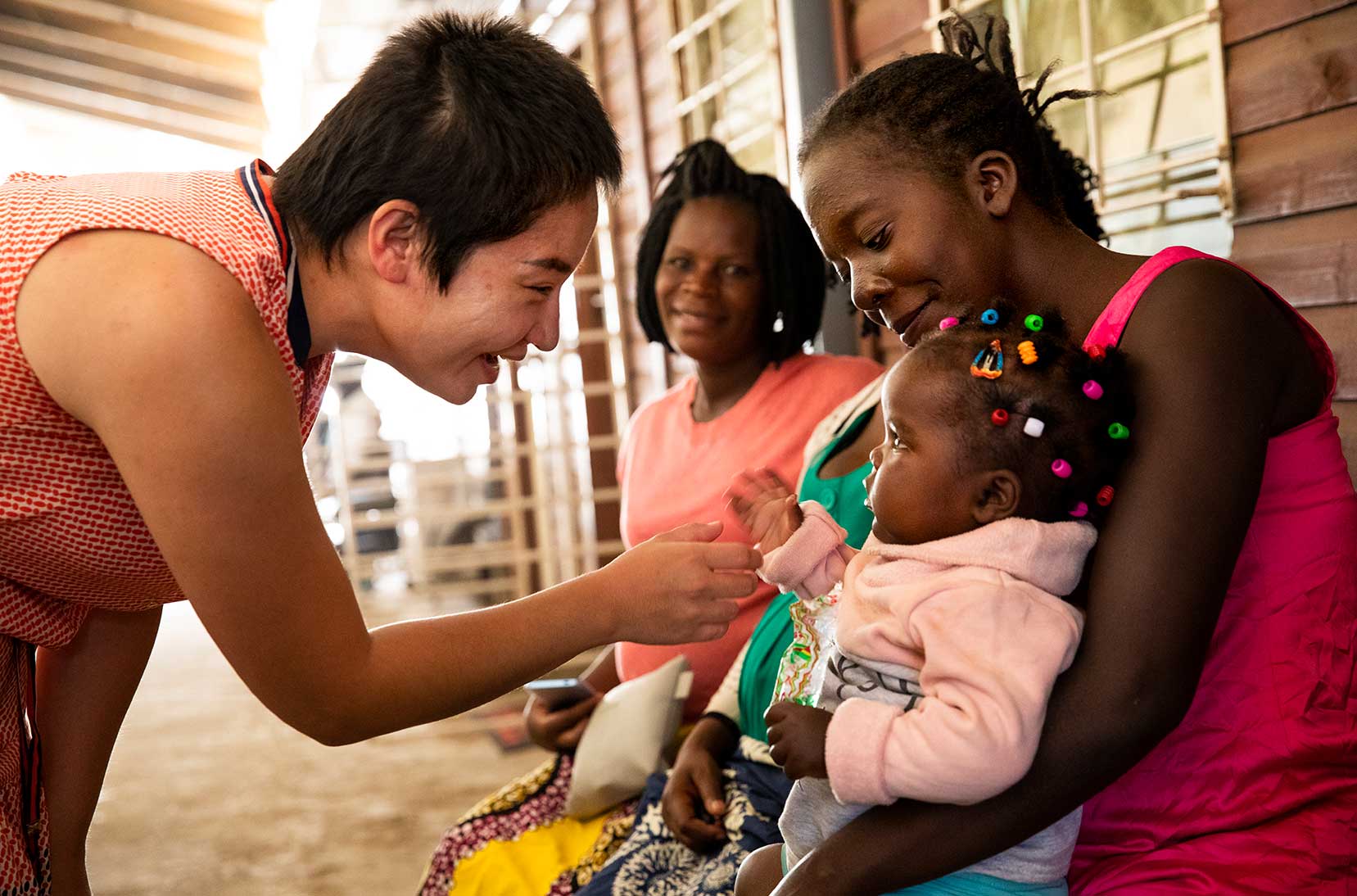 Global Women’s Health fellow Dr. Alan Rosenbaum specifically came to Carolina because of the opportunity to work on FAMLI. He served as a preceptor — a teaching clinician — for the FAMLI summer internship program. Rosenbaum divides his time as an obstetrician at UNC Hospitals and as a master of science in clinical research student at Gillings.

“Creating a program that can provide diagnoses in real-time requires a lot of work,” said Rosenbaum. “Because of its global health focus, Gillings often has highly skilled international physicians like Aidam and Khuyag-Ochir, who provided valuable time and energy to the project last summer.”

As part of the internship, Rosenbaum, Aidam and Khuyag-Ochir made a site visit to Lusaka, where they got to see FAMLI in action and how it’s benefitting lives.

“The most exciting part of the trip was interacting with mothers at various stages,” shared Aidam. “We had the chance to meet and talk with those waiting on their scans, those who were receiving their scans and could not hide their excitement when the sex of their babies was revealed, and even those who had benefitted from FAMLI scans and had their babies.”

Both students are interested in implementing and applying what they’re learning at Carolina to improve population health in their home countries.

Before coming to UNC-Chapel Hill, Aidam worked as a physician in a district hospital at a rural center in Accra, Ghana, where she saw a wide range of patients, from children to adults to geriatrics.

“I saw that most pregnant patients presented late with complications, and many people didn’t know when to go to the hospital,” said Aidam. “Often, it was too late to help them. “This work is important because when this new device is developed, it is going to improve access to ultrasound scans and help people in remote areas identify when they need to seek urgent care.”

Khuyag-Ochir has eight years of general pediatrics experience but feels like she can help more people through public health.

“As a doctor, I can only help my patients, but as a public health researcher, I can help more women and children,” she said. “FAMLI allows me to see, first-hand, how to implement a successful global maternal health program in a real-life, limited-resource setting. These advances are a possible solution for the issues in my country.” 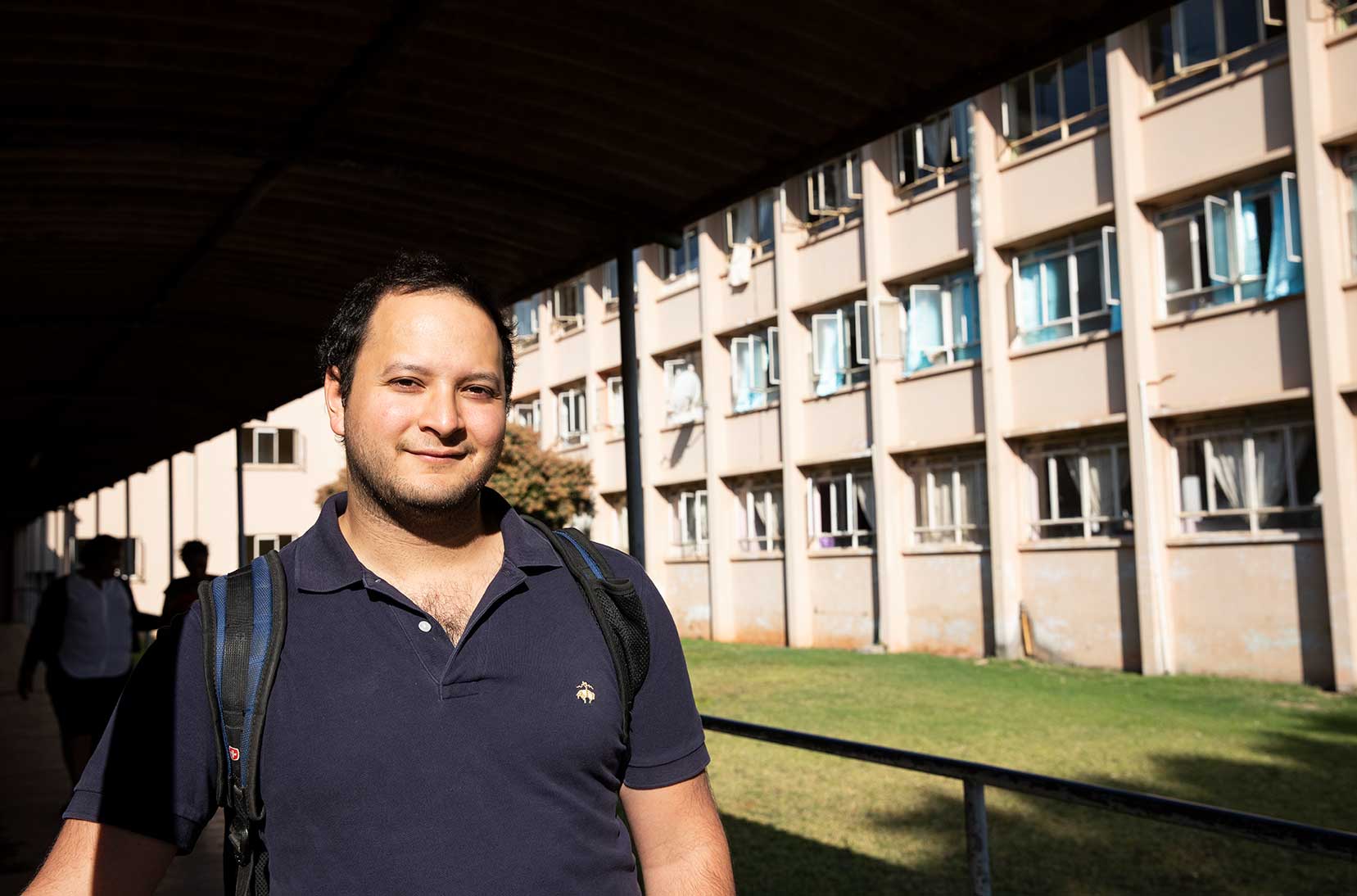 In summer 2019, Rosenbaum delivered his 830th baby at UNC Hospitals. This milestone was important to him because it’s the number of women in the world who die every day from pregnancy-related complications.

“When you think about the fact that there are seven billion people in the world, FAMLI has the potential to save lots of lives,” Rosenbaum said. “FAMLI is a high-reward project that we picked not because it’s easy, but because it has the ability to really change people’s lives.”

Kasaro, who received her medical degree at the University of Zambia and master of public health from the London School of Hygiene and Tropical Medicine, agrees. She joined UNC Global Women’s Health because of her passion for women’s health.

“When I look at a pregnant woman, I see someone who may have problems that need to be solved — wherever she is. I look at the factors around her that would encourage her to use health services or the factors that are impeding her. I want her to be healthier.”

As passionate as Kasaro is about the services the FAMLI study provides for her fellow Zambians, she always keeps the end goal in mind.

“What we are doing here is, yes, going to benefit me and Zambians, but what is most exciting to me is that we are going to be able to affect people globally. It is beyond boundaries now. I look at the global impact of what I am doing for my sister here in Zambia, my sister in India, my sister in the United States — my heart is for women.”

Stringer hopes that they’ll have devices ready to test in the field in fall 2020, and it’s all because of the collaboration at Carolina; the successful, longstanding partnership between UNC-Chapel Hill and the University of Zambia School of Medicine; and the support of the Bill and Melinda Gates Foundation.