Carolina alumna Mandy Eidson raises money to support affordable housing projects in her home state of Georgia. She says her 2014 English degree is critical to the work she does today.

“It strengthened my writing and critical thinking skills, which has enabled me to become a more effective communicator about social issues,” said Eidson, senior manager of the Atlanta Neighborhood Development Partnership Loan Fund. “Knowing how to effectively tailor your message for specific audiences is crucial and has ultimately made me more successful in garnering support for these projects.”

At Carolina, she took classes in everything from Shakespeare to American poetry to nature writing. She studied abroad at Oxford University through the Pauline Brooks and Christopher Armitage Scholarship. Her 2013 Summer Research Fellowship explored how writers Henry David Thoreau and William Wordsworth advocated for their native watersheds in response to environmental impacts from railroads and other development.

Eidson went on to pursue a master’s degree in urban studies through the European Union’s Erasmus Mundus program, studying at six European universities in Brussels, Vienna, Copenhagen and Madrid. 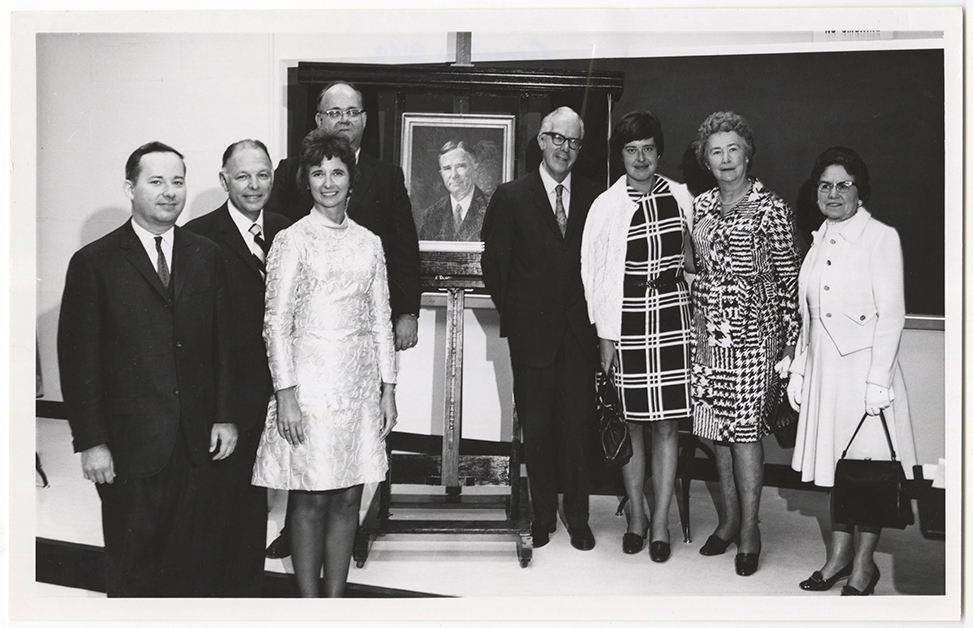 She recently spoke at a panel on “What Does it Mean to be an English and Comparative Literature Major Today?” Since September, the department of English and comparative literature has been celebrating “225 years of rhetoric, writing, film and literature” through a series of virtual events, which will conclude Oct. 27-29. (For more information, visit ecl225.unc.edu.) The department ties its history to the founding of the University in 1795, when rhetoric and composition were first taught, but birthday festivities were delayed a year due to the pandemic.

Hilary Lithgow, teaching associate professor of English and an undergraduate adviser to English majors, invited Eidson to speak. As she is fond of telling students and their parents: “There is nothing old-fashioned about being able to communicate clearly.”

It’s a skill that will help students be professionally successful “whether they are composing poems or policy briefs or legal arguments or medical reports or grant proposals or elevator pitches for a new startup or any other kind of communication they may need to craft,” Lithgow said.

Even though rhetoric and composition were taught in the University’s earliest days, it wasn’t until 1849 that the first professor of English literature and history was appointed. In 1875 (when the University reopened after being closed for Reconstruction), a College of Literature was formed; in 1901, the department of English was formally established. In 1901, the undergraduate catalog advertised 14 courses in English; today there are over 300. 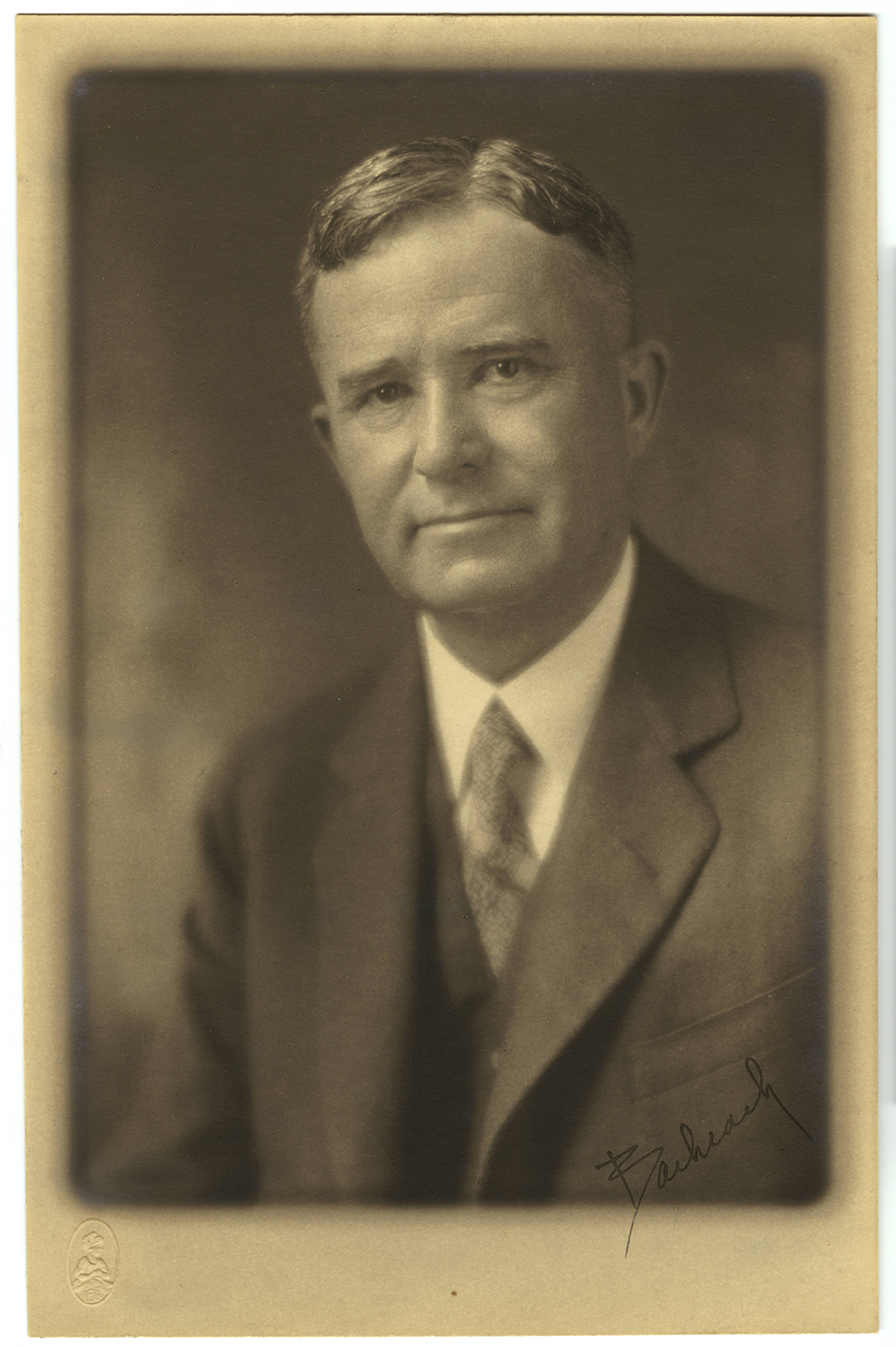 “Literature was taught in Latin and Greek in the very beginning, but students also had to turn in a composition to the presiding professor every two weeks,” said Erika Lindemann, professor of English emerita. She got her UNC master’s and doctorate degrees in English in 1969 and 1972, respectively, and became director of composition in 1980. She went on to write a seminal book, A Rhetoric for Writing Teachers, in 1982.

Just as students today often dread turning in that final English paper, students in the 1840s shared a similar writing phobia, as recounted in a journal entry of one student, James L. Dusenbery of Lexington, North Carolina. Lindemann has worked on several digital humanities projects about the University’s history, including a project on Dusenbery’s senior year at Carolina.

“I have done nothing as yet towards writing a (senior) speech … To write a speech for the first time & one too that is to be spoken before an intellectual & severely critical assembly, is, to me, a task of fearful magnitude & startling responsibility.”

Lindemann, who confesses that she “loves digging around in the archives,” worked with English Ph.D. students Hannah Montgomery and Grant Glass and teaching associate professor Courtney Rivard to develop a comprehensive timeline of the department’s history.

Lindemann and Montgomery were struck by how many ideas — some that became full-fledged departments and entities of their own — were incubated in the English department. Dramatic art, women’s and gender studies, African and African American studies, journalism and even the Bulls Head Bookshop were all tied to interests of the department’s professors and students.

“That freedom to explore whatever corollary interest you have is still very present today,” Montgomery said. She has worked with the department’s Digital Literacy and Communications Lab for several years and is involved with the Comparative Literature and English Association of Graduate Students. “One example of that would be the new Greenlaw Gameroom for faculty who want to incorporate gaming pedagogy into their teaching and research.”

Daniel Anderson, professor and director of the Writing Program, calls Lindemann “a foundational figure in writing instruction.” He said Lindemann and others have helped to develop English 105, a required first-year writing course that introduces students to academic writing across the disciplines, into what it is today. Each course has some sort of digital component. English 105i, a more specialized course, allows for specific training within a discipline: business, natural sciences, health, social sciences, humanities, law or digital humanities. 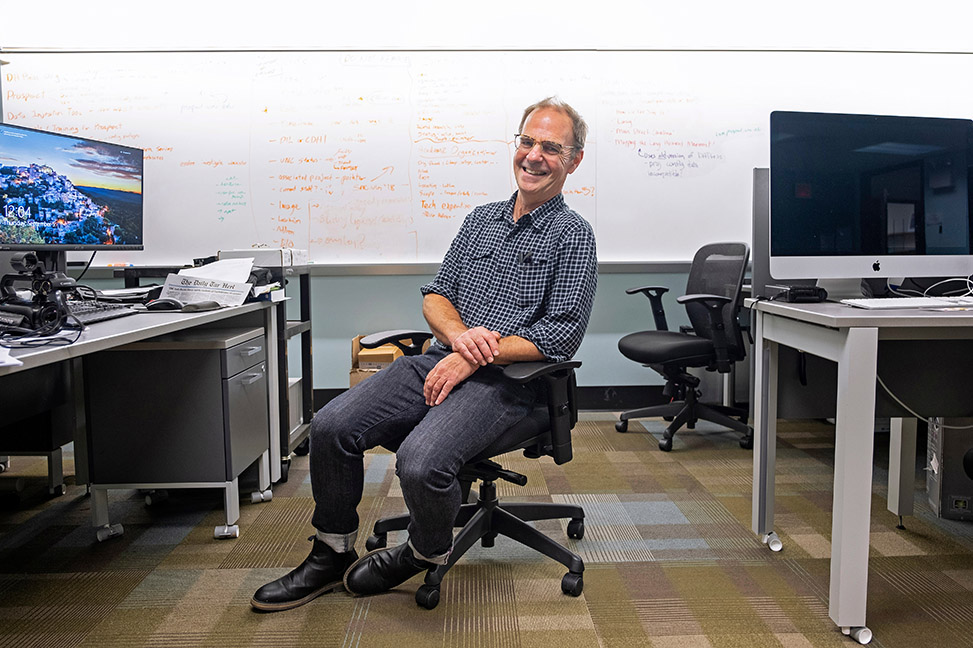 Daniel Anderson, director of the Writing Program, is a leading voice in digital scholarship. (photo by Jon Gardiner)

“Our department has been built on this idea of intelligent evolution,” he said. “When deep roots are planted, the graduate students and instructors provide the nutrition to make it grow. It’s a bottom-up energy that’s really powerful.”

The department also has a unique role of touching the life of every Carolina student, regardless of their major.

“Every student takes English 105, and it’s this wonderful on-ramp to the University because the research and writing is different from what they’ve done in high school,” added Anderson, who is a leading voice in digital scholarship.

María DeGuzmán, Eugene H. Falk Distinguished Professor, said that spirit of innovation and incubation made English the perfect home in 2004 for the Latina/o Studies Program, the first of its kind in the Southeast.

“Since 1999, we’ve brought some of the biggest names in Latina/o studies — more than 100 scholars, creative writers, visual artists, performers, authors, cultural activists and social change-makers — to campus,” said DeGuzman, who directs the program. A minor, approved in 2004, grew out of those early days of the Latina/o Cultures Speaker Series.

“Through the minor, we are interested in biology, the medical humanities, food insecurity, climate change and more,” DeGuzmán said. “Our program melds the humanities, social sciences and natural sciences, and critical thinking and good writing are essential to addressing any of these issues.”

New concentrations and doubling up

Beverly Taylor, who served as the department’s first female chair (from 2008 to 2016) and came to UNC fresh out of graduate school in 1977, said the department is anything but “stodgy.”

“It’s not your grandma’s English major. … We incorporate new writers and issues into our curriculum all the time. I find that very compelling and powerful.” 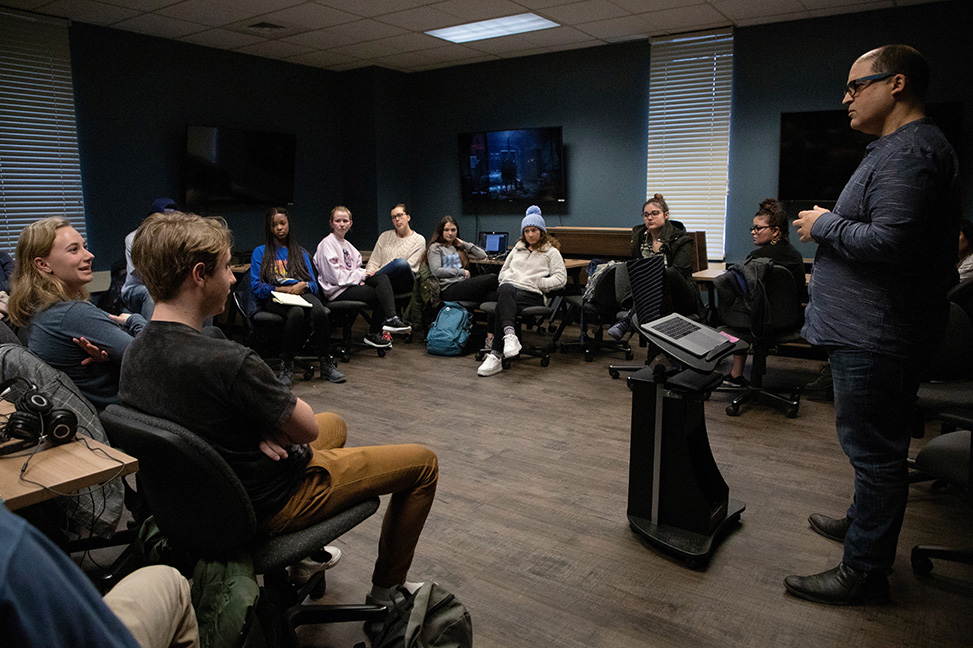 Not that Shakespeare and Chaucer and Milton and other great writers are ignored. The current department chair, Mary Floyd-Wilson, is in fact a Shakespeare scholar, and Taylor studies Elizabeth Barrett Browning.

In fall 2018, English introduced seven major concentrations. Students can still take a broad-based major, but they may opt to explore more deeply through these “tracks”: British and American literature; comparative and world literatures; creative writing; film studies; science, medicine and literature; social justice and literature; and writing, editing and digital publishing. Many of the major concentrations, including creative writing, which has had a long history in the department, may also be pursued as minors. Due to the department’s growing emphasis on medical humanities, students can now pursue an M.A. in literature, medicine and culture.

And many undergraduate students, according to Floyd-Wilson, choose to “double up” and pick English as a second major.

“We feel good about advising students to double up because we’re bolstering their employment capacity. Businesses and other employers love English majors because they can be plopped down into a complicated situation and they understand how to synthesize the material and be clear communicators,” said Floyd-Wilson, Mann Family Distinguished Professor. (Last year the department hosted a web panel called “How to Succeed in Business with an English Major.”)

“I have a former student who’s now a business attorney who wrote to me many years ago after he was in my class and he said that reading 19th-century novels had saved his sanity,” Taylor said.

A lifelong love of writing

Creative writing traces its history to the hiring of Jesse Rehder in 1947, the first woman to be granted tenure and the rank of associate professor in the department. 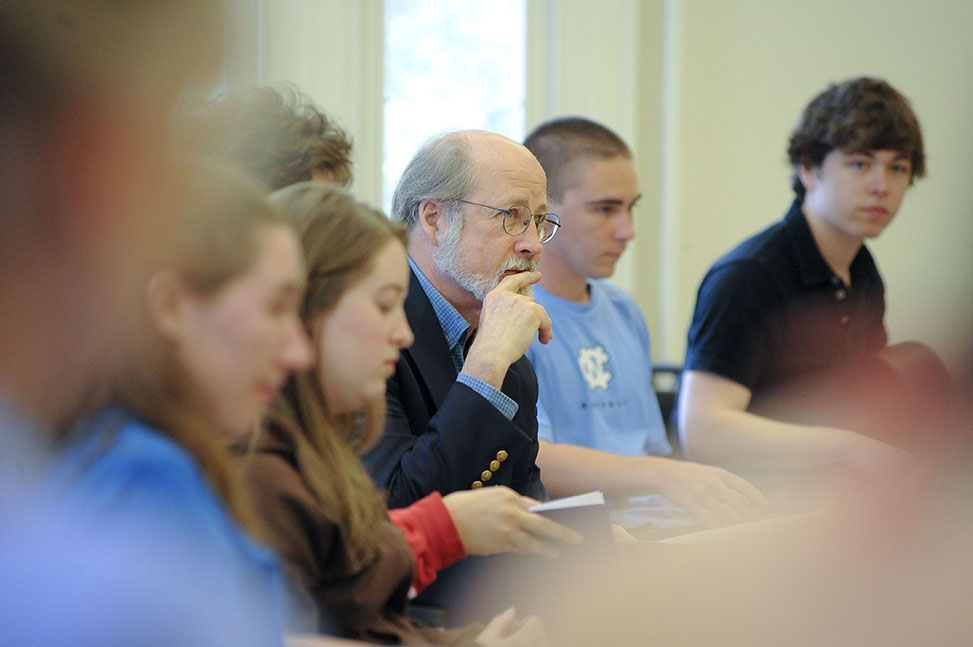 Since that time, the department has continued to hire creative writing faculty who have won major state and national awards. Bland Simpson, who graduated from Carolina in 1973, came back to teach creative writing in 1982. He has had various administrative roles over the years, including interim chair of the department and head of the creative writing program. He attributes the secret to the program’s growth and sustainability to “encouragement and a culture of collaboration.” That “collaborative sensibility” continues today.

Because Carolina doesn’t have an MFA program in creative writing, faculty are able to devote all of their energy to the undergraduate program, which is among the best in the country, Simpson said.

“It is a vibrant program. We have so many great teachers, and it’s about taking our students’ work seriously,” said Simpson, Kenan Distinguished Professor. “It is the thing they want the most.”

Simpson, an author, songwriter and longtime member of the Red Clay Ramblers, has worked for years to create an interdisciplinary path in musical writing. Students can now explore those courses in both the creative writing major and minor.

Joanna Pearson remembers fondly her days in the creative writing program. The Shelby, North Carolina, native graduated with highest honors in English and creative writing in 2002, then went on to pursue both an MFA in poetry and a medical doctor from Johns Hopkins University.

Today she’s both an accomplished author and a practicing psychiatrist in Chapel Hill. She is the 2021 winner of the Drue Heinz Literature Prize, one of the nation’s most prestigious awards. Her collection of short stories, Now You Know It All, will be published by the University of Pittsburgh Press in October.

Pearson is in a writing group today with one of the creative writing students she first met in a senior Honors poetry seminar with Doris Betts Term Professor Michael McFee.

“It’s such an act of generosity for these professors to take undergraduate students seriously and to engage with them as writers and thinkers,” she said. “Within a large university, you have to find that small place that feels like yours. The English department’s creative writing program was my small place.”

Learn about more of the department’s milestones