In 2005, Carolina physicist Jianping Lu noticed that his 5-year-old son was having trouble breathing. He took him to a local doctor, who ordered a CT scan to see what might be happening inside the boy’s lungs. The resulting picture wasn’t clear enough for the doctor to give them a diagnosis, and because they’d discussed a potential — and risky — surgery to fix the problem, Lu got a second opinion.

“The second CT scan was slightly better,” he remembers. “The doctor said maybe we should wait a couple years, and he may grow out of it.”

Luckily, that’s exactly what happened, and his son’s condition improved. But the experience showed Lu why the research he was doing at the time with UNC-Chapel Hill materials scientist Otto Zhou was so important.

Since the early 2000s, Lu and Zhou have been collaborating to improve X-ray technology in the medical field. At the time, both were working with carbon nanotubes — tiny tubes made of a single layer of carbon atoms. Lu was theorizing how they might transmit electrons in a simpler, less resistive way, and Zhou was testing the application of that theory in his lab. Their experiments lined up.

Since then, Lu and Zhou have worked on numerous projects across campus to create better X-ray sources and imaging systems in the dental and medical fields.

“Everything we work on requires a close team of people from different disciplines bringing their expertise together,” Zhou says. “We have engineers, physicists, radiologists, physicians. That really helps us move forward.”

Endeavors featured this research and placed Zhou on the cover of the Fall 2005 issue. The article discussed their early projects, the creation of a spinoff company called Xintek and the prototypes they were able to produce. But it takes a long time for technology like this to come to the commercial market.

“There’s a lot of engineering fine-tuning that needs to happen,” Zhou says. “It’s a challenging, large effort that requires a lot of persistence.”

Sixteen years later, one of Zhou and Lu’s projects will finally be available to doctors: a 3D dental X-ray device, which will provide a big upgrade to current 2D technology. And that’s just one of many projects coming down the pike.

An X-ray at the dentist’s office used to involve going into a separate room where a dental hygienist would place a heavy lead vest over your shoulders and aim the tube of a giant machine at one side of your mouth. They’d leave the room, press a button and take the X-ray. They’d do this a few times, coming back in to move the tube each time, eventually getting a full picture of the mouth. The whole process would take about 10 minutes.

Now when you visit the dentist, you stay in the same room your cleaning is conducted in. The dental hygienist places a small device in your mouth and asks you to bite down. Within a few seconds, she’s captured 2-dimensional images of all your teeth.

This is done using a conventional X-ray source, which produces electrons and uses high voltage to accelerate them, forcing them against a Tungsten target that generates enough radiation to produce an image. More than 99% of the energy used to produce the X-ray turns into heat, which means less than 1% makes the image. It takes a long time to cool down and wastes a lot of energy.

“It’s similar to a space heater,” Zhou says. “You apply a current to a piece of metal, and it becomes really hot — about 1000oC.”

That amount of heat eventually causes the metal filaments within the machine to burn out — and they cost about $6,000 to replace.

“It’s sort of like an LED light that can be flipped on and off continuously,” Zhou says.

In collaboration with Carolina physicist Christina Inscoe and UNC Adams School of Dentistry researchers Angela Broome, André Mol and Enrique Platin, Zhou and Lu have continued to help advance X-ray technology — an effort that has led to the creation of a company called Surround Medical Systems, located in Research Triangle Park. The team is hopeful the U.S. Food and Drug Administration will soon approve its 3D X-ray device called PORTRAY so that it will hit the commercial market by the end of 2021, allowing dentists to capture more detailed imaging for identifying cavities and other dental diseases.

“This will be a game-changer,” says Platin, now retired from UNC-Chapel Hill. “This is a transformative technology that will have a profound effect on diagnosing dental disease. The current technology is 2D, and everything is superimposed. So you can’t easily see objects that are on top of each other.”

Within the next month, PORTRAY will be deployed to three different institutions, which will engage in the same preliminary studies the research team did on earlier iterations of the device to show that the technology works. 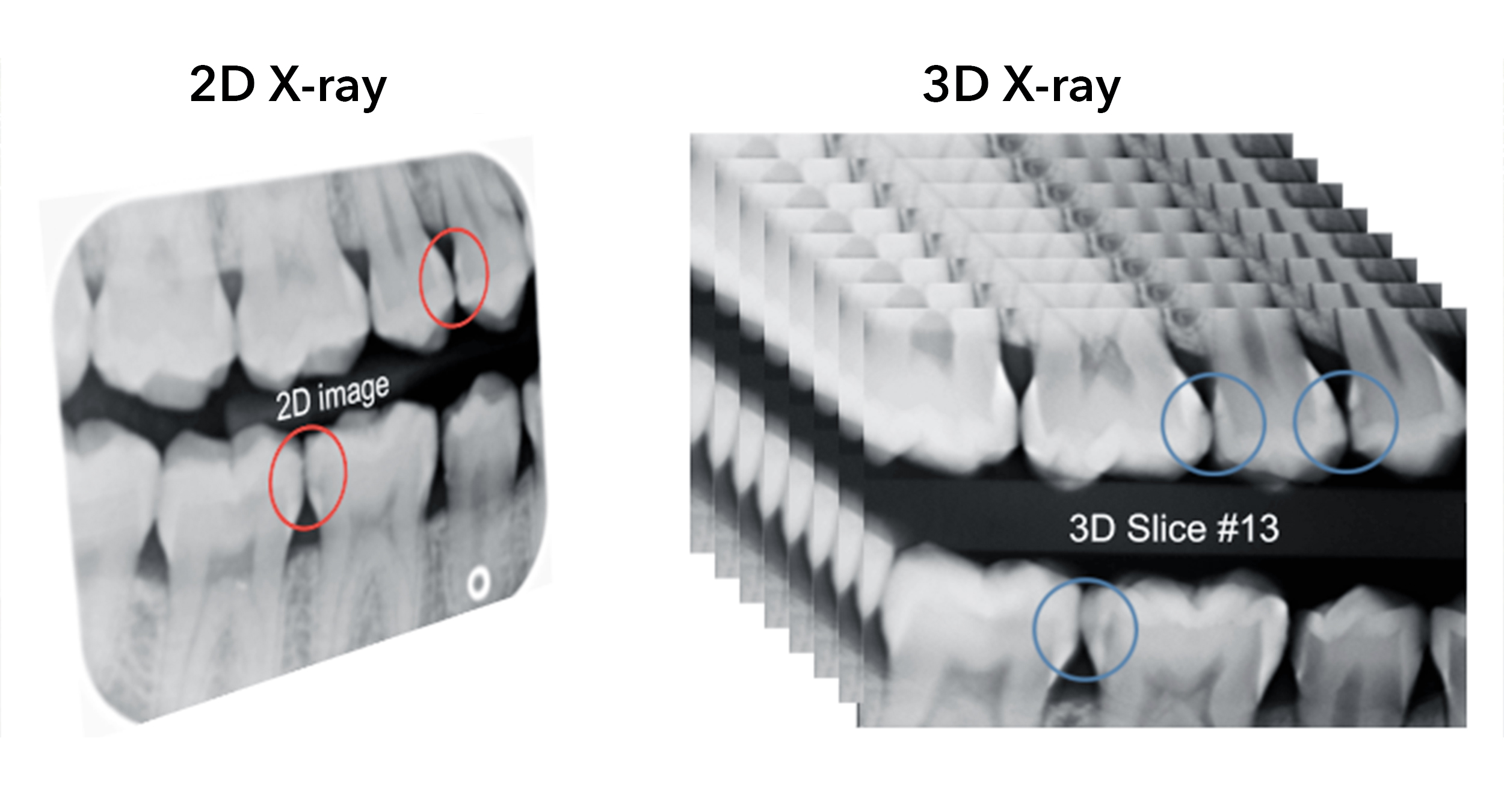 A 3D X-ray stacks multiple images on top of one another, creating a sharper, more detailed image. (Photos courtesy of Enrique Platin)

PORTRAY is just one of many devices that Zhou and his lab have helped develop in the last two decades. In collaboration with Carolina radiologists Yueh Lee and Cherie Kuzmiak, they are also working on a 3D mammography machine that reduces the amount of radiation a patient receives during imaging. This is especially important for women who regularly receive radiation to treat breast cancer. It is currently being used for patient imaging at the UNC Cancer Hospital.

Zhou is also engaged in an ongoing project with Carolina radiation oncologist Sha Chang focused on delivering controlled radiation to cancerous tumors using what’s called microbeam radiation therapy. The only way to do this currently is by using a device called a synchotron — which is the size of Kenan Stadium, according to Zhou. Preclinical studies show it’s effective but not practical.

Another project, led by Lee, is a CT machine to improve brain imaging. This could have large implications for treating brain injuries or cancers like glioblastoma, which only has a 40% survival rate in the first year after diagnosis.

“The idea is to make a CT scanner that’s faster and can be used in remote locations so that you don’t need the controlled environment of a hospital,” Zhou says.

The medical industry isn’t the only one that benefits from this technology. X-rays are also heavily used for industrial inspections and airport security. Most recently, a CT scanner powered by the carbon nanotube X-ray source has received certifications from several international regulatory agencies for luggage inspection. It is faster and more efficient to prevent lags in security lines at airports.

When asked if he has a favorite project he’s worked on, Zhou can’t pick just one.

“That’s like having a lot of kids and saying, ‘This one is my favorite,’” he says, with a laugh.  “I like all of them — whether it’s a pipeline application or research paper — because it is enjoyable to start from an idea that leads to an actual device that produces clinical results and eventually becomes useful.”

While he finds much joy in this work, he stresses that it takes a lot of time — and patience — for projects to go from the lab to a consumer. Partly because it takes a lot of people to make something like this happen.

“A machine requires software, hardware and electronics. It requires people who are good at computations and clinical input. So putting together a team that stays together and works on this for a long time enough to make it useful — that’s difficult.”

But if anyone can do it, it’s Zhou, who Platin believes will achieve major scientific awards for this work.

“Otto is the smartest, nicest, most down-to-Earth person I have ever met in my life,” Platin says. “He allows people to express their scientific knowledge and is great at finding people to work together — and is at a level most of us want to reach when we grow up.

“This technology is good for North Carolina. It’s good for the university,” Platin continues. “It shows that we have great opportunities in this country for people to work together and create new things. That’s huge.”