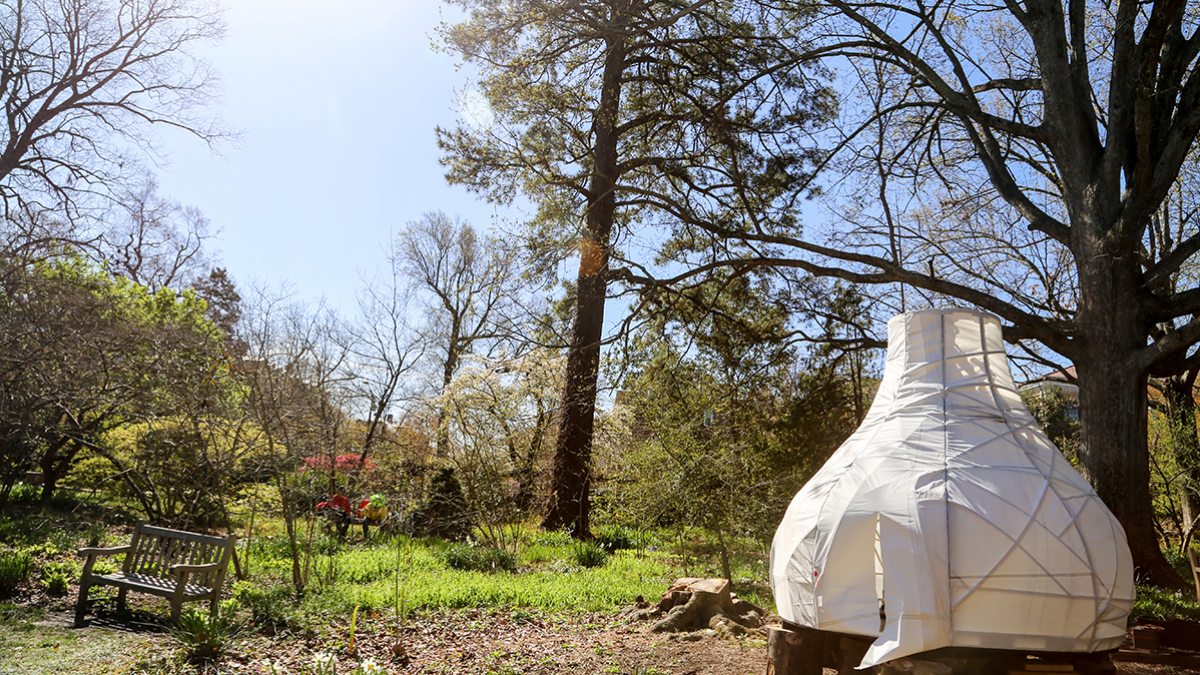 Art isn’t always created with a paintbrush, canvas or clay.

Sometimes it requires something a little more powerful. Like a chop saw.

“Going out and buying a rake or a shovel and doing the landscape is to me the same thing as somebody going and buying a paintbrush,” said Nick Chatfield-Taylor, an artist-in-residence at the local Level Retreat art retreat. “A chop saw or a screw gun, these are both tools that can build a structure but also are artistic utensils.”

Chatfield-Taylor, a multidisciplinary artist and woodworker who creates large-scale structures inspired by Dr. Seuss, is showcasing his work at the University of North Carolina at Chapel Hill this week for the annual Arts Everywhere Day. The installation was brought to Carolina with support from the Orange County Arts Commission.

His life-size Seussian igloo will be on exhibition in the Coker Arboretum through April 8 as one of many installations, performances and artistic displays spread throughout Carolina’s campus during the celebration, which will be held on April 6.

Arts Everywhere is a signature initiative launched by Chancellor Carol L. Folt in 2016 that aims to make the arts a fundamental part of Carolina culture and daily campus life. It invests in sustained creative practice, live arts experiences and arts learning, with the goal of making Carolina a leader in transforming the liberal arts education.

“The second Arts Everywhere Day reflects the growing partnerships that are critical to all that we do throughout the year,” said Emil Kang, special assistant to the chancellor for the arts. “The day is a way for us to celebrate the power of the arts to bring people together across disciplines, interests and backgrounds.”

Chatfield-Taylor is looking to tap into that mindset and bring the campus community together at Coker Arboretum through art.

For much of his life, Chatfield-Taylor’s artistic medium was video, creating films, visual displays and music videos. But five years ago, he was looking for a change from a digital format to three-dimensional art.

“I made a very conscious decision that I didn’t want to spend the rest of my life working alone in a dark room all day [editing video] and that I wanted to make stuff that has a physical presence and I just started building things,” he said.

Chatfield-Taylor began building structures using wood pallets and has since continued experimenting with the possibilities and limitations of his medium.

Inspired by Dr. Seuss drawings, Chatfield-Taylor’s designs “take squares and turn them into circles,” creating structures with no corners. He views his art as an “artistic, scientific architecture experiment,” simply asking himself the question of “what if I do this?”

“As opposed to reading in a book how to frame a deck, I’m kind of teaching myself traditional woodworking,” he said. “I just start to do it and make mistakes, but from those mistakes learn something that I would have never learned if a book or a teacher told me to do it that way.”

Chatfield-Taylor’s installation at Coker Arboretum is a product of his vision-first, logistics-second approach. The initial goal of the Seussian igloo, he said, was to create a sizeable structure that could be broken down into smaller pieces, carried and then re-assembled anywhere.

Through three weeks of experimenting and construction in his Oakland, California woodshop, Chatfield-Taylor brought his vision to life in the form of an 8-foot tall teardrop sculpture wrapped in reclaimed sails. He then took it apart and packed the structure into his mini-van for a cross-country trek to Chapel Hill.

Located in the middle of Coker Arboretum, the 8-foot-wide structure sits elevated atop large logs. The sculpture isn’t just a visual focal point of the arboretum for the week but is something that Chatfield-Taylor wants the community to explore by stepping into and experiencing the art.

Ultimately, Chatfield-Taylor said, the goal of his art is to bring people together in the arboretum as a community and share the natural beauty of the garden.

“Come here and have a picnic,” he said. “I just want people to come and hang out.”