First-year student Jackson Holmes took a chance to study abroad early in his time at Carolina, and now he can’t wait to make new memories in Chapel Hill with the Tar Heel friends he made in Scotland.

Holmes, an economics major from Texas, learned about Carolina Global Launch when he applied to UNC-Chapel Hill in 2021. During the pandemic and global lockdowns, Holmes had little opportunity to travel, and he didn’t want to waste a chance to venture out when the opportunity came along. When he received his acceptance email from UNC-Chapel Hill and information about Carolina Global Launch, he jumped at the chance to go abroad.

The Carolina Global Launch program enables first-year students to spend their fall semester – at either the University of Granada in Spain, the University of Limerick in Ireland, or at Stirling University in Scotland before coming to Chapel Hill the following spring semester. The students earn credit for the courses they take and go on cultural excursions together. 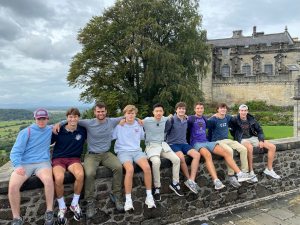 Holmes chose the University of Stirling.

“Thankfully there’s no language barrier, and the university had plenty of programming to help us meet people,” Holmes says. “I joined their ‘American football’ team and made a group of friends quickly, many of whom are now back in Chapel Hill with me.”

Holmes said some of his highlights from the past semester were getting started on his general education credits and exploring the countryside with other students. 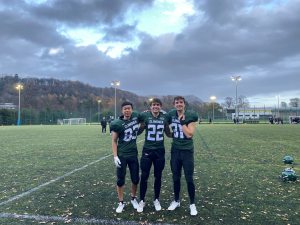 “I was enrolled in three classes during my time there, which helped cross a couple of classes off my list at Carolina and left time to enjoy myself there too,” Holmes says. “We also took trips to Stirling Castle and the Isle of Skye as a group, so I feel like I got to explore the country.”

After returning to the States and moving into his dorm in Chapel Hill, Holmes is happy to meet more classmates and think about where he’d like to study abroad next.

“This was my second trip abroad, and I’d like to do it again later during college and explore a whole new country and university,” Holmes says.