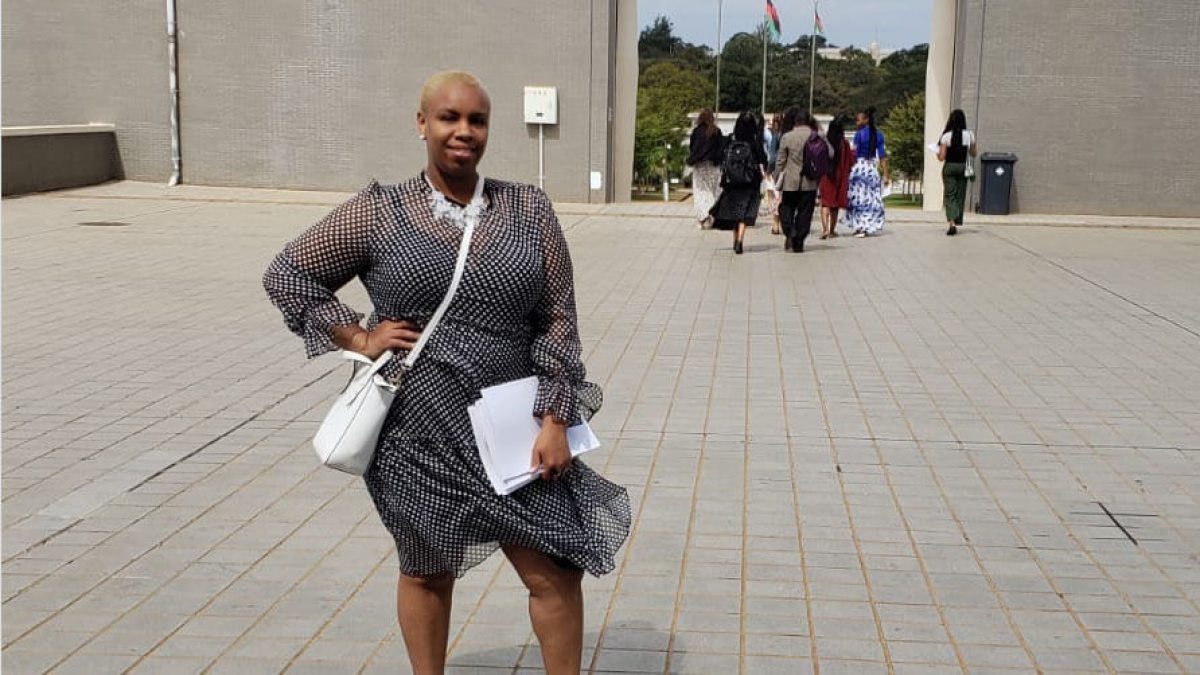 College wasn’t immediately in the cards for Randi Thompson when she finished high school.

She had a young son and needed to provide for him. She took a job at a department of social services in Southern Maryland, and after seven years, she decided to make a big change.

“One day I just came to the realization that I was in a dead-end situation. I knew I wanted to make a difference in people’s lives,” said Thompson, a native of District Heights, Maryland. “Coming to college was an opportunity for me to become one step closer to making the world a better place. I also wanted to set an example for my community.”

On May 12, Thompson will graduate from Carolina with a bachelor’s degree in public policy and a minor in social and economic justice. In doing so, she will become the first person in her family to graduate from college.

Time for a change

After working outside of Washington for so many years, Thompson was looking for a change in scenery and decided to move to North Carolina. She didn’t have a job and hadn’t been admitted to college, but she knew North Carolina was the right place for her. She had fond memories of driving through the state to visit her father, who lived in Georgia.

“There was something about North Carolina,” she said. “The skies were always so pretty and blue. I knew I wanted to raise my son somewhere like that.”

Thompson enrolled at Durham Technical Community College to begin her studies and later started looking to transfer to a four-year university. When she learned that Carolina had resources for students with children, like the Baity Hill apartments for families, she knew this was where she wanted to finish her degree. Thompson transferred to Carolina as a Carolina Covenant Scholar.

The journey to Carolina was a long one, but ultimately, Thompson would have to travel another 8,000 miles from Chapel Hill to hit the peak of her academic experience and set her career path on track.

In May 2018, Thompson studied in Malawi, in southeast Africa, where she learned more about human rights and democratic governance as an intern with the Centre for Human Rights and Rehabilitation, a non-governmental organization.

With the help of the Center for Global Initiatives and the Stone Center’s Undergraduate International Studies Fellowship, Thompson’s study abroad expenses were completely paid for.

Going into the program, Thompson was passionate about education policy in the United States, but her time in Malawi helped her find her niche in global education policy.

“Seeing the schools there and how the school system worked in comparison to what I was accustomed to seeing,” she said, “it definitely opened my eyes to the fact that there were opportunities to connect the two and advocate for stronger education policy everywhere.”

The experience shaped her career goals. This summer, Thompson will join the Teach for America Corps in Eastern North Carolina, preparing herself for a career as a global advocate and policymaker for education.

Carolina, Thompson said, provided her with opportunities she didn’t have nearly a decade ago.

Because she became a mom when she was 16, she had to grow up faster than most of her peers. Being a student at Carolina allowed her to regain a sense of youthfulness she missed.

“Being around so many young, bright people at Carolina has helped me feel young again,” she said. “It made me proud to be a part of something.”

For her, the accomplishment also represents a break in a generational cycle of “just getting by in life.”

“I hope to prove that barriers are meant to be broken,” she said. “If you are willing to put in the effort and make sacrifices, you can overcome any barriers to coming to furthering your education.”