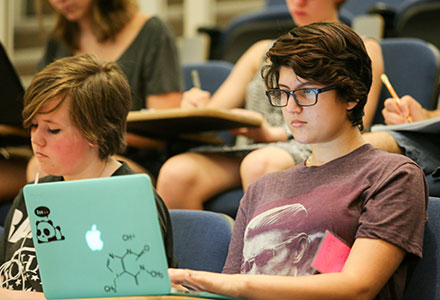 The day began by trying to figure out why a baby would possibly be taped to a wall.

After 15 minutes of contemplation and furious writing, more than 50 answers were offered, including: a lack of chairs, rambunctious siblings and the result of a bizarre night.

Odd questions with endless possibilities are being answered through poetry, dialogues or short stories this month by dozens of local teenagers who have come to Carolina for two weeks to craft their creativity at UNC CampWrite.

Hosted at the University of North Carolina at Chapel Hill, CampWrite is a student-organized day camp that aims to hone teenagers’ creative writing skills by exposing them to a wide variety of genres and providing a platform for brainstorming, editing and sharing their works.

“This is a place where I can get together with other like-minded people and just write,” said 17-year-old Tilak Lipscomb from Hillsborough, N.C., who has attended the camp for the past two summers.

Taught by Carolina students, the two-week camp, which runs from June 15 to 26, combines workshop-style discussions with guest speakers and writing exercises to develop the writers’ abilities.

“We try to expose the campers to as much of the creative writing process as we can from start to finish,” said Hannah Mickey, president of the camp.

CampWrite kicked off its fourth year last week with its largest number of participates. In the past, middle and high school students in Orange County or Chapel Hill schools attended camp, but as word of the program spread to the surrounding communities more teens from Raleigh signed up.

Founding counselor Katharine Griffiths, who helped start the program as a sophomore in 2010, said the initial initiative of Camp Write was to provide free camps.

“Giving a local based in-the-community program was our main goal,” she said. “If you’re going to start a camp for the arts, Chapel Hill is the place to do it. The community is so welcoming and supportive.”

To attend camp, teenagers had to provide a writing sample, a teacher recommendation and fill out of a short questionnaire. The application is designed to see if the camp is a good fit for the student, Mickey said.

Once camp began, participants were exposed to various writing styles including fiction, nonfiction, poetry, comics and fables. Branching out to different genres, Tilak said, has helped expand his writing abilities and interests.

“It takes you out of your comfort zone,” he said. “It helped me grow as a writer.”

During the first week of camp, counselors led discussion-based workshops on a variety of writing topics with writing activities built it to reinforce the topics. Guest speakers from publishers to professors also stopped by the camp to share their first-hand experiences.

“I always look forward to CampWrite,” said Ashley Boyette, who has attended the camp for three years. “I’m writing every day and I have people who want to edit and want to read it. It’s a safe place to read my writing.”

Unlike the typical school class, the workshops provide a small group environment where students and counselors are able to share their writing and ideas. The idea, Mickey said, is for everyone to learn from each other.

“It’s more personal here than what you could have in school,” said Boyette, a rising senior at Cedar Ridge High School in Hillsborough, NC. “People are more accepting of what you want to say. You don’t have to filter yourself in your writing. In the workshops, it’s more one-on-one, and you can have more personal growth from that.”

When campers returned for the second week, attention transitioned from instruction to actually writing.

The teens were asked to write a short piece that be could written about any topic in any style they wanted. Throughout the week, they would refine their works through peer reviews and counselor edits.

At the end of camp, all of the writing is put into an anthology that is published later in the summer.

“I’m always impressed by what they can do,” Mickey said. “Some of them are ten times better than I am. I’m amazed every day by what they do.”

For many of the campers, the anthology will be the first time their works will be printed in a book. But the goal of the camp is not to produce publishable writers, but rather provide an outlet for the students to do what they’re passionate about, Mickey said.