Peter Close, the president of the Carolina Chess Club and a junior at UNC-Chapel Hill, first became interested in chess while he was a student at Wake Tech and started watching Chess.com’s livestreams on Twitch.

When Close started his sophomore year in Chapel Hill, he wanted to dive deeper into the game, so he reached out to the Carolina Chess Club. “There wasn’t a lot of movement happening,” he says. “I contacted the current president, who was involved in other groups, and he said I could take over.”

Today, the club boasts over 70 members, with nearly half actively participating in weekly online gameplay due to COVID restrictions. In-person games — or “over the board,” as it’s called — have been a different story thanks to COVID. Victoria Sagasta Pereira, a Carolina Chess Club member and sophomore, says that the club doesn’t always stick to traditional play. Sometimes they do team play, where the club breaks into two groups and competes.

“Or ‘hand/brain chess,’ which is really fun,” says Sagasta Pereira. “You’re in teams of two, and you’re not allowed to communicate with your partner. You have to say a piece, and then your partner has to decide what move to make.” 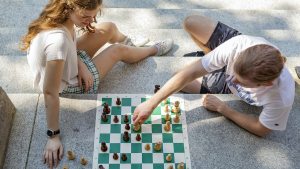 Carolina Chess Club president Peter Close plays a game with club member Victoria Sagasta Pereira on the steps of Wilson Library on July 30, 2021, on the campus of the University of North Carolina at Chapel Hill. (Johnny Andrews/UNC-Chapel Hill)

Sagasta Pereira first became interested in chess in high school. “It’s kind of an awkward story,” she says. “I had a crush on a boy my junior year of high school. He was in chess club. I considered learning how to play so that I could join chess club and spend time with him there, but never followed through. I dated him senior year, and I said, ‘You never taught me how to play chess!’ He eventually taught me to play but we broke up after that.”

She didn’t play much in between high school and the start of her first year at Carolina, but by January, she knew she wanted to join a club and socialize more. “I was like, ‘I know it’s COVID, but I really should be part of something.’ I was looking through clubs, and I was like, ‘Oh, there’s a chess club.’”

She says, “It’s a very nice group of people.”

The club has taken advantage of Zoom by inviting world-renowned players to speak at meetings. “I was able to get a talk with Danny Rensch, who’s the vice president of Chess.com,” says Close. “He’s an international master.”

Close plans to invite more professional players to talk with the group this academic year. “We can get these talks from grandmasters because they don’t have to fly out here,” he says.

Close has also been talking with Duke’s chess team about establishing a friendly partnership and competing against each other. “We’ll travel to Duke sometimes, and they’ll travel here,” he says. “We’re going to have it so that we can do a lecture and learn chess together. It’s not necessarily just competition.”

While chess can be intimidating, especially for those just learning the rules, Close wants anyone interested in joining to know that the club is all about having a good time. “It’s very beginner-friendly,” he says. “A lot of people are afraid of chess. We’re here to have fun. We’re also going to have a lot of food. Food’s important.”