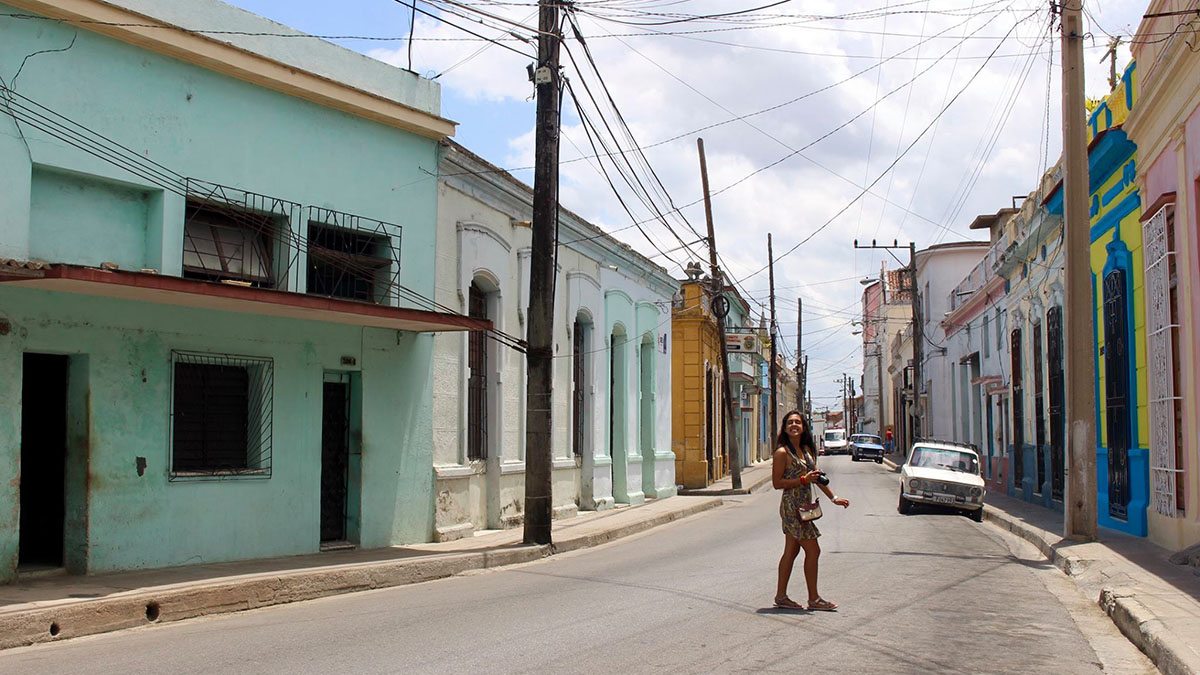 Gabriela Alemán’s mother was only 3 years old when she fled Cuba with her family on the heels of a revolution, leaving behind everything she knew.

When Alemán was a young girl in Miami, she remembers looking out across the horizon of the Atlantic Ocean, feeling like she could almost reach out and touch the city where her mother once lived. One day, she thought, she would find a way back.

And at Carolina, she did.

“I always had this dream that I would be the first one in my family to go back,” she said. Alemán, a Latin American studies and public policy major with a minor in creative writing, is set to graduate from UNC-Chapel Hill on Dec. 16. “So, the study abroad program in Cuba was one of the reasons why I really wanted to come to Carolina.”

She connected with the Argentinian side of her genealogy by visiting relatives in Argentina throughout her childhood, but Cuban culture and politics always seemed just out of reach. At UNC-Chapel Hill, she would finally have the opportunity to explore her interest in Cuba firsthand.

Alemán took advantage of several of Carolina’s other global opportunities first. She ventured to Sri Lanka and Bali with support from the Campus Y’s Global Gap Year Fellowship before her first-year in Chapel Hill and studied Portuguese in Brazil during her sophomore year.

“In terms of exploring other cultures that weren’t my own, the first time I got to do that was at UNC,” she said. “It was really eye-opening.”

Each new opportunity built her confidence as a solo traveler, and pointed her back one of the reasons that led her to Carolina to begin with.

“Being in Asia especially made me realize that as much as I loved learning about Asian cultures, I did feel this kind of homesickness and nostalgia for my own culture and my own roots,” Alemán said. “That experience influenced me to study Latin American countries because I was at an institution that could really teach me more about these cultures in depth, and that was so exciting to me.”

At Carolina, she dove into Latin American studies, learning to become a policymaker who could help bridge the gap between the United States and its neighbors to the south.

Then the day came last spring when she boarded a plane to Havana with UNC Study Abroad. In some ways, she said, it felt like returning home.

“It was pretty surreal in a lot of ways, being the first in my family to go back since the ‘60s – just creating that connection and opening that topic up again within my family,” she said. “My sister and my mom came to visit me, and we went to see the city where she was born and the house she lived in. It was a huge event for my family.”

But in other ways, the experience revealed the disparities between the Cuba of her imagination — the one she learned about in high school textbooks and documentary films — and the reality of a complex nation. It’s a lesson Alemán will carry with her into her career as a policymaker.

“Being there made me realize that the way U.S. policy and history is taught to us in high school, we think about Cuba — and a lot of countries, really — in very specific and sometimes very dismissive ways,” she said. “In reality, they’re wonderful, brilliant, resilient people who have created unbelievable ways of surviving and thriving. If I want to be an effective policymaker, I have to respect that and get to know and truly understand all the players involved.”

After graduation, Alemán is planning to work in Cuba, and later to split her time between Cuba and Miami working on Cuba-related policy issues. In parallel to her own family’s story, she hopes to be part of an effort to rebuild the ties between the two countries.

If there’s one thing her Carolina experience has taught her, it’s that finding common ground is never out of reach.

“UNC-Chapel Hill has given me a platform to meet people with different perspectives and backgrounds, and that’s huge,” she said. “Even though we grew up in radically different ways, we still found ways to connect, and that has given me a clearer perspective and filled me with a lot of hope.”