Whether it’s sipping from the Old Well or watching the Bell Tower lighting the night before the first day of class, there are numerous timeless traditions at Carolina.

But traditions need care in order to carry on. The Order of the Bell Tower, the oldest General Alumni Association student group, has been dedicated to bolstering those memorable moments for Tar Heels since it was first chartered in 1980.

Group members pride themselves on being “official student ambassadors and tradition keepers to the University.” They’re tasked with helping current students understand and experience all that’s special about Carolina.

Rising senior and biostatistics major Lexi Bell first learned about the Order of the Bell Tower as a first-year student. She was raised with a deep love for Carolina thanks to her parents, who both attended the University. 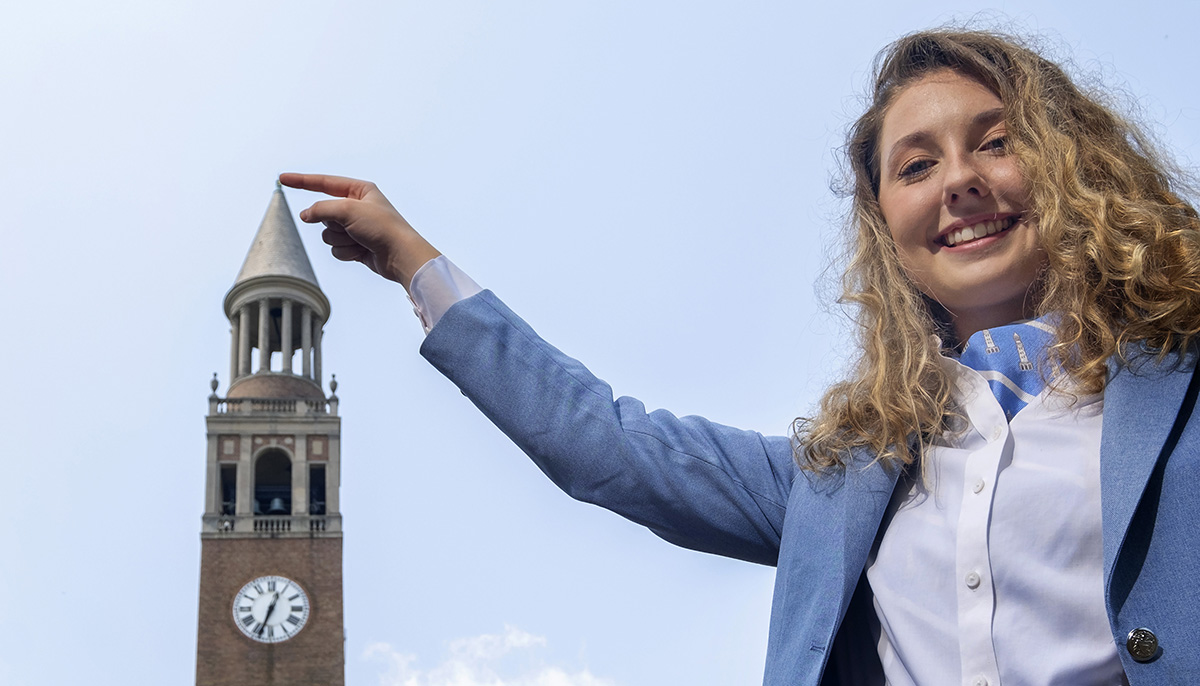 “Tradition was something that was instilled in me from a young age,” she says. “When I heard that the mission statement was to connect past, present and future Tar Heels, and a way to get people involved in the traditions of Carolina, I thought ‘This is the perfect fit for me!’ I love to do all the things that are considered traditions on campus.”

It also helped that her last name rang true to the group. “My last name is Bell, and when I mentioned the opportunity to my parents, they encouraged me to apply,” she says. “I did more research into the program, and I thought it was a great way to meet people.”

Bell went from being a member her first year to serving on the leadership council her sophomore year. In her time with the group, she has helped plan events, shared her knowledge about Carolina’s many distinctive traditions and overseen Shadow Days, where high school juniors can experience a day in the life of a Tar Heel.

Order of the Bell Tower members find ways to make sure current Tar Heels know about their place among the University’s storied history. Taking a sip from the Old Well is special for any student, but it connects them to all Tar Heels who have come before.

“It’s really cool to participate in traditions that other Tar Heels who were here before us have experienced,” Bell says. “It’s a way to link us as a body.”

Beyond the established traditions like the relighting of the Bell Tower, they’ve also started a few new ones. “We do Waffles at Wilson,” says Bell. “It’s great to get people excited about the University and its history on University Day. Plus, you get free waffles.”

The group also began lighting the Bell Tower after every football win – both home and away. “This provides a legacy for the football program similar to that which the basketball team gets when we beat Duke and rush Franklin Street.”

Part of that inclusivity involves making sure the group finds diverse student members who love Carolina and want to see it flourish. “That’s our job,” says Bell. “We want to model the university in a light where people are excited to be here.”