Among the 20 million volumes held in our University Libraries’ Southern Historical Collection are Valentine’s Day cards and love letters from the past two centuries.

A pop-up card from the 1800s, a diary entry about a forbidden relationship and lipstick-kissed love letters between a couple who would go on to be married for more than 60 years are all preserved in Wilson Library for future generations to study and learn from.

“These Valentine’s cards are expressions of love between two people, and they have the power to humanize the past and generate some empathy for historical figures,” says Chaitra Powell, curator of the Southern Historical Collection. “Sometimes, we can get caught up in the big historical narratives and lose sight of the individuals who were living their lives, just like we are. These cards are one way to humanize the archives, and they are great visuals for exhibitions and classroom instruction because of their ability to draw general audiences into the narrative.”

Continue reading to see how previous generations celebrated the holiday and get inspiration from the past on how to celebrate your Valentine this year. 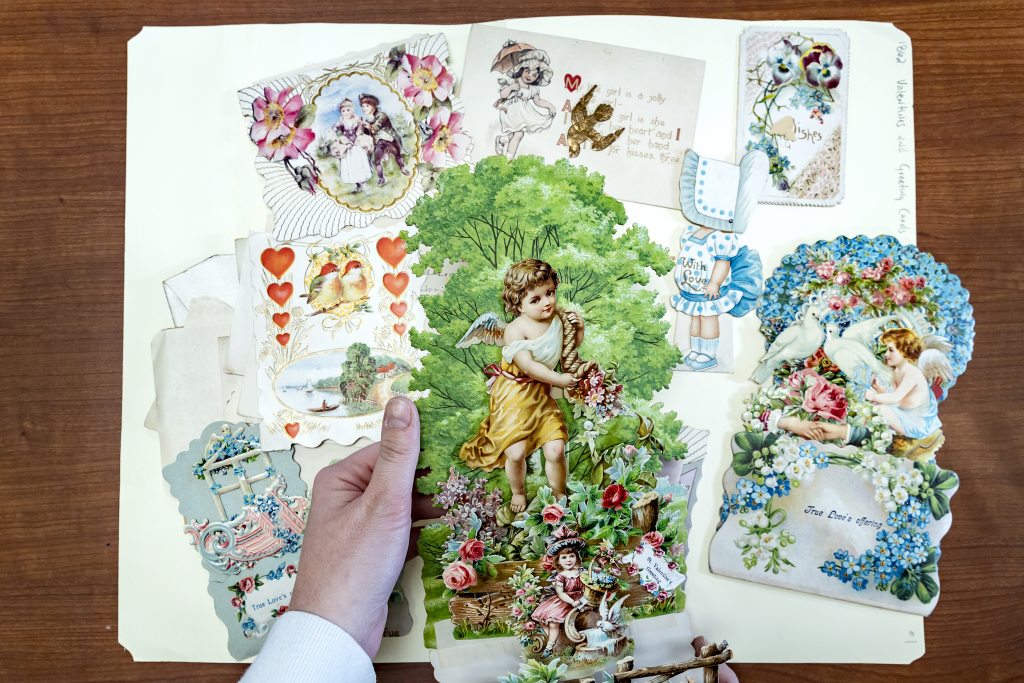 One collection of store-bought and homemade Valentine’s Day cards dates from the 1850s to the early 1980s. The different motifs include pairs of birds, hearts, flowers and Cupid and illustrate how the ideals and attitudes around the holiday changed over time. Most of the items are not signed or addressed, so it’s unknown if the senders’ affections were reciprocated. 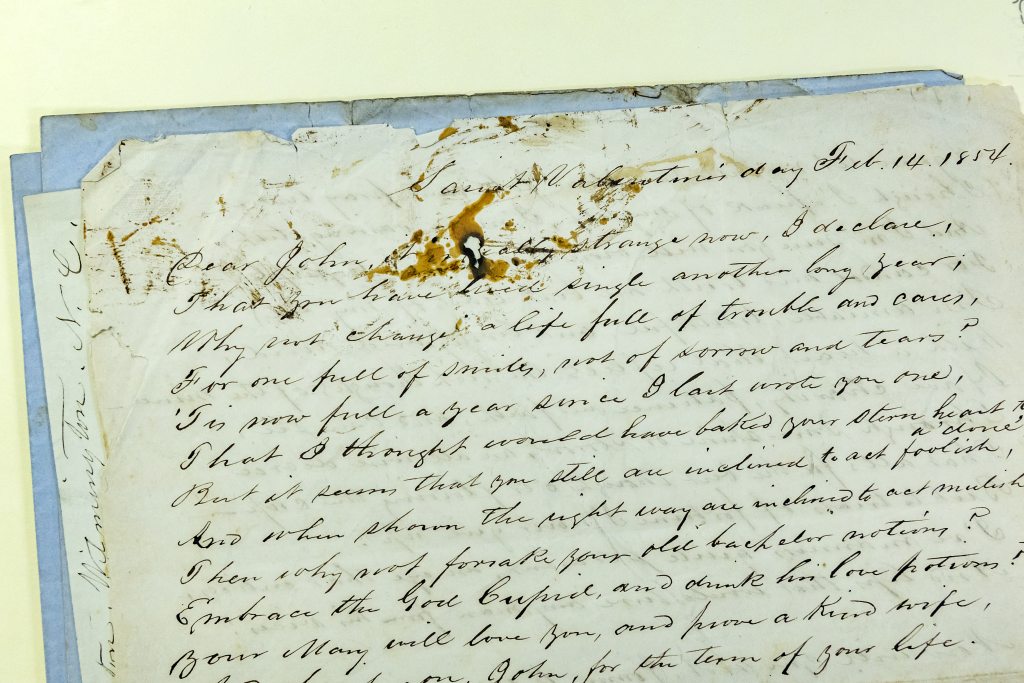 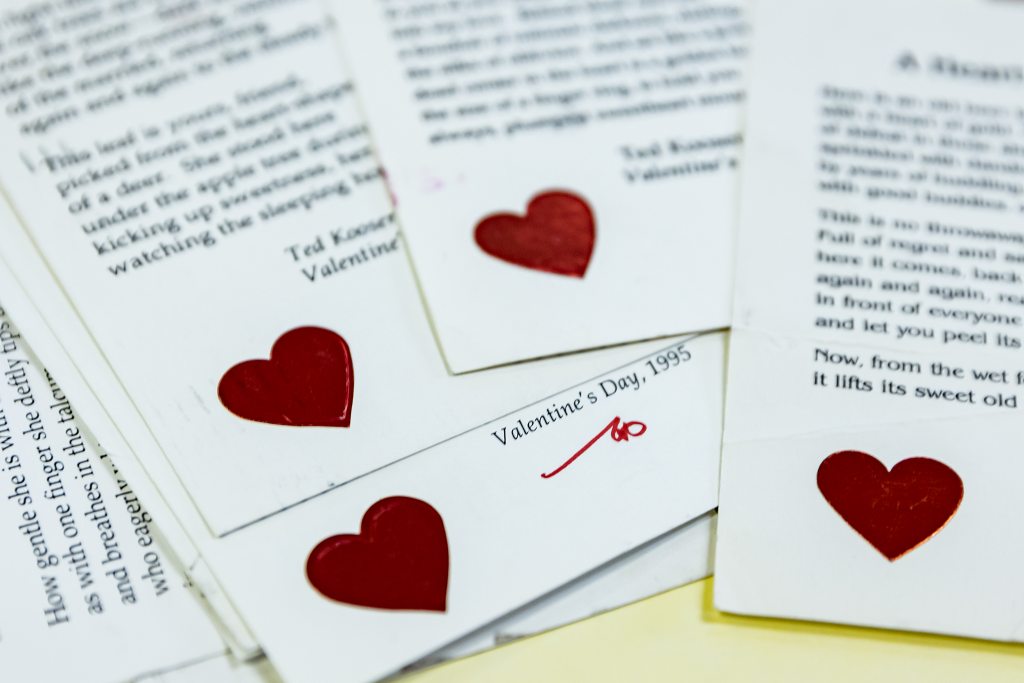 These Valentine’s Day cards were sent by Pulitzer Prize-winning poet and Poet Laureate of the United States of America Ted Kooser to Sallie Nixon, a North Carolina native and president of North Carolina Poetry Society. Kooser mailed an annual card with a Valentine’s Day poem and metallic heart to his frequent correspondents, and this collection contains cards from the 1980s to the early 2000s. In his 1999 poem, he shares these words of wisdom for anyone without a Valentine: “If you feel sorry for yourself this Valentine’s Day, think of the dozens of little paper poppies left in the box when the last of the candy is gone.” 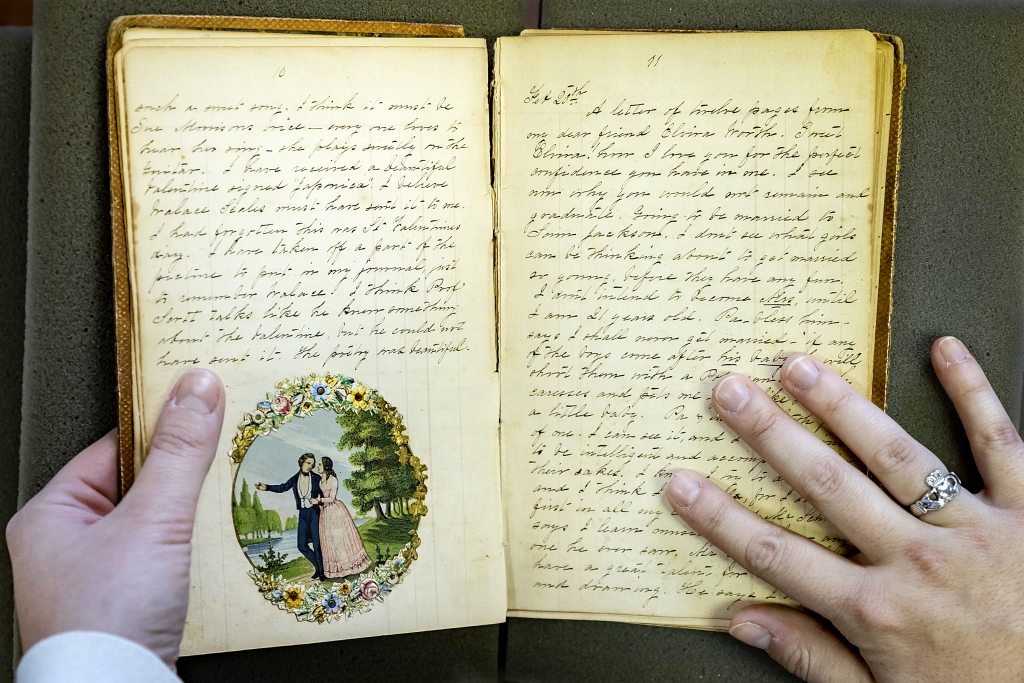 The diary of C. Clay Dillard contains an entry written on Valentine’s Day and includes a pasted clipping from a romantic card. Dillard was born in Lynchburg, Virginia, in 1839 and graduated from the Edgeworth Female Seminary in Greensboro, North Carolina, in 1856. Her diary contains entries from 1856 to 1863 about her classes, friends and teachers, and notably her romance with William Lafayette Scott, a teacher at Edgeworth whom she wrote about long after the relationship was terminated by family members who considered him to be of inferior social status. 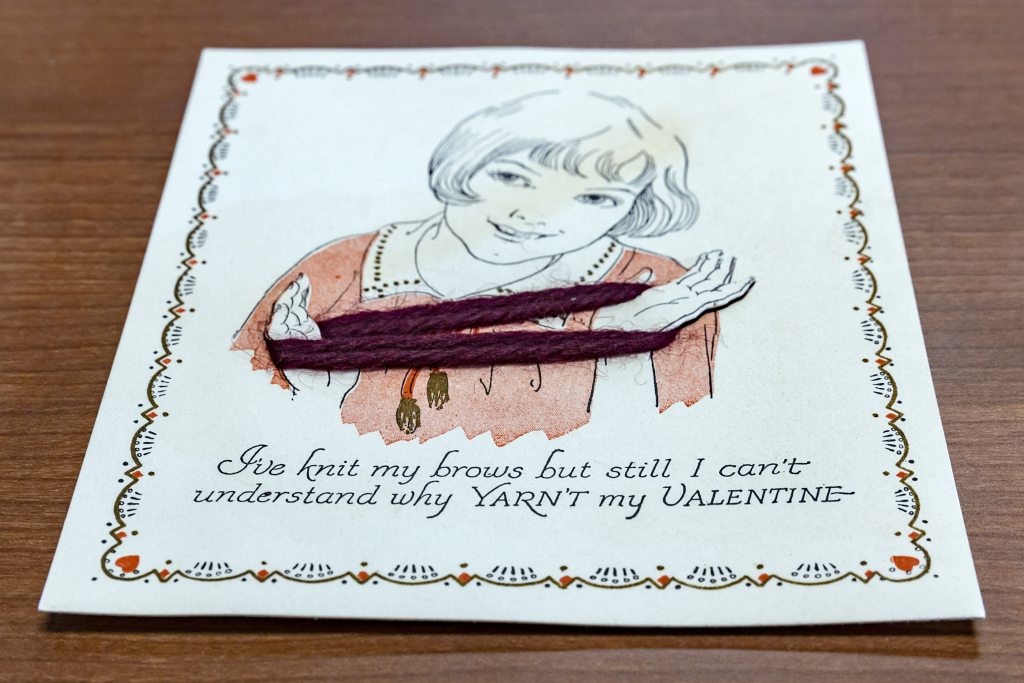 This three-dimensional pun-inspired Valentine’s Day card is part of the Fox and Simon Family Papers, a collection of family correspondence dating from 1862 to 1991. The collection contains letters, photographs and other papers documenting five generations of the Fox, Simon, Whiting, Cherrie and McMillan families. The contents document married life in the early and mid-20th century and include love letters and holiday cards —like the one above — sent between the family members. 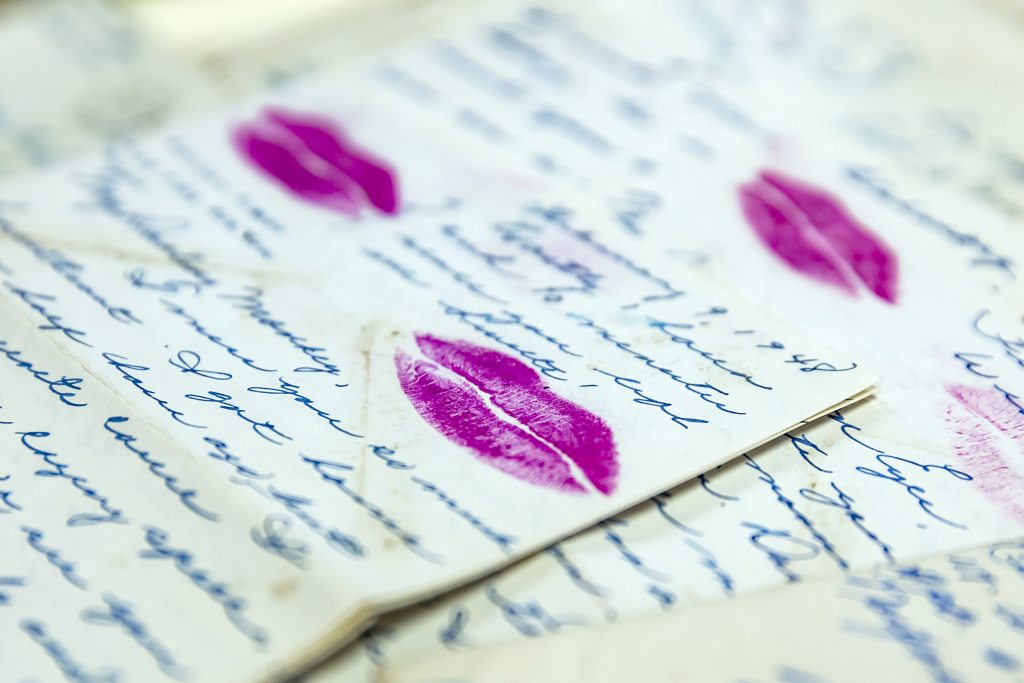 These love letters were written by Paula Rosengarten and sealed with a kiss before being mailed to Ben Marks over the course of their three-year courtship after meeting in October 1947. These letters describe their daily activities, work, school, family, friends and life in the South at the time. Rosengarten lived in Virginia and Marks attended business school in the Baltimore and Washington, D.C., area throughout their courtship, so these letters were their primary means of communication. They were married from August 1950 until Rosengarten’s death in 2011.