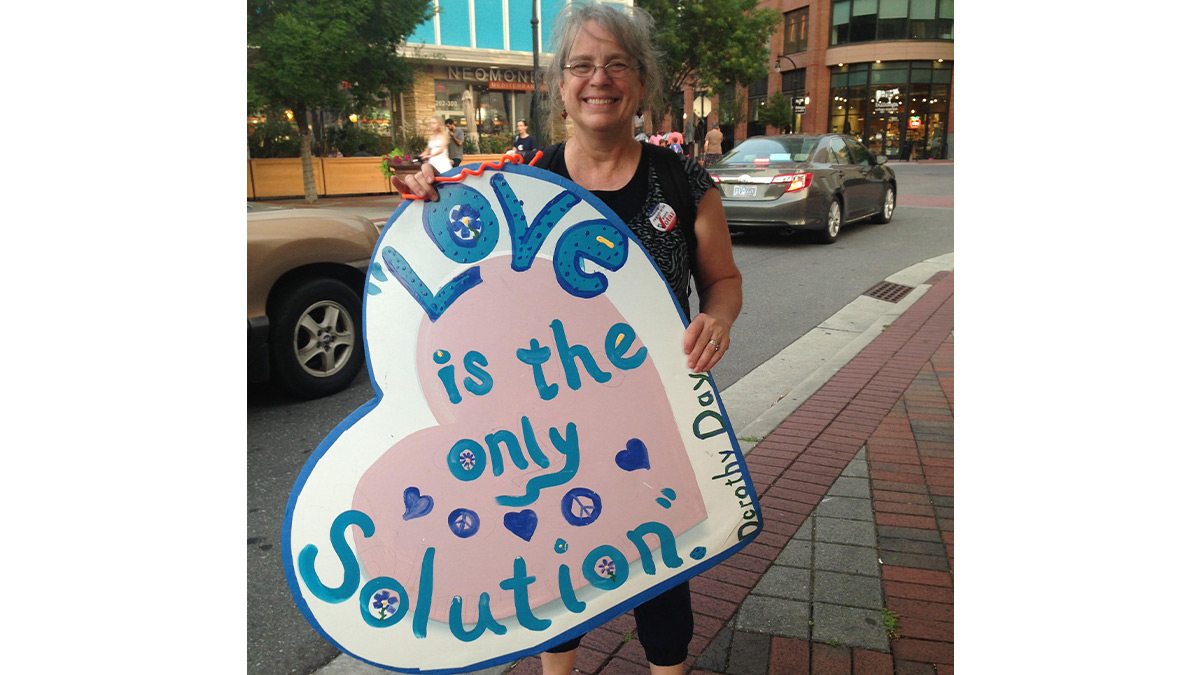 When Mary Grace was in her late teens, a four-year college was out of reach. Roadblocks to higher education were everywhere.

“It was the 70s, and we couldn’t figure out the money or the path,” she said. “I was one of eight children, and I had to make my way. In my world, a young woman would not often be seen as someone with those possibilities.”

Grace, who is now 64, grew up in a family with strong faith, which led to a heart for service. She also developed a deep commitment to social justice. As she followed those callings, she found a lifetime of education. She’s been an activist, a mother, a teacher, a student and a world traveler.

And, now, she’s a Carolina student.

“When I get to campus, I’ll have a button on my backpack that says: ‘I’m old and learning new stuff,’” Grace said.

And, the student body might learn a thing or two from her.

After earning an associate’s degree in physical therapy in 1976, Grace joined the United Farmworkers Union to work in Washington, D.C., and California as an organizer.

“That was all such an education – in American history and labor, Chicano history, agricultural and immigration disparities, and diversity. I saw it all just because I said ‘yes’ to this life. This context of living history was fascinating. We were working so hard to make real what most of us say we believe in – peace and justice.”

Grace met her husband, Sebastian, when he successfully represented her after she was illegally arrested for free speech outside the Pentagon. Sebastian also took a different First Amendment case to the Supreme Court after Grace and a friend had been threatened with arrest. In 1983, they won United States v. Grace, which struck down a federal statute prohibiting picketing and the distribution of leaflets on the public sidewalks surrounding the Supreme Court.

Grace continued her work in activism, visiting Iraq to observe nonviolent conflict resolution in a war zone and teaching English in South Sudan. She later returned to South Sudan to volunteer with a women’s fair-trade cooperative and helped organize a conversation with administrators and educators on public schooling in South Sudan, specifically integrating alternatives to violence and war.

“I’ve had all these adventures. One adventure after the other. I’m ready for more.”

Four years ago, Sebastian was diagnosed with cardiac amyloidosis, a chronic condition. They moved to Durham so he could be treated at Duke University, and so they could be closer to their children, who are both high school teachers in Durham, and their grandchildren.

Grace just completed her second associate degree at Durham Technical Community College, where she received numerous awards. When it was time to transfer to a university, she had her choice of a number of top schools.

She found herself drawn to Carolina, she said, “because the staff were exceptionally engaging, affirming and exceedingly helpful in all interactions.”

She said that Carolina has the vital combination of professional knowledge and skills with personal interest and connection. She is excited about using the interdisciplinary studies major to craft her own education, as she’s done for so long.

“I plan to create my own major around studying trauma and resilience, with a likely minor in conflict resolution. Because of what I’ve seen across the world, and what I know now about science and health, I’m really interested in adverse childhood experiences and how they affect the body itself – the ability to think and learn and heal. I need to study more and use what I learn to continue to be more helpful to my community. We experience what I see as very stressful times in our world, and healing connections with each other are key. “

Grace will start this fall with Carolina Away, a program for first-year and transfer students that will allow her to take her courses online and participate in small-group experiences with classmates, faculty and staff.

Over the summer, she’s kept her eye on the kinds of opportunities Carolina is offering for students and alumni to engage in discourse around racism, equality, the Black Lives Matter movement and other issues of justice for which she’s been working her whole life.

“I’m looking forward to being part of these kinds of engagements with other students. I’m well-rooted in this work, but to see this being offered to young people at such pivotal points in their lives is heartening,” she said. “I’m profoundly excited to be in a place where I can witness young people engaging in this way. Working for good – that’s where we have to put our hope.”