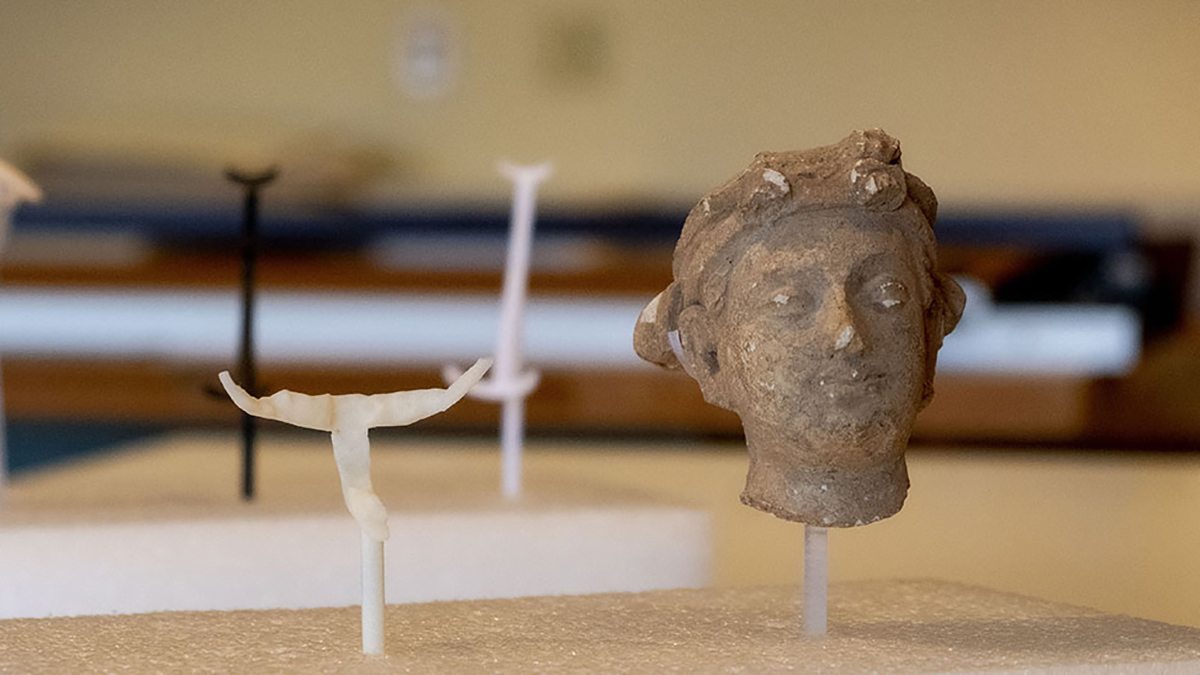 Ackland Art Museum preparator Joel VanderKamp carefully examined the fist-size Buddha head, recently returned from an out-of-state exhibit. He wore disposable black nitrile gloves to protect the fragile 2,300-year-old Indian sculpture from contact with his skin. And he made no sudden moves.

Like all museum staff members, he knows the law of probability: The more you touch a piece, the more likely you are to damage it.

“That’s what you try to avoid,” VanderKamp said. “You try to handle stuff as little as possible.”

As a preparator, VanderKamp is a jack-of-all-trades when it comes to putting items on display—designing and building pedestals, putting up and painting temporary walls, soldering metal mounts and nailing together wooden crates. He likes it that way, recalling a previous job when all he did was “hang a painting on the wall.”

But occasionally he runs into tricky situations, like how to create a mount that precisely and securely fits a delicate piece while handling the artwork as little as possible.

VanderKamp demonstrated the problem with a brass mount used to display a plate. “You heat it and bend it and form it and keep doing that. Then you set the plate in it and it doesn’t fit quite right, so you have to do some fine-tuning,” he said.

Another option was to place a soft lump of epoxy on a table, cover the epoxy with a protective layer of nonstick paper then press the object into the epoxy until it cures—about 72 hours.

An app for that

So when he saw an email encouraging Carolina faculty and staff to learn to use newly created makerspaces across campus, he began to think of ways that training would help him do his job.

“I saw that they had a laser cutter and 3D printing, and I thought there’s got to be an application for things we do here, so I went to do some trainings at the Hanes Art Center makerspace,” he said.

One of his first ideas was to use a 3D printer to create custom mounts made of resin or plastic. But to do that, he needed a 3D image of an object. Since he works for Carolina, he was able to install a free version of Autodesk Fusion 360 through the University’s educational license and get training at
the makerspace.

Brad Erickson, a graduate student in religious studies who also works at the Kenan Health Sciences Library makerspace, helped him to scale his model to the right size. “He’s been using 3D imaging software since he was 13,” VanderKamp said. “I can ask him anything and he knows.”

“He gave me an hour and a half of his time,” VanderKamp said. “He didn’t have to do that.”

To create the mount, VanderKamp first took 50 to 70 photos of the art object from every conceivable angle. He then ran those images through the 3D software to make an exact model of the object. He put that model into the 3D design software and, starting with a series of virtual cylinders in a T-shape, deleted pixels from the mount image until it exactly matched the contours of the object. Then he sent that image to the 3D printer, which layers resin into the shape of the mount he had designed.

“It fits perfectly, like a glove, to that object,” he said, holding up the translucent mount and carefully placing the Buddha head inside it.

The process isn’t right for every art object. The reflections in images of shiny ceramics cause glitches in the 3D software, for example, and the flexible resin or plastic mounts get even less rigid over time. “You cannot rely on this mount for the long term,” VanderKamp said. “Its application for me is an object that is small, lightweight and fragile and that is only going to be displayed for a short period of time.”

Other museums use 3D modeling and 3D printing to create custom mounts, but most are larger in size and endowment funding. Ackland staff have been able to take advantage of being on an entrepreneurial campus like Carolina’s to do more with less.

“I just wouldn’t be able to afford to do this at another institution,” said VanderKamp, who has worked in the preparator field for 20 years, the last five of them at Ackland. “I could not have explored this anywhere I worked in the past. It just wasn’t possible.”