Home to more unique species than anywhere else on Earth, the Galapagos Islands have been an ecological haven for studying animals, marine sciences and biology since Charles Darwin first set foot there in 1835.

For generations, the islands’ ecosystems lived in isolation, preserving the environment and its ecosystem. But now, the islands are also home to 35,000 Ecuadorian residents and the destination of hundreds of thousands of travelers, creating a human-environment system that alters nearly every aspect of life in the Galapagos Islands.

“Whatever people are doing, they’re impacting the environment in some way, and the environment reacts through complex interactions,” said Stephen Walsh, Carolina’s Lyle V. Jones Distinguished Professor of Geography, and the founder and director of the Center for Galapagos Studies. “The reaction may be through a movement of species to newly available habitats or the introduction of invasive plants into human use zones, but there’s a strong feedback loop that links people to environment and environment to people through evolutionary and adaptive behaviors.” 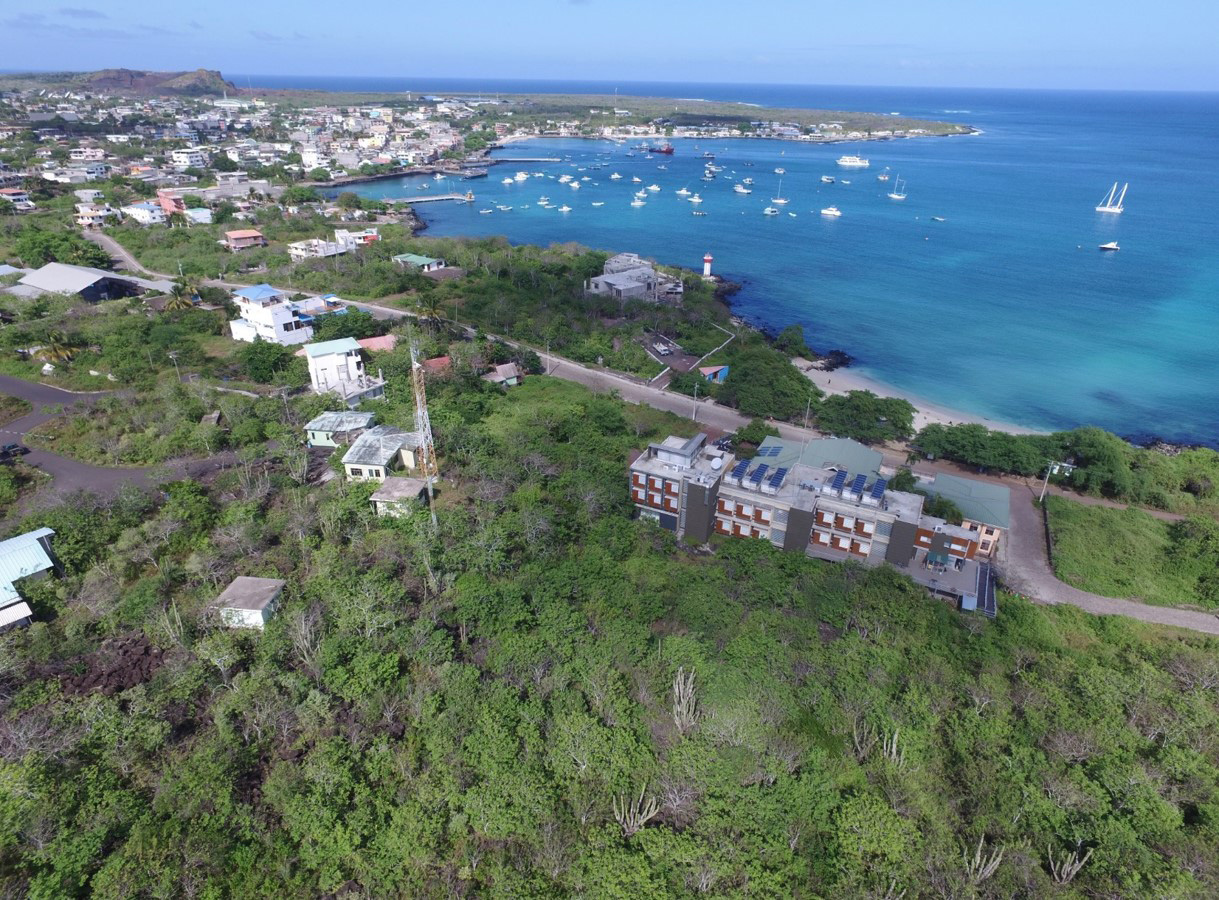 An aerial view of the Galapagos Science Center.

For the past 10 years, Carolina researchers have been shining a light on the challenges presented by human interactions on the islands and working to find the right balance between helping the islands’ economy to thrive under tourism and protecting its iconic species.

Understanding those human-environment interactions on the islands has been the core mission of the Galapagos Science Center, a research facility that is jointly run by UNC-Chapel Hill and the Universidad San Francisco de Quito in Ecuador. The research facility that opened in 2011 on Isla San Cristóbal is the only university science facility of its kind in the Galapagos, supporting interdisciplinary studies on population, health and environment by examining the social, terrestrial and marine subsystems of the islands.

Among the research conducted at the center is Walsh’s spatial simulation modeling that is helping Ecuadorians and managers of the Galapagos National Park and Marine Reserve find the proper balance in protecting the islands’ fragile ecosystems and enhancing the lives of the human population. Over the years, the modeling, which takes the form of “what if” scenario of change, has directly helped the Ecuadorian government adapt policies that protect the islands while being cognizant of the needs of resident’s livelihood alternatives.

“The Galapagos is a place where globalization has played a strong role in shaping human-environment interactions,” Walsh said. “For years, geography protected it as isolation limited its connectivity to the mainland and to other island archipelagos. But now, with modern transportation and population migration, how do we go about isolating it? You can’t any longer. The only way to get into the things that are shaping the sustainability and the future of the Galapagos is to have a human-environment perspective, and to develop models to help decision-makers consider alternate futures for the islands.”

Finding that balance is what Walsh calls the “Galapagos Paradox.” The economy is driven by tourism, so for the islands to thrive, tourism must continue. But at the same time, the increase in people visiting and living in the Galapagos is damaging the very environment tourists are traveling to see. As tourism increases, so does the population, with residents migrating to provide services through jobs in the burgeoning tourism industry. 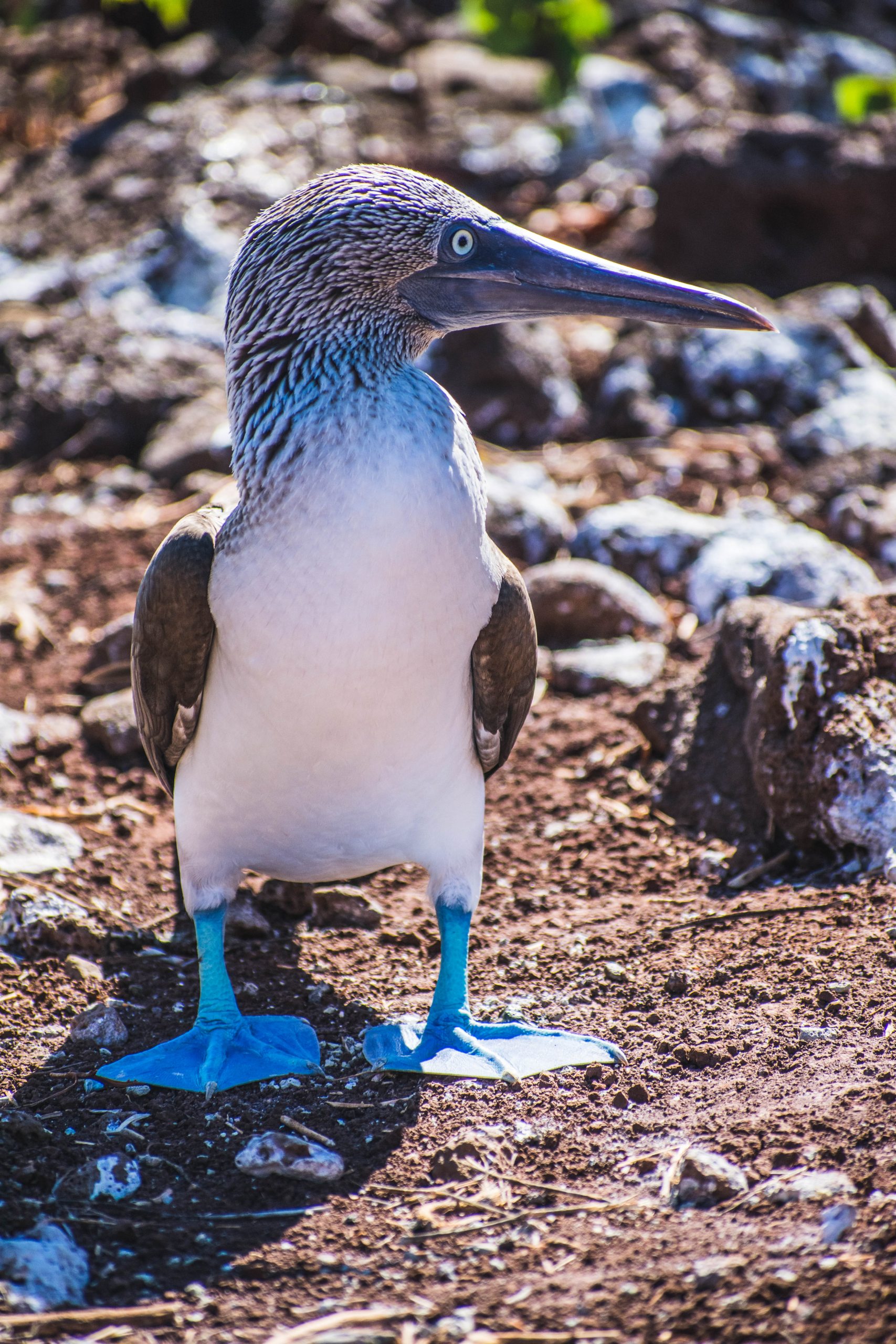 A blue-footed booby in the Galapagos Islands.

“People want to come in and see the preciousness of the landscapes, the iconic species, the giant tortoises, the hammerhead sharks, the marine iguanas, the Galapagos penguins,” he said. “How do you protect a place where people want to go and experience its specialness of species and landscapes, but at the same time, by being there, degrading the very necessity of protection?”

A key question for solving that paradox is understanding the carrying capacity of the islands — how many people could be allowed on the islands before the environment begins to degrade? Over the years, Ecuadorian government leaders have been pushed to allow more tourists onto the islands in an effort to boost the local economy. To understand what that would mean for the environment, the government turned to Walsh and Carlos Mena, a former doctoral student of Carolina. Mena now serves as the co-director of the Galapagos Science Center alongside Walsh.

Walsh and his team created a methodology that allows them to understand integrated systems in the Galapagos, the various implications of more people on the island. Using data that characterizes land cover and land-use change, resident and tourist population projections, transportation patterns, and fisheries, the team created “what-if” scenarios that paint a picture of the ecological consequences of increased tourism, population growth and climate disturbances.

“It’s basically turning the Galapagos into an electronic laboratory where we could perturb the model in a variety of ways — more El Niño events, less El Niño events, more tourists, fewer tourists, more urban development, less urban development,” Walsh said. “The goal of the model was to create outcomes that decision-makers could interpret, understand and make policy decisions accordingly. We let the data speak for itself through generated maps, graphics and scientific visualizations.”

Following the projections Walsh and his team laid out in their study, the Ecuadorian government began to adjust policy to follow a low-growth scenario that would hopefully both protect the environment and keep the islands open for business. The key to allowing both to happen, Walsh said, will be to control the number of people entering the islands and potentially encouraging people to stay longer — an option that would help the local economy thrive while cutting back on additional visitors.

While the scenarios Walsh created at the Galapagos Science Center help conserve the environment of the Galapagos Islands directly, he also hopes that the research could be used to solve similar issues facing other islands around the globe.

To extend his research outside the Galapagos Islands, Walsh developed the International Islands Network of Networks, a collection of global islands and research institutions for comparing the forces that shape island ecosystems and threaten island sustainability.

“If we can crack the nut in the Galapagos and find a way to create a balanced perspective to development and conservation, might that approach be applicable to other similarly challenged island ecosystems around the globe?” Walsh said. “How do we export what we know in the Galapagos? How do we also take that and move it around the planet? The Galapagos Islands are a microcosm of global island ecosystems, and the Galapagos Science Center is crucial to solving challenges both in the islands, but broadly for all vulnerable and fragile settings across the globe.”