Professor Bob Goldstein began making gig posters to advertise biologists giving on-campus talks about their research in 2004. Since then, he’s made about 100 of them, fusing his love of art and science.

“There’s such a strong music scene around here, and I’ve always admired the gig posters that artists were making,” said Goldstein, the James L. Peacock III Distinguished Professor in the College of Arts & Sciences’ department of biology. “They go up on telephone poles and get rained on — it’s completely ephemeral art — but people love them.”

In the early days, Goldstein partnered with The Merch, a custom screen-printing and design shop in Carrboro, to print the posters. University Libraries is collecting copies of each of them. And he teaches a course with art professor Beth Grabowski (offered again this fall) on “Art and Science: Merging Printmaking and Biology.” 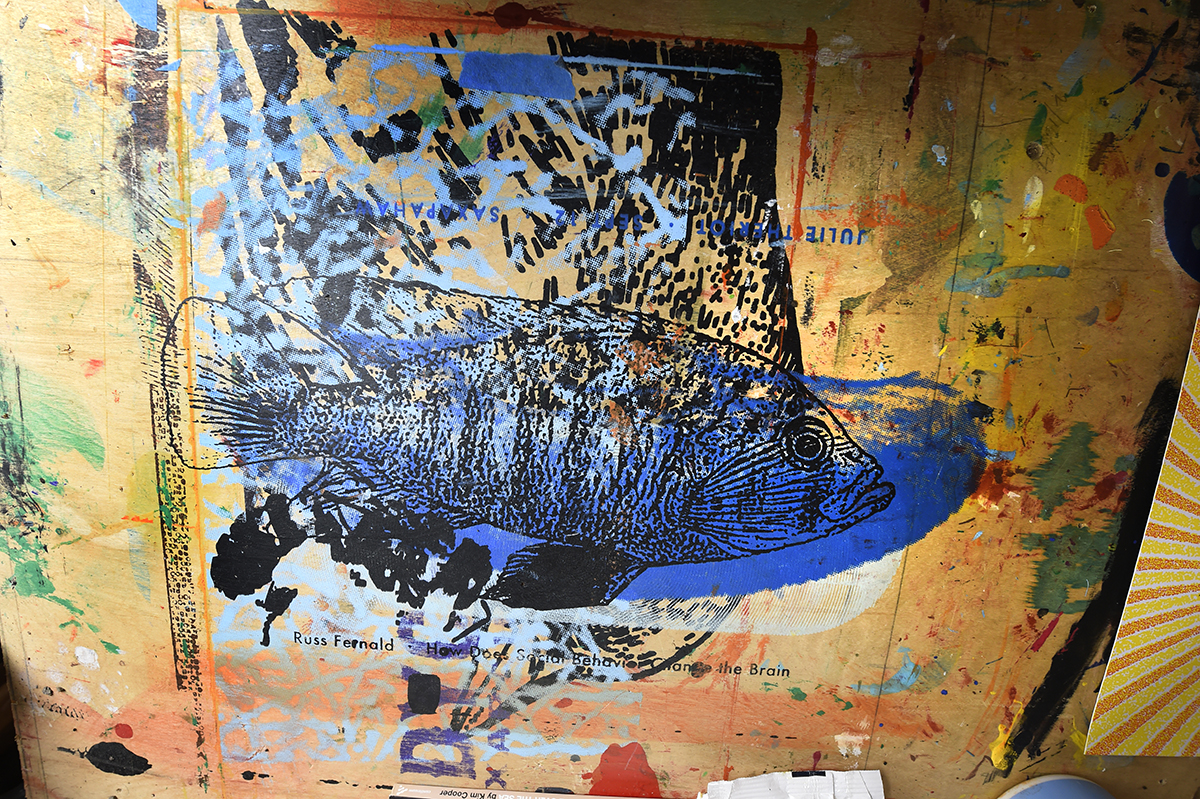 A screen print of a fish on Goldstein’s working table. (Photo by Donn Young)

A number of years ago, after encouragement from friends, he started screen-printing the posters in a shed behind his house on weekends. “My kids and I learned to screen print together, and they helped with many of the early posters,” Goldstein said.

He begins the artistic process by learning about the science. He told Fast Company magazine in 2019 that “learning about diverse fields of biology helps inspire creative ideas within my own field.”

“Usually something clicks, and I try to represent that,” Goldstein said. “Then I’ll start drawing it out on paper or in Photoshop or Illustrator. Quite often I’m trying to do something technically new to me as well.” (Case-in-point: For a poster featuring an Italian scientist who made a discovery about tiny proteins that move along tracks like trains, he designed a poster featuring a locomotive with LED lights — powered by a watch battery taped to the back of each poster.)

On March 23, the department of biology hosted Kizzmekia Corbett for a virtual Distinguished Alumni Lecture about vaccine development. Goldstein designed a poster featuring a vaccine vial with rays of sunlight coming out of it. The rays are in a stipple pattern, and he wrote a program that would allow him to create the small dots that make up the rays. (Carolina alumna Corbett’s team at the National Institute of Allergy and Infectious Diseases partnered with Moderna to rapidly create a COVID-19 vaccine. She’ll team up with Anthony Fauci to deliver the virtual spring Commencement address.)

When the pandemic hit and many talks went virtual, Goldstein shifted much of his artistic output to public awareness messaging around COVID-19. 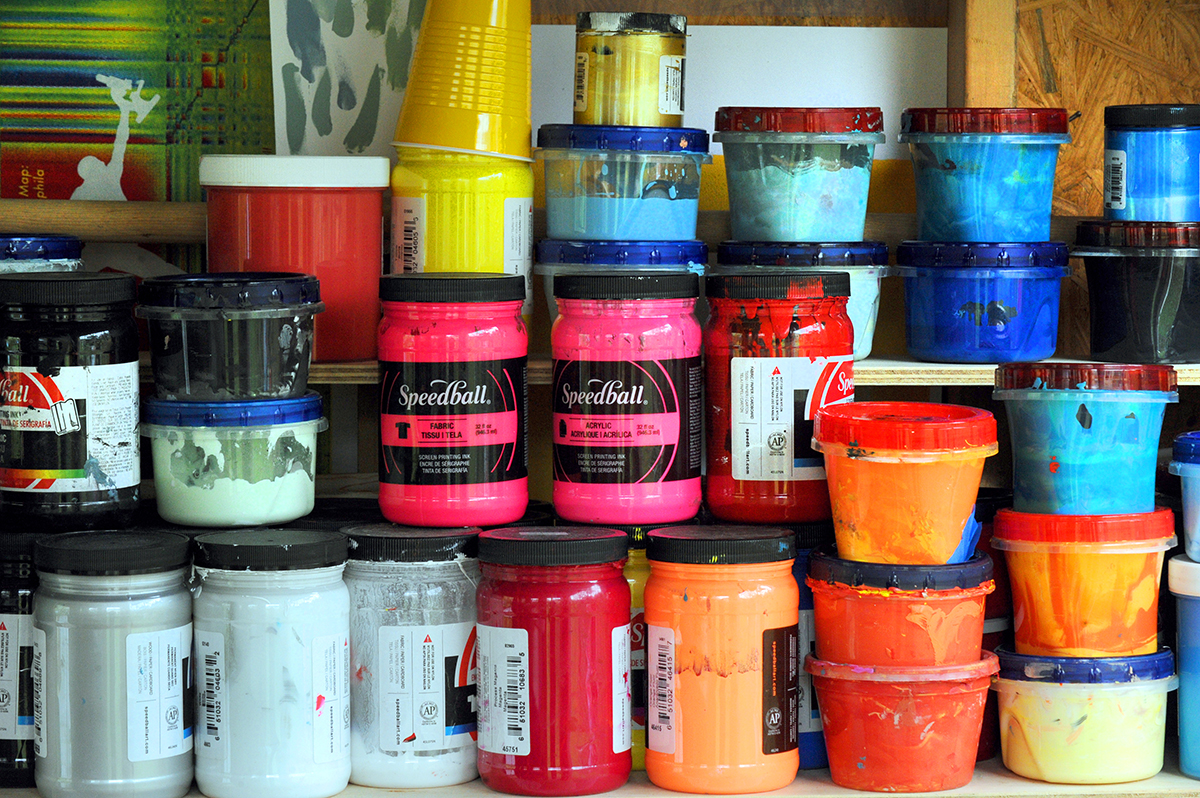 Containers of paint line a wall in the shed. (photo by Donn Young)

He also printed signs (initially on Carrboro’s Neal’s Deli takeout bags, later on cardstock) encouraging people to “mask up and buy takeout.” Local restaurants put the signs in their windows.

“I wanted people to know that you can keep yourself safe andsupport the economy,” Goldstein said. “This was my way of saying, ‘Your favorite restaurants still need you. And they will close if we’re not buying food from them.’”

Look up on telephone poles as you drive or walk down Franklin Street. As you get closer to Carrboro, you’ll notice one of his latest creations — a vertical screen-printed poster on light gray paper with an image of the coronavirus at the top. Over time, as sunlight fades the paper, the virus image disappears, and at the bottom, a COVID-19 vaccine vial pops into view. Goldstein and his son put up the posters (which were originally black) on Jan. 1.

“It will go from an image of the coronavirus to an image of the vaccine in about six months,” said Goldstein, who calls these his “hope prints.” “To me, it was like planting bulbs; it feels hopeful.”

As Carolina celebrates Arts Everywhere Day on April 9, Goldstein embraces this mashup of art and science. He appreciates his friends who have artistic and creative passions.

“We have a really vibrant community of local printmakers,” he said. “It’s also helped keep me sane to do something with my hands.”