A boy, 11, crosses two miles of open water on his own for the first time. His sun-bleached hair swirls as he steers a 14-foot skiff toward the Shackleford Banks.

But he’s not truly alone.

The eyes of his father, who is on Harkers Island looking through binoculars, are on him the entire time. Also with him are years of know-how from growing up in a family of commercial fishermen and boat builders. That boy named Stacy Davis grew into a man perfectly equipped for an important role as facilities manager at the Institute for Marine Sciences in Morehead City.

At the institute, he’s the steadying force that keeps mechanical systems shipshape and boats at the ready, even captaining the 48-foot research vessel Capricorn with Carolina students aboard and advising them on what to expect their first time on the Atlantic Ocean. The scientists, staff and students with whom Davis works know he is someone special.

When Davis, in his rapid-fire brogue, pronounces names of coastal towns — Salter Path, Ocracoke, Harkers Island, Promise Land — familiar to North Carolinians, he sounds rooted in sand, wind and water. His speech echoes the voices of his ancestors, “Ca’e-bankers,” an abbreviation for Cape Bankers. They migrated to the Cape Lookout area from the Outer Banks in the early 1900s. “They spread out, so you will hear it up and down the coastline,” he says. “It’s a different sounding brogue, but you’ll hear it up to Assateague and down south.”

Those Outer Banks origins destined him for work on the ocean. 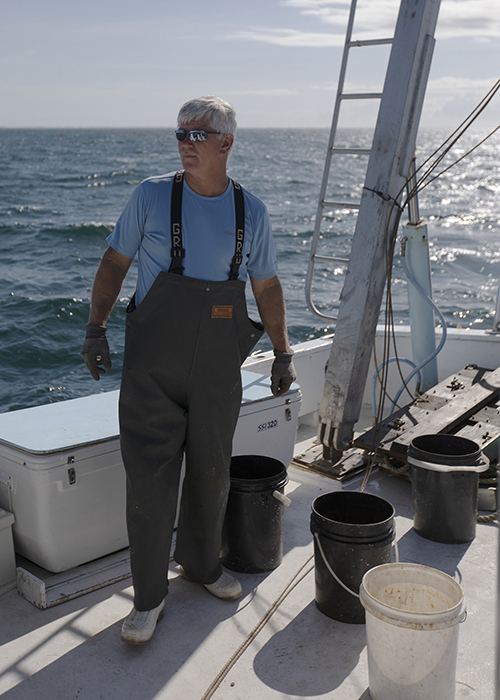 Stacy Davis stands on the deck of the research vessel Capricorn while on a shark-tagging trip. (Megan May/UNC Research)

Davis spent nine years with the N.C. Division of Marine Fisheries as a boat and vehicle mechanic. In 1996, he joined the institute, part of the College of Arts & Sciences’ earth, marine and environmental sciences department, as a mechanic and back-up research vessel captain. In 2011, he became facilities manager.

It’s a title that encompasses what he and his crew do from their shop on the Bogue Sound. Before he’ll talk about his job, Davis says, “Let me tell you something” in a way that means pay attention. He quickly names his crew — Phil Herbst, Jim Fuller, J Ipock on the boats, Wayne Fluellen in the shop and custodians Nina Morton and Jimmy Smith.

“I can ask them to do most anything, and they will figure out a way to make it happen,” Davis says. A refrigerator goes out in a dormitory? An air conditioner croaks that same day? They coordinate to get it all fixed by sundown.

The crew maintains buildings, systems for heating, air conditioning, electrical and emergencies, plus one supplying saltwater to labs and the creatures in them. They keep small boats, the Capricorn and trucks operating.

The crew’s important, but it’s Davis whom the over 100 Massey nominations recognized with their description of his:

“It is well known around IMS that if you can describe it, Stacy can build it. If you can break it, Stacy can fix it,” a colleague wrote. Davis counts among his more challenging projects building a steel structure to support chains extending to weights at the ocean’s bottom that stabilize a weather buoy. He not only fabricates equipment from plastic, wood and metal but also trains others on fabrication methods. He re-set a boiler smokestack dislodged by Hurricane Florence. As that storm blew, he drove to IMS to fix an emergency power generator, ensuring that critical equipment remained on.

“We are what we are, a top-rated, globally recognized marine facility and resource, in very large part because of what Stacy has done to ensure our high level of productivity and quality of research,” wrote one nominator.

All of this makes Davis a hero to IMS faculty, staff and students. “Not all heroes wear capes,” another nomination reads. “At Carolina’s marine lab they come with a wrench, an ever-present Cheshire grin and the most delightful Down East brogue you’ve ever heard.”

Davis returns the praise. “It’s a joy to work with faculty and students and to have a knowledgeable and supportive staff that treat you like family,” he said. “I’m honored to be a part of something so great and that so many folks feel confident in me.”

His own family brings him even greater joy, especially when they’re on his 26-foot sports fisher, anchored somewhere off Shackleford Banks and Cape Lookout. “That’s where I like to float our boat,” he said. “My favorite days are when we’re on our boat spending the day on the shore. All the kids are swimming, and we might camp if the weather is decent.”

Family’s always been important, dating back to his days growing up on Harkers Island. His father was a ferry boat captain and commercial fisherman; his mother ran their home and kept Davis and his two brothers and two sisters busy.

“Basically, we were born on a boat,” he said. “We truly lived in paradise. From the front window of the house, you could see across the water to Cape Lookout lighthouse.”

With that upbringing, he learned to build, rig and operate boats of all sizes and to read weather and water. Most importantly, he says, he learned to respect everyone.

Decades later, he’s enjoying the best of both at work and at home. “I consider this place a piece of heaven on Earth.”

This story is part of The Well’s coverage of the C. Knox Massey Distinguished Service Awards, which recognize “unusual, meritorious or superior contributions” by University employees.Look for new recipient profiles to come orfind ones you may have missed.