Vy Pham picks up a foot-long metal box and holds it to her ear.

“I’m not sure if anything is in it,” the UNC-Chapel Hill senior says warily.

She holds it out in front of her, her headlamp illuminating its small trap door. As she pushes it in, she hears a squeak and sees two small eyes staring back at her.

“We got one!” she shouts triumphantly.

Rada Petric, a UNC-Chapel Hill biologist, smiles and kneels next to Pham. She shows her how to remove the small brown house mouse from the trap and hold it gently while they record its body measurements and tag its ear for tracking. The latter allows researchers to follow an animal throughout its life course, providing invaluable data. When they finish, they release the mouse, which scurries back into the woods.

This is just one of 200 traps spread across five miles of creek systems and wetlands in Julian. The final weekend of each month, Petric and a team of local researchers gather just before dawn to survey the area’s small mammals like mice, voles, shrews, rats and bats. When possible, they also collect data on reptiles, bees and butterflies and salamanders.

The wetland here is about to undergo mitigation — and researchers want to know how that will affect the ecosystem. Oftentimes, when an ecosystem is degraded, damaged or destroyed, landowners will work to restore it by creating conditions needed for recovery. These include removing invasive species, reintroducing lost species or wildlife, altering landforms, planting vegetation and changing the hydrology. The goal is to return the ecosystem to the trajectory it was on before human intervention.

Farmland and pasture development has severely degraded these wetlands in Julian, and cattle have decimated the creek systems through nutrient consumption, defecation, and urination. As water quality degrades, so does the rest of the ecosystem, creating a ripple effect that impacts not only small mammals but reptiles, amphibians, freshwater mollusks and insects.

Some of the efforts to rehabilitate this ecosystem include fencing off the creek and wetlands to prevent cattle from accessing them and lifting the creek, which currently has 6- to 8-foot-high banks. This involves burying the old creek and creating a new path for it to flow through with excavators. Rocks are then added to the creek to create small waterfalls that oxidize the water and help local animals survive.

The eight-year project is a collaboration among Petric, professor and director of the UNC Highlands Field Site; Olivia Munzer, Western Piedmont habitat conservation coordinator for the North Carolina Wildlife Resources Commission; and Lindsey Zarecky, vice president of conservation and research at the Greensboro Science Center.

“This is a big, collaborative project with incredible women from various agencies,” Petric shares. “Being part of a project that will make a positive impact on the region and all its inhabitants is a fantastic feeling.” 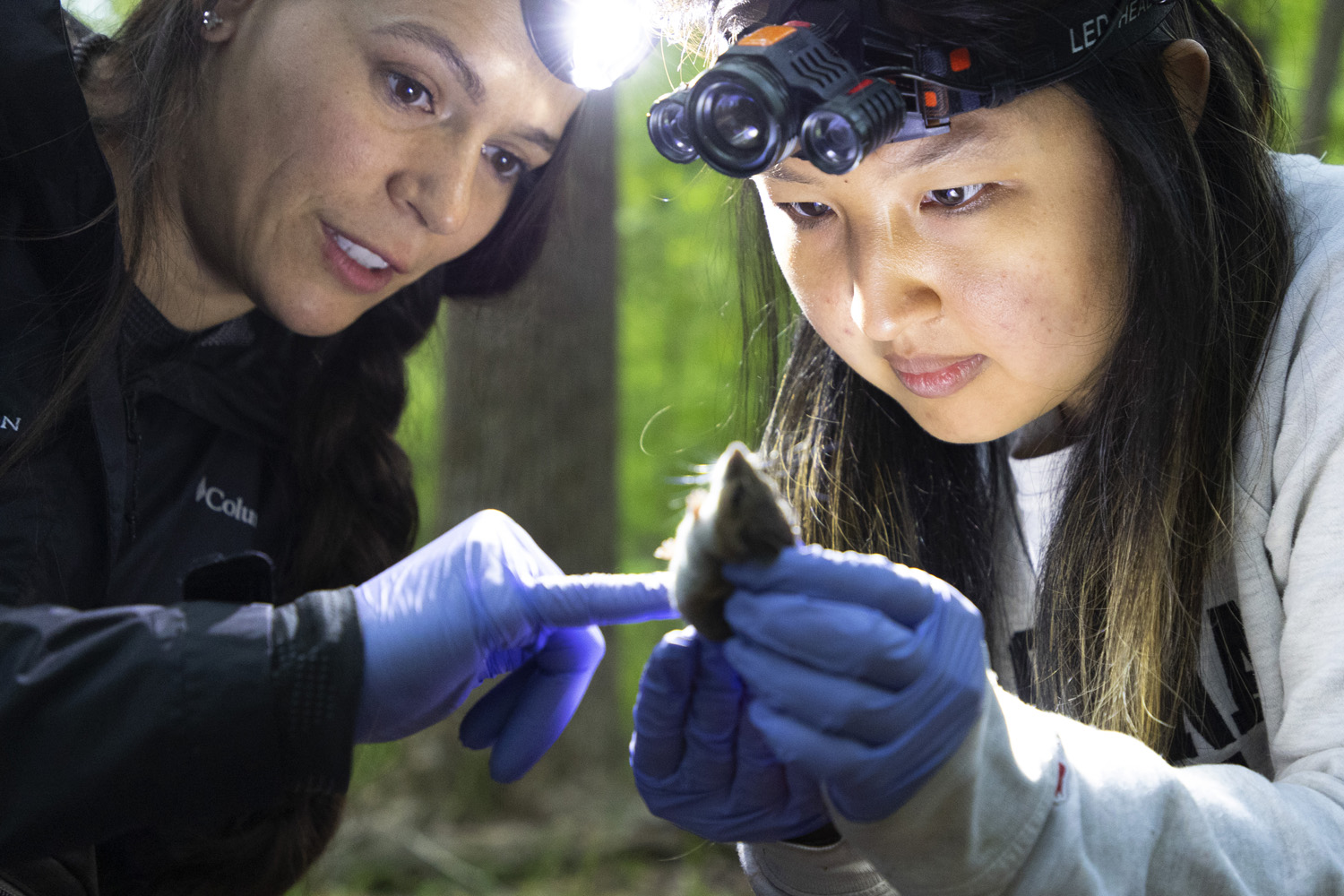 Rada Petric shows Vy Pham how to identify the gender of a mouse they caught for the restoration project. “This is such a fantastic opportunity to provide essential field experience to young researchers,” Petric says. “It helps them become more confident in their own abilities to complete complex tasks and think more critically.” 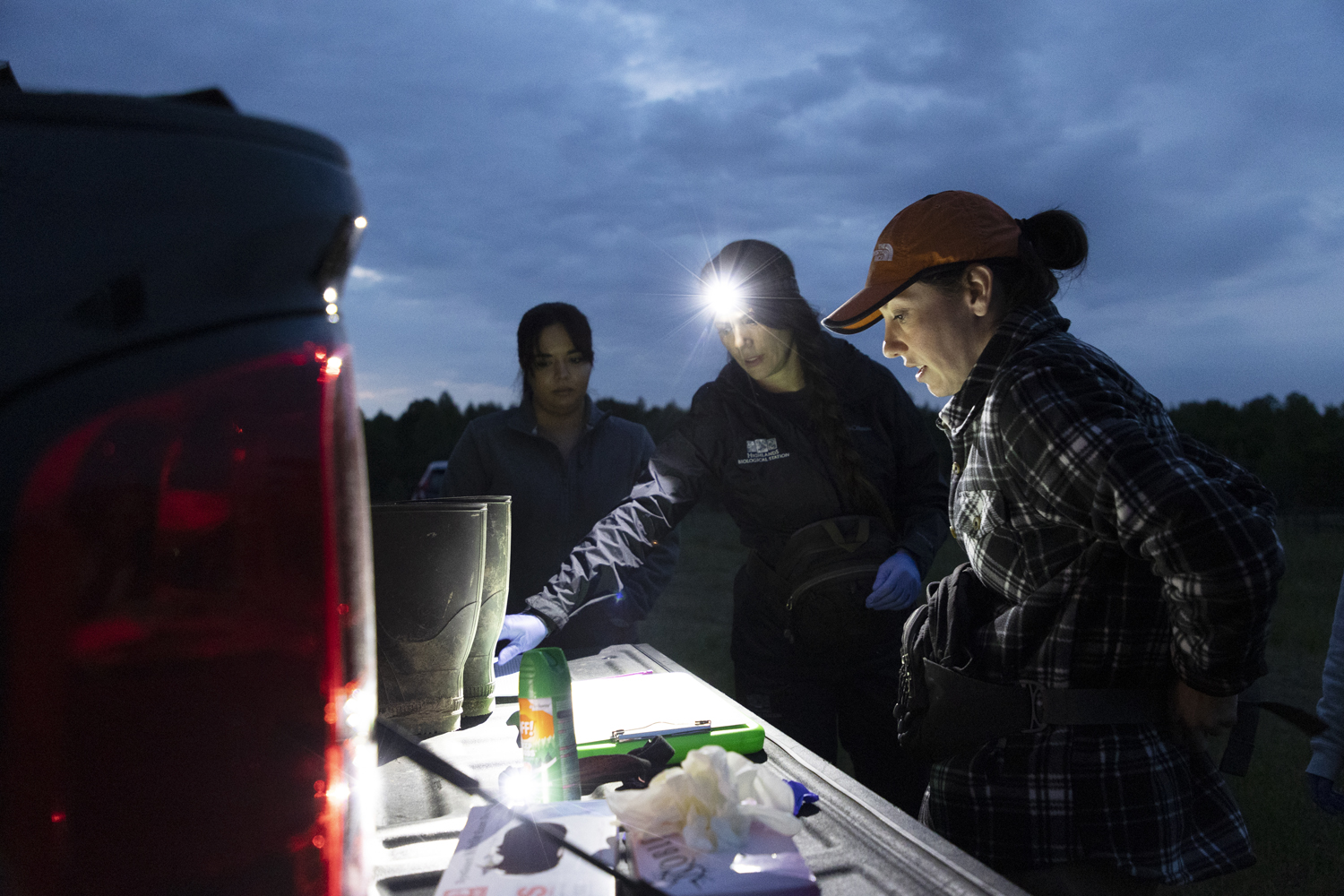 The researchers meet at the field site at 6 a.m. after setting traps the night before. They dress head-to-toe in waterproof clothing and gather supplies like gloves, tweezers, Ziploc baggies and data collection sheets for the work ahead. 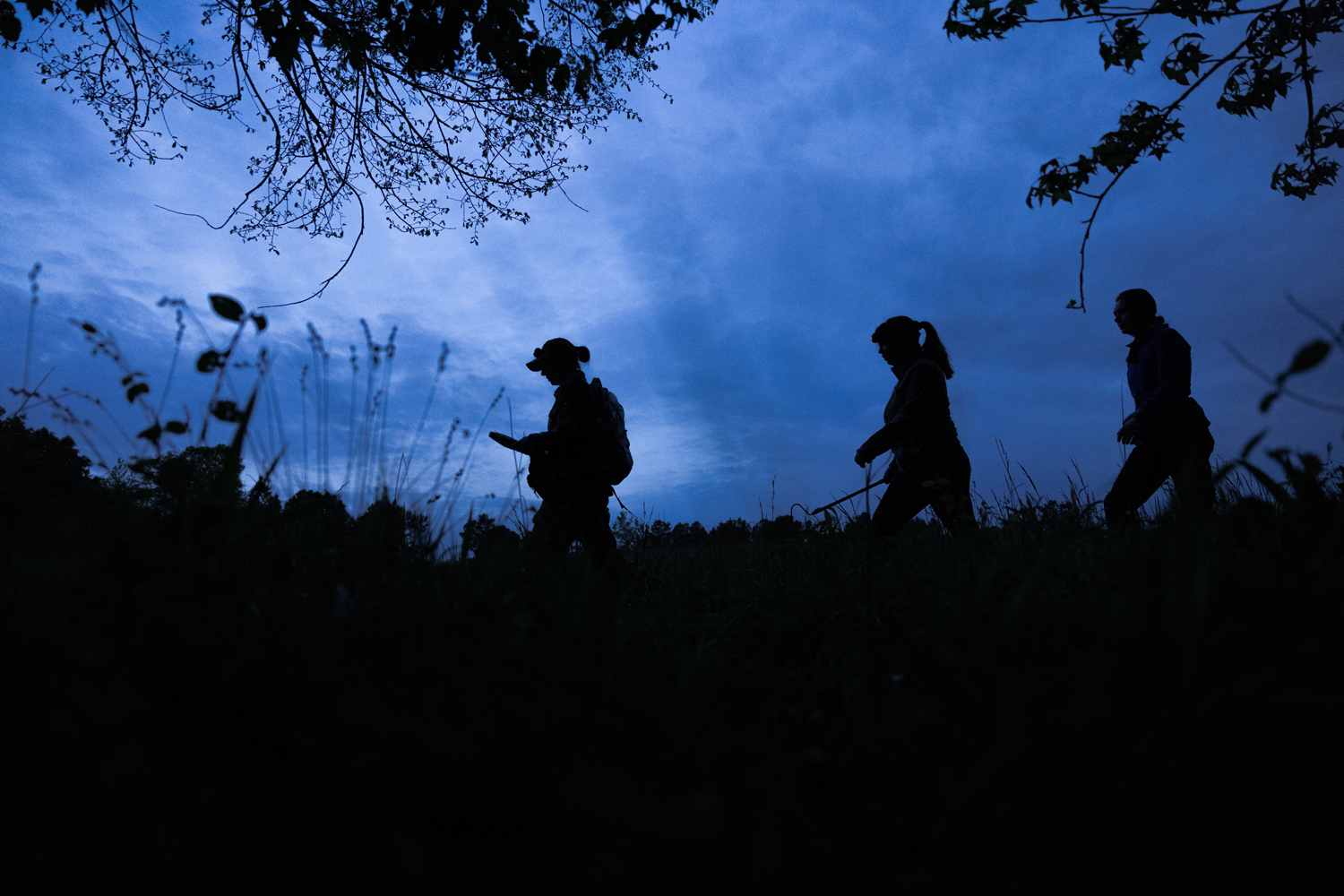 One team heads into the woods before sunrise to start checking traps. “We walk up to 10 miles each day on uneven terrain to setup and check out equipment,” Petric says. “Summer days are often hot and humid, and we sometimes get covered in ticks or caught in heavy rains.” 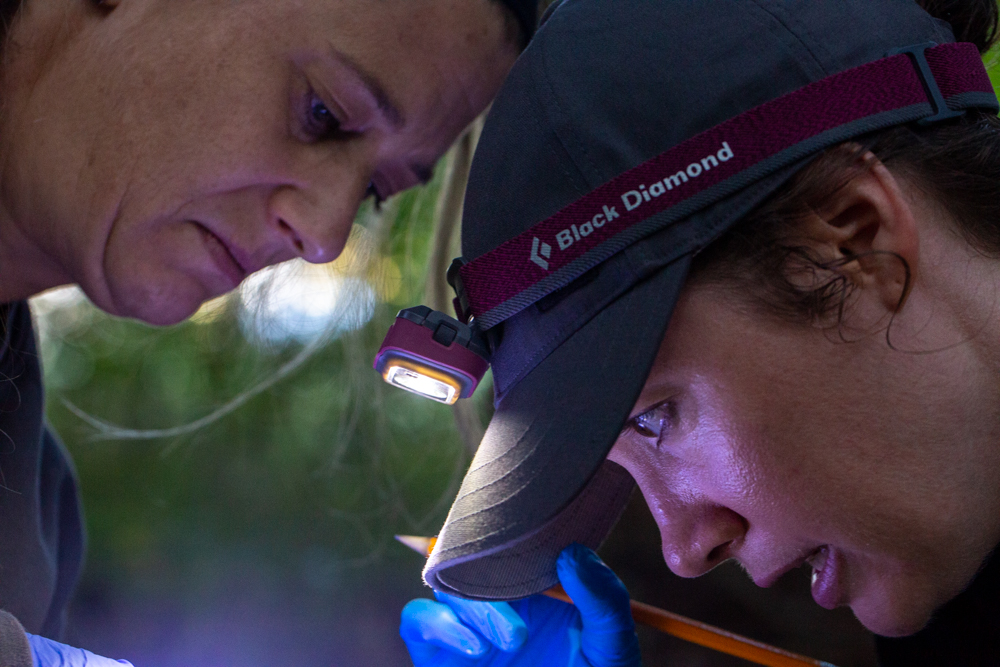 Olivia Munzer and Sara Bennett observe a mouse they caught in one of the traps. 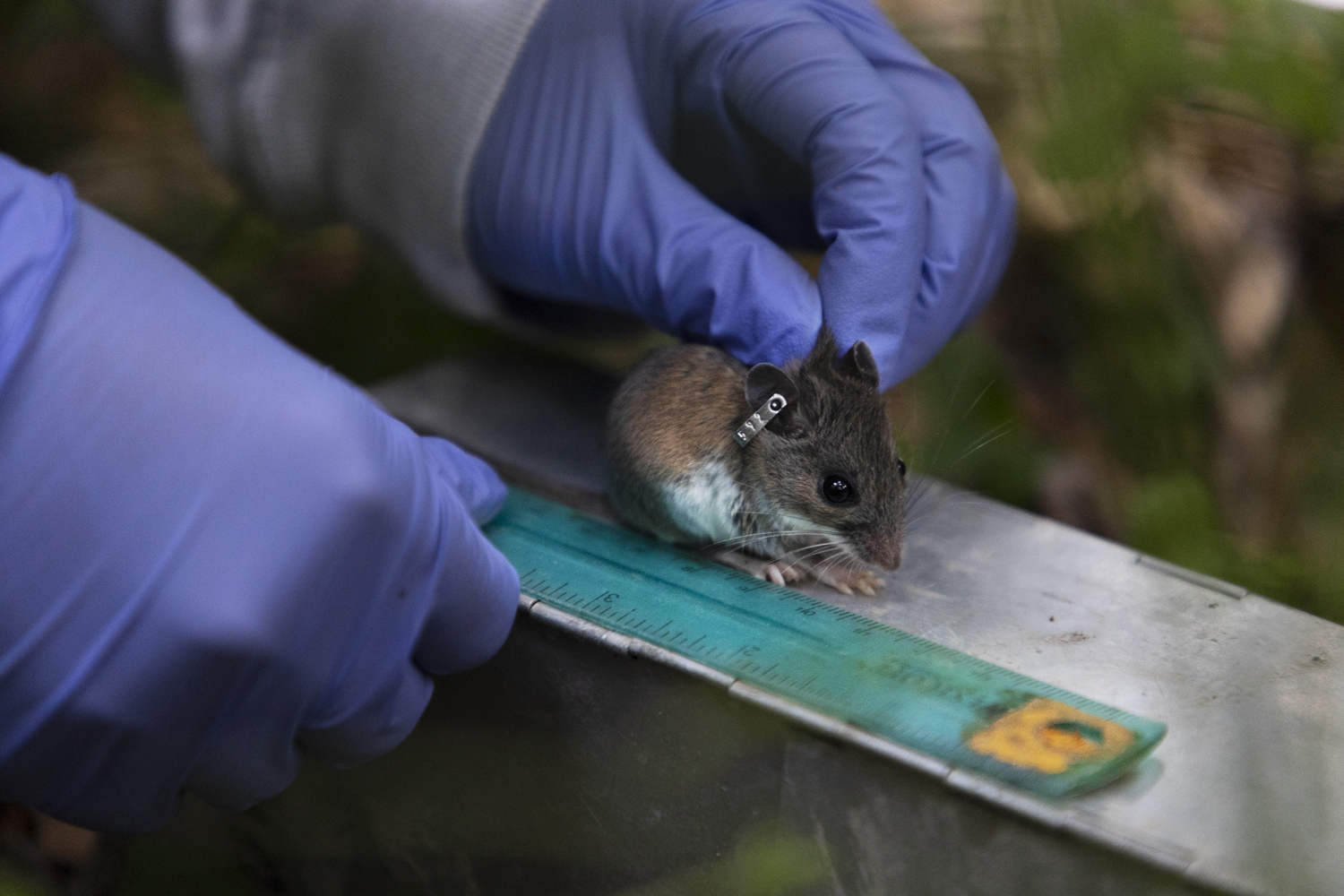 When a small mammal is captured, the researchers measure it, weigh it, record its sex and if it’s pregnant, and tag it with a federal ID that goes into an online database so that other researchers can obtain data on the animal. If they catch the same one again in the future, they can compare their new data set with the original, monitoring changes over time. 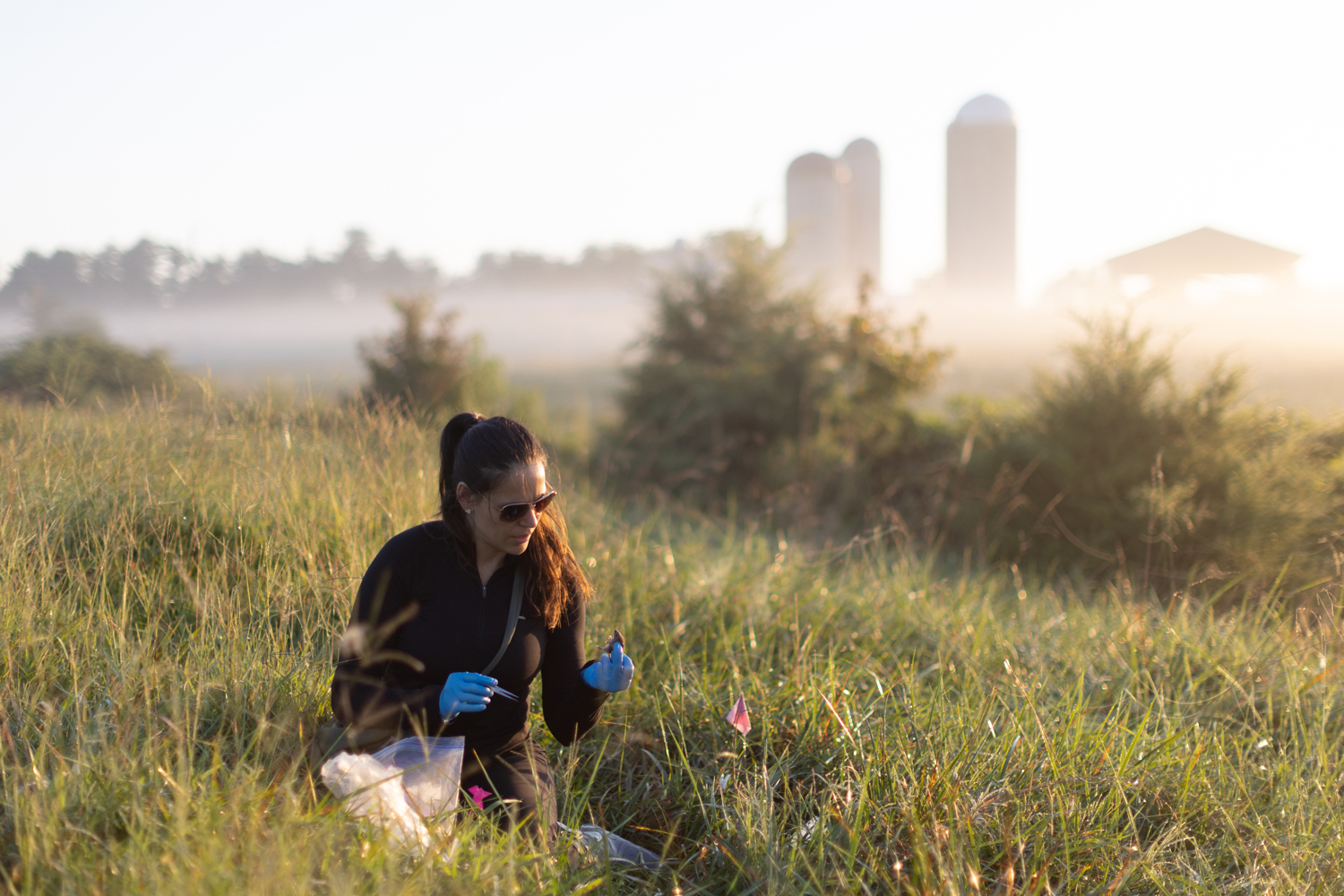 Petric takes a mouse’s measurements after releasing it from one of the traps.