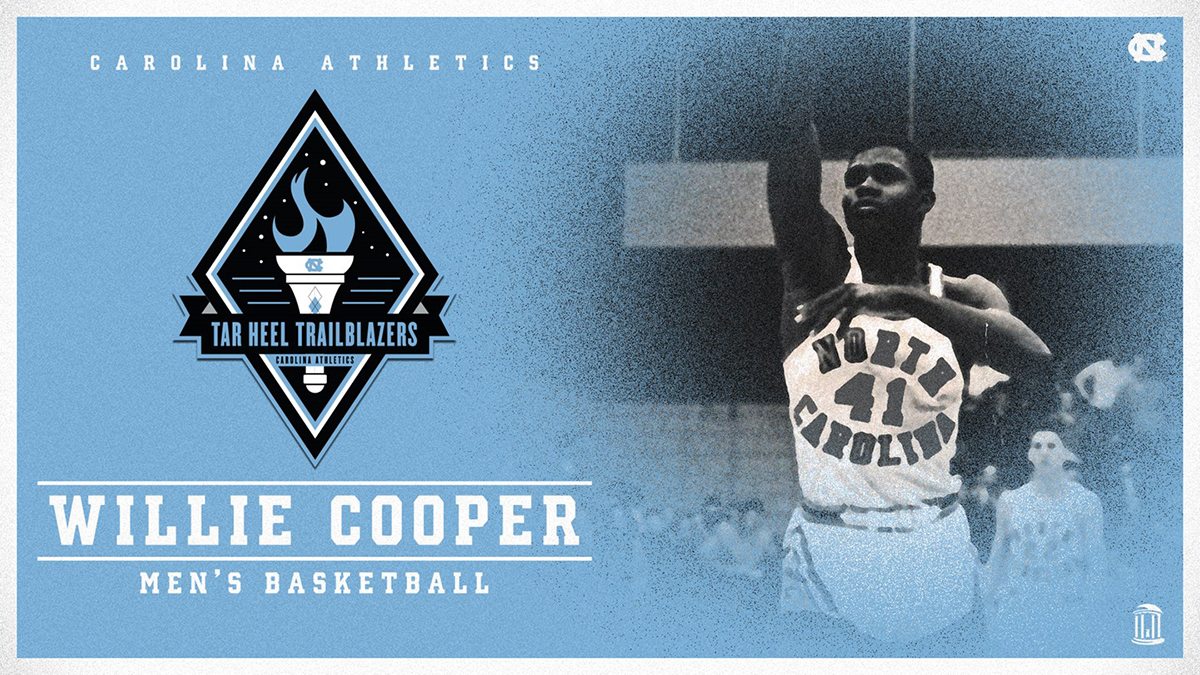 Even now, nearly 56 years since he last donned a North Carolina uniform, Willie Cooper still thinks about what could have been.

He wonders what might have happened had he – a member of Carolina’s 1964-65 freshman team and the first African American to play basketball for an ACC Carolinas school – made varsity as a sophomore, two years before Charlie Scott. He also ponders if he made the right decision to quit the sport when it seemed as if he had a chance to find out.

“I have grappled with this all of my life,” Cooper said. “When you want to be a basketball player as bad as I did and then you’re not able to do it, there’s kind of a void there.”

That, however, doesn’t mean it hasn’t gotten better.

Over time, Cooper said he’s realized how his experience on the Tar Heel freshman team broke a barrier and helped open doors for others. But for the most part, he’s never been recognized for that. That changed on Saturday, when he was honored as this year’s Tar Heel Trailblazer at halftime of the men’s basketball game against Virginia.

“It’s kind of neat that it finally has happened,” said Cooper of his honor.

It just as easily could not have, though.

Cooper would be the first to tell you there could have been no story at all; no account of how he, the son of poor sharecroppers in Elm City, North Carolina, helped pave the way for the generations of African American athletes and students who have followed in his footsteps.

That there is a story is a testament to Cooper and his perseverance. But even more so, it’s the direct result of the impact one family had on him.

Cooper was 8 when his biological father died, leaving Cooper’s mother to take care of him and his 10-year-old sister. It became clear pretty quickly, however, that she wouldn’t be able to due to a nervous system disorder, Cooper said.

Soon after his father died, the family ended up on welfare and moved to nearby Wilson. There, Cooper said, he was on his “own a lot, running the streets and getting into all kinds of trouble.” Not knowing any better, he developed a habit of stealing. And in the rare instances, he went to school, he got into fights with his classmates, many of whom teased him about his wardrobe.

All of that came to the attention of Human Services, which set about finding a foster home for Cooper. Eventually, it found one with Elm City’s Martha and Kester Mitchell.

The Mitchells had raised 10 children of their own, but with all but one of them gone, Cooper said they needed a strong boy who could help on their farm. They found that in Cooper, then 10. And he found a family eager to make him one of their own.

All of his new siblings embraced him, Cooper said, with many of them pulling together to buy him a bicycle for his first birthday with the family. A few even invited him up to their homes in Brooklyn, New York, one summer so they could show him New York City.

The sibling who made the biggest impression on him, though, was Amanda Cameron, a teacher at Elm City’s Frederick Douglass High School.

Cameron took Cooper under her wing and encouraged him to read books in an attempt to shake his bad habits. Initially, she made him read one each week, and forbid him from watching TV if he didn’t. That, Cooper said, motivated him. And the more he read, the more committed he became to his education.

Then, in sixth grade, he started taking an interest in basketball.

A 6-foot-2 defensive specialist, Cooper went on to star for the Douglass Braves, then coached by Harvey Reid, still the winningest coach in North Carolina high school prep history. Douglass won two state championships with Cooper. It also had a 72-game winning streak.

As Cooper enjoyed such success, Dean Smith, whose father insisted on including black players on his Kansas high school teams, was in the process of trying to integrate the ACC.

That had been among Smith’s top priorities since becoming Carolina’s head coach in 1961. But two-plus years into his tenure, he had yet to recruit a black player who he felt could contribute on the court and excel academically at UNC-Chapel Hill. Ultimately, his search led him to Douglass in early 1964, when Cooper said Smith called Reid, asking if he had the sort of player he was looking for.

That was enough for Smith.

Soon after that call, he sent Ken Friedman, then a Carolina graduate student, and Reggie Fountain, then a UNC-Chapel Hill law student, to Douglass to scout Cooper. Based on what he’s heard, Cooper said Smith instructed Friedman and Fountain to give Cooper a scholarship if he was as good as future All-American Bobby Lewis, then the leading scorer on the Tar Heels’ freshman team.

“When they came back, they said, ‘He’s not a Bobby Lewis,'” Cooper recalled being told. “And the thing almost died.”

As excited as he was about that opportunity, Cooper said his family couldn’t afford the tuition. But any concerns he had were eased when he qualified for a scholarship for in-state students whose parents were deceased U.S. military veterans; his father was a World War I veteran.

“Somehow,” Cooper said, “things worked out for me.”

Upon arriving in Chapel Hill in the summer of 1964, Cooper was welcomed by the Carolina Family. Billy Cunningham, Doug Moe, Yogi Poteet and Donnie Walsh, among others, played pickup with Cooper and assisted him in many other ways in preparation for tryouts. Their efforts, he said, showed how committed they were to getting a black player on the team.

Not everyone was so supportive. Back in Elm City, the local chapter of the Ku Klux Klan burned a cross on the Mitchells’ front yard that same summer, a fact that Cooper said he was unaware of until Cameron told him about 10 years later.

Going through tryouts that fall, Cooper said he thought he played well, especially considering he was practicing at his unnatural position of point guard. On the last day, he held his own against eventual All-American Larry Miller, which all but sealed Cooper’s spot on the team.

For most of the Tar Heels’ 87-56 rout of Clemson, Cooper recalls sitting near the end of the bench. But with about five minutes left, he took the floor, becoming the first African American to play for an ACC Carolinas school. Cooper still has a copy of the Daily Tar Heel article from that game, which describes one of his favorite memories from his career:

“A historic event produced the most noise from the stands with 2:07 left in the game,” the article reads. “Willie Cooper, of Elm City, scored on his first shot, a high arching jump shot from the side. He is the first Negro to score two points for the Blue and White.”

Cooper received similar ovations almost everywhere he played that season. Yet he also endured many of the indignities Southern black athletes faced in the 1960s.

On a trip to Virginia, a restaurant refused to serve him. The coaches reacted by taking the team to eat elsewhere. Cooper said he also wasn’t allowed to travel with the team to a game in South Carolina because the coaches feared it would be too dangerous.

Even amid all that, Cooper managed to improve, to the point that Coach Ken Rosemond turned to him in a late-season game to guard one Virginia player who had given the Tar Heels fits all game.

“That was nice to know that I had worked and could make a contribution,” said Cooper, who finished the season averaging about four points per game.

By the end of the season, Cooper said he thought he had a chance of making the varsity team as a sophomore, something he felt even more confident about after a summer of training in Elm City. But in the fall of 1965, he faced yet another challenge.

Upon beginning classes in his major of business administration, such as accounting and statistics, he started struggling academically. He began the semester by nearly failing a few tests. And suddenly, he found himself wondering if basketball was in his future.

“Given the indoctrination I had with all those brothers and sisters with degrees and all the effort the one sister had made in getting me up to snuff on my education,” he said, “I was just prone to go to college and finish college and make something out of myself.”

Around that same time, Cooper said he’d become unsure about what sort of role he’d have on the varsity team if he made it. He also encountered an issue with his roommates.

Cooper said they made it clear they didn’t want to room with him because he was black. And after much deliberation, he decided to move out. Shortly after that, he met with Smith and told him he was stepping away from basketball to focus on his grades.

Before informing Smith of his decision, Cooper said he told Friedman, the man who had done as much as anyone to help him make the varsity team.

“He said, ‘You’ve accomplished what you’ve needed to accomplish,”‘ Cooper recalled. “And at that point, I dropped out. I had had some fairly good practices as I was going out for the varsity team. But a young 18-year-old can only take so much.”

Cooper, meanwhile, graduated from UNC-Chapel Hill in the spring of 1968 with a degree in business administration. He then went on to serve in the U.S. Army for three years, including one tour of duty in Vietnam, before accepting a job with IBM.

As an operations manager for IBM in Mobile, Alabama, Cooper was again discriminated against.

“It was the same as being the first black person on the Carolina team; I was the only black manager in the whole facility,” he said. “It seems like ever since high school I’ve been in situations where I was open for discrimination and had to endure that kind of thing.”

Cooper said he spent about a year in that position before becoming an equal-opportunity officer for IBM. Among his many duties in that role, he helped ensure the company’s Atlanta regional office hired and promoted minorities. He ultimately retired from the company in 1993.

Since then, Cooper and his wife, Helen, have lived in Chattanooga, Tennessee, where he started his own landscape-lawn service and has often spent time thinking of what could have been.

Those thoughts might be even more frequent if not for his son Brent and daughter Tonya. Brent played on Carolina’s 1991-92 junior varsity team. And in 1994, Tonya, then a sophomore scholarship athlete on the women’s basketball team, helped the Tar Heels win the national title.

“When I got to see her playing in the Dean Dome, that was kind of my dream,” said Cooper of his daughter. “She’s been my rock when I feel discouraged. She convinces me that just because I didn’t make the team, that’s not the end of the world.”

It’s taken nearly 56 years for Cooper to come to grips with that – and in some ways, he still is. But his story is about far more than what he did on the court.

“I went through some things that were not life and death – I didn’t give my life for it,” Cooper said. “But I like to think it made me stronger. Because after Carolina, I felt like I could do anything.”