The summer of 2020 marked the 100th anniversary of the ratification of the 19th Amendment, which prohibits any state from denying the right to vote to citizens of the United States on the basis of sex.

To celebrate the groundbreaking advancement, University Libraries began developing an exhibit to honor women’s history at Carolina, and associate professor Katherine Turk charged her “Women in the History of UNC-Chapel Hill” students with developing a virtual walking tour to accompany the library’s exhibit. While the library exhibit scheduled to open in spring 2020 was ultimately canceled because of the COVID-19 pandemic, the walking tour became a pandemic-proof way for people to learn about women’s history at the nation’s first public university.

The tour explores women’s experiences on campus as they were shaped by race, class, age and sexuality. It can be taken in person or through navigating a digital map. Included in the map are the archival materials the students used to mark each place on the tour.

“We partnered with the library staff — especially Sarah Carrier, Rachel Reynolds, and graduate students Lara Lookabaugh and Aramis Sanchez, Jr. — to give students the opportunity to comb through a curated set of primary sources and construct a narrative based on the sources that they chose to highlight,” said Turk.

The students listened to interviews from the Southern Oral History Program and sifted through preserved University publications and documents from former students to develop 10 themes for the exhibit. Those themes mirrored the 10 points for a guided campus walking tour, including the Food Service Workers’ Strike, the Female Liberation Movement and the University Women’s Club. The history department’s Digital History Lab then helped digitize those materials and build the online map and tour for the class.

“I didn’t know a lot about women’s history at Carolina, so that definitely drew me to the class, on top of the really unique format that the class offered,” said Emily Orland, a junior journalism and history major who took the class in the spring of 2020. “There’s not many classes where you’re going to be making a museum exhibit and doing something so tangible and shareable with your research.” 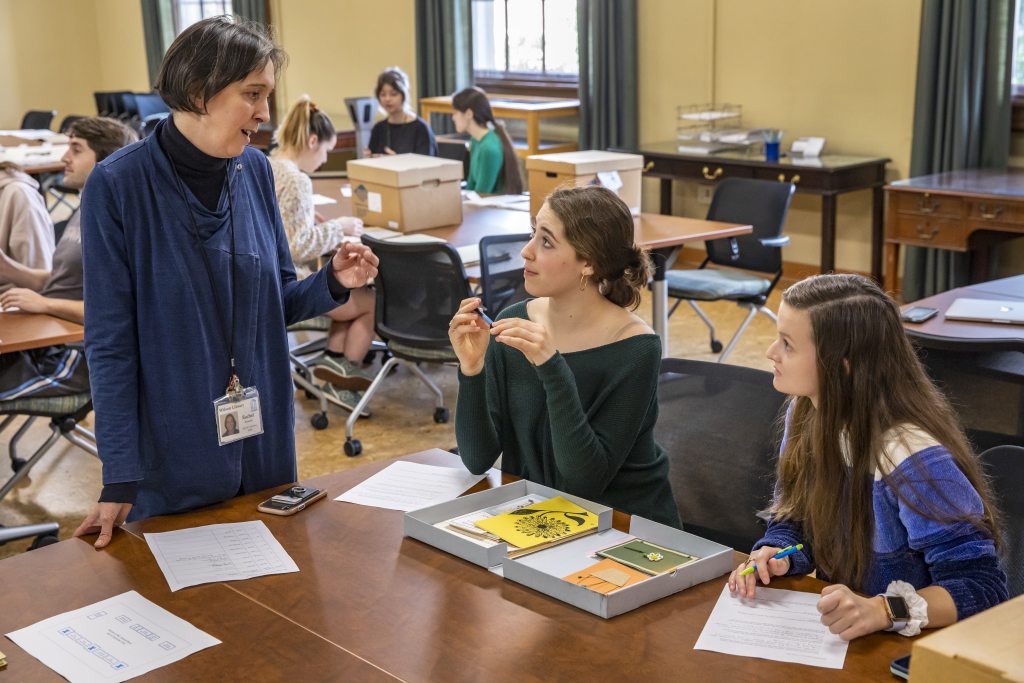 Among the materials the students studied were a list of demands that a Carolina feminist group, Female Liberation #27, delivered to the administration at South Building in 1970 in an effort to improve the status and treatment of women affiliated with the University, and a letter from 1923 signed by Carolina alumna formally requesting the construction of a building for women’s housing on campus.

“My group focused on campus spaces relevant to women and the social lives of women at Carolina. We chose places on the tour that corresponded to different items from the archive that we thought were relevant to the history of women’s spaces and social lives at Carolina and wrote captions for the materials and descriptions of the locations,” said Marlee Walls, a senior studying computer science and math.

The students also learned through their research that the path from women being admitted to Carolina in 1897 to the present day isn’t a clear-cut timeline. It’s been a journey.

“It’s been a long, contested and uneven process to include women of all different backgrounds at Carolina. It might seem kind of paradoxical that women now outnumber men considering the challenges that remain,” said Turk. “The students wanted to capture the sense of progress and pride and forward momentum, but they also wanted to highlight the range of experiences women have on this campus have had and continued to have.”

She hopes that future students add to the existing project to continue sharing the experiences of women at Carolina.

“We hope that the walking tour can live on in perpetuity and that people continue to experience this campus through the eyes of women who walked these corridors and these quads in different eras,” said Turk. “This is just a starting point because the history of women at Carolina is an incredibly rich and complicated story, and there’s plenty more work to do.”

Turk believes it’s powerful for students to imagine themselves in the past while sitting on campus and looking through the papers of people who could have sat in that exact same chair decades ago.

“I think it’s pretty cool that the first survey I ever got of Carolina’s history was through the lens of women’s history,” said Walls. “It sounds cheesy, but all the women who came before me made it possible for me to study and participate in whatever I want at the University.”