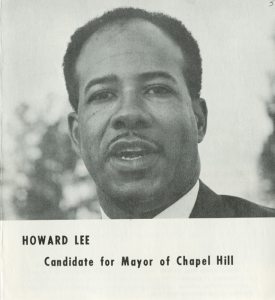 Growing up in a segregated Georgia in the 1940s, Howard Lee didn’t know where his life would lead, but eventually, it led him to earn a master’s degree from the UNC School of Social Work in 1966.

“The students in the School of Social Work embraced us, and we just simply didn’t feel any different from any other student,” Lee said. “That started me on a road of feeling recertified as a person.”

But outside the classroom, Lee and his family continued to feel the racial tensions they experienced in Georgia. It was this tension that pushed him to run for mayor of the town in 1969.

“I decided to run for mayor not so much to win — because I didn’t think a black person would be elected mayor in Chapel Hill — but to make a point to push certain issues that needed to be dealt with,” Lee said.

On this episode of Well Said, Lee details living life in the segregated South and his path to the mayor’s office.

Listen to the episode on SoundCloud or wherever you listen to podcasts.

Read a transcript of this episode.