Darpino is a retired Army general officer and military lawyer who served as the 39th The Judge Advocate General (TJAG), U.S. Army. Join UNC School of Law for the annual campus celebration of Constitution Day. 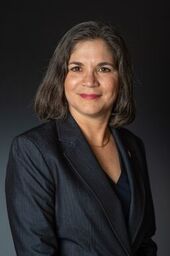 Lieutenant General Flora D. Darpino was appointed as TJAG on September 4, 2013, and served until July 14, 2017, where she was responsible for the Army Judge Advocate General’s Corps, an organization with approximately 10,000 personnel. She was also the senior military legal advisor to both the Secretary of the Army and the Chief of Staff of the Army. She is the first woman appointed TJAG since the establishment of the Army in 1775. Prior to being selected as the 39th TJAG, General Darpino served as the Commander, The Judge Advocate General’s Legal Center and School, Charlottesville, VA, Commander, The United States Army Legal Services Agency, Fort Belvoir, VA and, Chief Judge, United States Army Court of Criminal Appeals.

Directly commissioned into the Army JAG Corps in January, 1987, she served in a variety of developmental assignments both in Germany and the Washington, DC area, including litigating in both military criminal courts and Federal civil courts. Upon completing her L.L.M, Darpino was sent to be the Chief, Administrative Law, 101st Airborne Division (Air Assault), Fort Campbell, Kentucky. Following a tour at the Office of The Judge Advocate General (OTJAG) in the Washington, D.C. area as the Assistant Executive Officer and Chief, Judge Advocate Recruiting Office, she served as the Staff Judge Advocate, 4th Infantry Division (Mechanized), Fort Hood, Texas, deploying with her unit to Kuwait and Iraq in 2003. Subsequently, she served as the Deputy Staff Judge Advocate, III Corps at Fort Hood, Chief, Criminal Law Division, OTJAG, and Staff Judge Advocate, V Corps, in Heidelberg, Germany. Darpino then deployed to Iraq to serve as the Staff Judge Advocate, United States Forces – Iraq, in Baghdad, Iraq, where she was the senior military attorney in the country working with both the military and State Department.Darpino graduated from Gettysburg College (B.A. with Honors, 1983) and Rutgers University (J.D. 1986). She has an L.L.M. in Military Law from The Judge Advocate General’s School, U.S. Army, and served as an Army War College Fellow at the Department of Justice. She is a member of the Pennsylvania and New Jersey Bars. Her military awards and decorations include the Distinguished Service Medal, Defense Superior Service Medal, the Bronze Star Medal, the Legion of Merit, and the Meritorious Service Medal. She is a graduate of Air Assault School.

For the past several years, UNC School of Law has served as the host of the campus-wide UNC-Chapel Hill Constitution Day celebration. Each year on September 17, pursuant to a 2004 federal statute, U.S. schools and colleges take time to celebrate and commemorate the day on which the Constitution of the United States was signed. Constitution Day presents an opportunity to reflect upon the deeper meanings of the Constitution and the hopes it embodies for the future of the country and the world.

The event is open to the public. Light refreshments will be served.