In Honor of Black History, The Friday Center presents Voices for Justice

MIKE WILEY PRODUCTIONS’ DAR HE: THE LYNCHING OF EMMETT TILL

In honor of Black History, the Friday Center for Continuing Education proudly presents a live, online theatrical performance presented by acclaimed actor and playwright Mike Wiley. Crafted from the public record, his one-man, multiple character performance of Dar He offers a transfixing dramatization of the historic interviews and events surrounding the lynching and murder of 14-year-old Emmett Till.

In 1955, a 14-year-old black Chicago youth travelled to the Mississippi Delta with country kinfolk and Southern cooking on his mind. He walked off the train and into a world he could never understand. It was a world of thick color lines, of hard-held class systems and unspeakable taboos. Young Emmett crossed that line and stepped into his gruesome fate by whistling at a white woman. This riveting play chronicles the murder, trial and unbelievable confession of the men accused of Till’s lynching. His death was a spark that ignited the Civil Rights Movement in America.

Portraying an entire cast of black, white, male and female characters, Mike Wiley’s solo performance reminds us that we are all one humanity. It is a living monument and tribute to the change-making unsung heroes from the African-American experience. Dar He offers a powerful lesson of truth and the triumph of the human spirit. 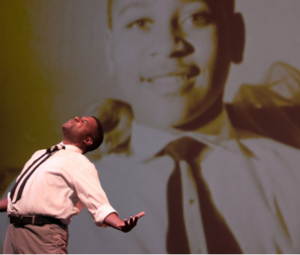 Dar He presents live from the stage of the Clayton Center, in Clayton, N.C., and broadcasts in real time via Zoom. Registered participants will receive the Zoom link a few days in advance of the event. Following the performance, participants will have opportunity for a live interactive Q&A session with Mike Wiley.

Mike Wiley’s documentary theatre productions are dramatically rendered stories based on historical fact. The performances intend to shine light and open dialogue by sharing stories of individuals and events of human and civil rights struggle, strength, hope, failure and accomplishment. These stories are part of the American historical narrative. Occasional use of language or terminology accurate to an event’s period or setting may be viewed by some as offensive or inappropriate– but by avoiding such language, the historical truth of the portrayal becomes less authentic. Thank you for your understanding.

Mike Wiley is a North Carolina-based actor & playwright whose compelling works of documentary theatre yield rich and powerful journeys to milestones and turning points of the African American experience. Each work in the company’s productions is designed to inspire audiences to examine America’s racial history, teach the lessons of the past and encourage the application of these truths to the present. With a remarkable ability to inspire dialog, Wiley’s overriding goal is expanding cultural awareness for audiences of all ages through dynamic portrayals based on pivotal moments in African-American history. Wiley has introduced countless students and communities to the legacies of Henry “Box” Brown, Jackie Robinson and more. His recent works include The Fire of Freedom – the story of Abraham Galloway, adapted for the stage by Howard Craft and based on the book by Dr. David Cecelski; a one-man play based on Dr. Timothy B. Tyson’s memoir Blood Done Sign My Name; and Downrange: Voices on the Homefront (chronicling the challenges of military families, post 9/11). In 2018, Wiley completed Leaving Eden, a Playmakers Reparatory Company commissioned work that explores the cycles of history, human behavior, race and economic disparity through inhabitants of a small North Carolina town.

Wiley has a Masters of Fine Arts from the University of North Carolina at Chapel Hill. He is a 2017 recipient of UNC’s Distinguished Alumnus Award, which recognizes alumni who have made outstanding contributions to humanity. In 2010 and 2014, Wiley served as the Lehman Brady Visiting Joint Chair Professor in Documentary Studies and American Studies at Duke University and the University of North Carolina at Chapel Hill. In addition to his numerous school and community performances, he has appeared on The Discovery Channel, The Learning Channel, National Geographic Channel and been featured in Our State magazine, PBS’ North Carolina Now and WUNC’s The State of Things.