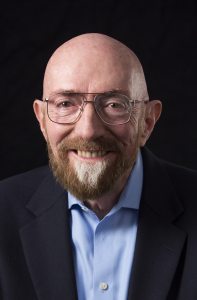 Theoretical physicist and Nobel laureate Kip Thorne will be the 2019 Frey Foundation Distinguished Visiting Professor, giving a free lecture that will be an engaging evening of stellar science for all audiences. The lecture will be titled, ““My Romance with the Warped Side of the Universe: From Black Holes and Wormholes to Time Travel and Gravitational Waves.”

Thorne was until 2009 the Feynmann Professor of Theoretical Physics at Caltech (where he still holds the emeritus title for this professorship), but retired to take up a new career career in writing and collaborations at the interface between science and the arts. That led to him being an executive producer and scientific adviser on the 2014 blockbuster film Interstellar. He has collaborated on other multimedia projects as well, and is known for his ability to explain these weighty scientific concepts in ways that non-scientists can understand.

In 2017 Thorne was awarded the Nobel Prize in Physics, along with colleagues Rainer Weiss and Barry C. Barish, for their contributions to LIGO  (Laser Interferometer Gravitational Wave Observatory Project) and the observations of gravitational waves, which occurred on Sept. 14, 2015. That observation confirmed a key piece of Einstein’s Theory of General Relativity. Thorne was a close friend of Stephen Hawking’s and is even depicted in the 2014 biopic The Theory of Everything. The two had a famous wager about whether Cygnus X-1 was a black hole—Thorne won the bet.

In 2018 he was awarded the Lewis Thomas Prize: Honoring the Scientist as Poet – “the rare individual who bridges the worlds of science and the humanities.”

The Frey Lecture is part of the A Constellation of Cosmos Events at Carolina, a joint series of related events by the College of Arts & Sciences with the Morehead Planetarium and Science Center and PlayMakers Repertory Company. The events include:

The Frey Foundation Distinguished Visiting Professorship is one of the highest honors bestowed by the College of Arts & Sciences at UNC-Chapel Hill to distinguished public leaders. Past speakers include Nina Totenberg, Fareed Zakaria, E.L. Doctorow, Ted Turner, Alice Walker and Christine Todd Whitman. This year marks the 25th anniversary of the lecture, with journalist Sidney Rittenberg ’41 as the inaugural speaker in 1994.

The Frey Foundation was established in 1974 by Edward J. and Frances Frey of Grand Rapids, Michigan. Their son, alumnus David Gardner Frey, BA ’64, JD ’67, is chairman of the foundation and a longtime supporter of UNC’s College of Arts & Sciences.