Folt addressed the crowd of 2,500 assembled in Polk Place after she took the oath of office as Carolina’s 11th chancellor. Her speech was titled “Carolina Strong – Ever Fresh, Forward and for the People.”

Watch a video of the speech.

The first woman to serve as chancellor, she was installed on University Day, the day that commemorates the 1793 laying of the cornerstone of Old East, the nation’s first state university building.

“I believe that Carolina can indeed be the leader in shaping the path for the great public university in America. We can show how you do it – to be the one that preserves excellence and innovation, access and affordability, a deep commitment to the state, and gathers strength to innovate and meet new challenges.” 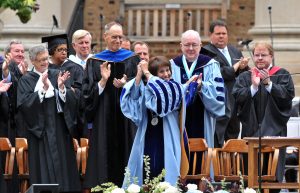 Carol Folt acknowledges the crowd’s cheers during the ceremony installing her as Carolina’s 11th chancellor.

Folt said Carolina’s ties to the birth of the nation are so profound that they challenge all who come here to become part of a grander purpose. She said she was fortunate to be among some of the brightest and most passionate people “with a drive to create, to teach, to learn and to heal.”

She commended Carolina students for their accomplishments in the classroom, on the playing fields and the stage, and as innovators for the future. Even more, she said, they stand out in the way they reach out to others. “They pride themselves as people who look outward, who care about the world,” she said. “This is not an inward, all-about-me place.”

When asked why she wanted to lead a large public university, Folt said the answer was simple: “Like you, I am deeply inspired by Carolina’s history and its higher purpose. I have confidence in our people, and I believe in the capacity of this great public university to help build a just, safe, more prosperous and sustainable world.”

Carolina began as a “fresh idea for a new nation,” Folt said, and it is vital to keep that same freshness at a time of accelerating change.

“What happens here next and indeed in all America’s great publics will have an enormous influence in the nation and in the world. Our universities have been the envy of the world for decades. They have given our nation its great competitive advantage and protected our liberty since the birth of our country. …

“Our future depends on keeping them strong.”

Read the text of the speech.

Keep Reading You can do it!