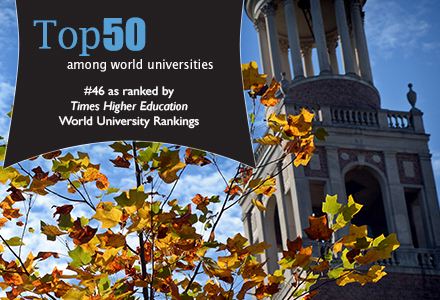 The 2014-2015 ranking, released Oct. 1, is based on 13 separate performance indicators designed to capture the full range of university activities. Those indicators cover teaching, research, citations, industry income and international outlook.

“A great university must be a global university, and this ranking is another indication of Carolina’s international excellence,” said Chancellor Carol L. Folt. “As a leading global public research university, Carolina inspires research, creates international citizens, influences teaching and learning and makes an impact around the world. To be recognized once again by the Times Higher Education magazine for that work is an honor.”

In recent rankings done by other publications, Carolina was rated fifth among the nation’s best public universities by U.S. News & World Report , and an article in the The New York Times called Carolina third among the most economically diverse colleges, behind Vassar and Grinnell, and first among public universities.