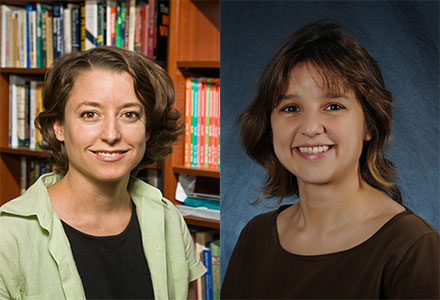 Two professors at the University of North Carolina at Chapel Hill have been honored as inaugural 2015 Andrew Carnegie Fellows by the Carnegie Corporation of New York. Patricia Sullivan, an associate professor in the department of public policy and the curriculum in peace, war, and defense in the College of Arts and Sciences, and Zeynep Tufekci, an assistant professor in the UNC School of Information and Library Science and an adjunct professor in the department of sociology, also in the College of Arts and Sciences, are two of 32 scholars selected for the honor.

The new annual fellowship program provides up to a $200,000 award to junior, emerging, or senior scholars, journalists, and public intellectuals in the humanities and social sciences who are pursuing research on the challenges facing U.S. democracy and international order in the next 25 years. Recipients are enabled to take a sabbatical of between one and two years to research and write.

“We have phenomenal faculty here at Carolina and I am so pleased the Carnegie Corporation has recognized not just one, but two of our best this year,” said Chancellor Carol L. Folt. “I congratulate Tricia Sullivan and Zeynep Tufekci on such a tremendous honor and am confident they will use this opportunity to continue making a powerful impact in policy and technology.”

The fellowships aim to provide new perspectives on the program’s overarching theme for 2015: Current and Future Challenges to U.S. Democracy and International Order. Winning proposals address issues including policing and race, big data and privacy, the impact of an aging population, the safety of generic drugs, and how attitudes are formed among voters. The Corporation will award a total of $6.4 million to the inaugural class. At UNC-Chapel Hill, the Center for Faculty Excellence coordinated and supported the process of submitting faculty applications along with the Office of Corporate and Foundation Relations.

“It is my hope that the work of the Andrew Carnegie Fellows will help inform the American public as well as policy makers,” said Vartan Gregorian, president of Carnegie Corporation.

Sullivan, an award-winning teacher and scholar, focuses her research on the utility and limitations of employing military force and providing foreign military assistance to attain policy objectives. She has been published in numerous respected academic journals and has authored a highly regarded book published by Oxford University Press in 2012, titled “Who Wins? Predicting Strategic Success and Failure in Armed Conflict.”

Sullivan has been invited to present her research to academic audiences, military officers, and civilian Department of Defense personnel. Her work has attracted funding and recognition from the National Science Foundation, the Smith Richardson Foundation, the Peace Science Society International, the Office of Naval Research, and the Institute on Global Conflict and Cooperation. She is on the Executive Board of the Triangle Institute for Security Studies and the advisory board for the Correlates of War Project. Sullivan teaches courses in national and international security, global policy, and social science research design and is training and supporting a new generation of scholar-practitioners through the U.S. Army’s Advanced Strategic Planning and Policy Program, a multi-year program that prepares field-grade officers for service as strategic planners.

Sullivan’s project investigates the long-term impacts of providing lethal assistance to non-state armed groups and the factors that mitigate or exacerbate the negative effects of state sponsored weapons flows into conflict zones. She intends to produce both academic journal articles and more broadly accessible publications for policymakers, practitioners, and the general public. Because she believes it is especially important to bring the results of relevant social science research to members of the military, who are critical to the implementation of U.S. foreign policy in conflict zones, she will engage in outreach to senior professional military education institutions and organize a conference convening experts from academic, military, governmental and nongovernmental institutions. Her Andrew Carnegie Fellowship will be supplemented with support from the UNC-Chapel Hill College of Arts and Sciences.

“I feel incredibly fortunate to receive such generous support from the Carnegie Corporation of New York for my project on state-sponsored arms transfers to violent non-state actors,” said Sullivan. “This fellowship provides me with an extraordinary opportunity to conduct research on how lethal assistance provided to armed groups during conflicts impacts prospects for democratization, stability and human security in post-conflict countries and neighboring states. I intend to disseminate the results of this project to a range of audiences — from academics to policymakers, military leaders and nongovernmental organizations working to promote peace and stability in the wake of civil wars. “

In addition to her positions at UNC-Chapel Hill, Tufekci serves as a faculty associate at Harvard University’s Berkman Center for Internet and Society and was previously a fellow at the Center for Information Technology at Princeton University. Her research interests revolve around the intersection of technology and society. Her academic work focuses on social movements and civics, privacy and surveillance, and social interaction. Tufekci is also increasingly known for her work on “big data” and algorithmic decision-making.

Originally from Turkey, and formerly a computer programmer, Tufekci became interested in the social impacts of technology and began to focus on how digital and computational technology interact with social, political and cultural dynamics. Her work has appeared in a wide range of outlets, from peer-reviewed journals to traditional media and blogging platforms. Her forthcoming book Beautiful Teargas: The Ecstatic, Fragile Politics of Networked Protest in the 21st Century, to be published by Yale University Press, will examine the dynamics, strengths and weaknesses of 21st century social movements. Zeynep is currently a contributing opinion writer at the New York Times and also publishes essays at The Message on Medium, a new media platform. Zeynep can be found online on Twitter as @zeynep, and on her personal blog, http://www.technosociology.org.

“This fellowship will allow me to study the implications of the emergence of behavioral ‘big data’ and the associated algorithms and analytics that are applied to these data for civics, society and privacy,” said Tufekci. “I was surprised and thrilled to be given this opportunity to spend a year studying such an important topic!”

In launching the fellowship program, the Corporation sought nominations from nearly 700 leaders from a range of universities, think tanks, publishers, independent scholars, and non-profit organizations nationwide, who collectively nominated more than 300 people. Only four universities claim two fellows from the inaugural class, including UNC-Chapel Hill, Stanford University, Harvard University and the University of Michigan.