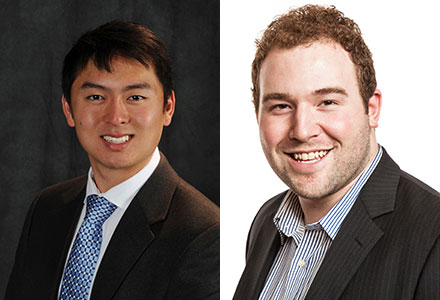 Larry Han, a fourth-year student at the University of North Carolina at Chapel Hill, and Max Seunik, a 2015 Carolina alumnus, have been named recipients of the inaugural Schwarzman Scholars program award, an elite China-based scholarship modeled after the prestigious Rhodes Scholarship and founded by American financier and Blackstone Co-Founder and CEO Stephen A. Schwarzman.

This innovative, new master’s degree program supports the study of public policy, economics and business or international studies at China’s prestigious Tsinghua University and bridges the academic and professional worlds to educate students about leadership and China’s expanding role in the world.

Han and Seunik were selected from more than 3,000 applicants for the award, which provides unparalleled learning opportunities with leaders from China and the world through high-level interactions at lectures, an internship program, a mentorship network and intensive travel seminars. They are Carolina’s first Schwarzman Scholars, and were two of only 111 global recipients (44 percent from the U.S., 21 percent from China and 35 percent from the rest of the world) of the one-year award.

“This is a tremendous honor to have two Carolina students among the first cohort of Schwarzman Scholars,” said Chancellor Carol L. Folt. “Larry Han and Max Seunik are outstanding young men – gifted leaders and dedicated humanitarians who are deeply passionate about advancing global health and development. This opportunity for immersive study in China will propel them even further in their pursuits to improve lives around the world.”

Han, 21, is the son of Bajin Han and Xiaomin Li, and is from Raleigh, North Carolina. He is a 2012 graduate of Leesville Road High School and plans to graduate this May with a major in biostatistics from the Gillings School of Global Public Health and minors in chemistry and mathematics from the College of Arts and Sciences.

Han is a Morehead-Cain Scholar, a Phi Beta Kappa member and an Honors Carolina student, who is currently working on his senior honors thesis on malaria vaccine efficacy. He is also a recipient of Carolina’s Phillips Ambassador Scholarship as well as the Barry Goldwater Scholarship.

Han’s contributions at Carolina include working with the UNC Great Decision Lecture Series to conduct weekly discussion groups on foreign policy on campus and at assisted-living communities throughout the region, serving on editorial board of the undergraduate medical journal “Corpore Sano” and tutoring local elementary and middle school students in math, leadership skills and Mandarin verbal communication.

A nationally ranked teenage golfer, Han’s love of statistics sprang from his love for the links. When a wrist injury curtailed his ability to play at a higher level, he established a clinic to help golfers improve their game using a formula he devised to chart statistical data of their performance. Han spent this past summer at Wasserman Media Group with the golf consulting division, designing a novel method for assessing PGA Tour event marketability. He also spent three months in Guangzhou, China using biostatics to improve HIV self-testing uptake, which culminated in a presentation at the UNC-Project China Center.

His work as a research analyst at the London School of Hygiene and Tropical Medicine led to an NIH grant that he used to design a “non-inferiority randomized controlled trial” to assess HIV testing in key populations. He has six co-authored peer-reviewed publications, earning first author credit for two of the publications, and has presented his work at conferences in Canada, Australia and Washington, D.C. This spring Han will co-teach a course for undergraduates entitled “The Re- emergence of Infectious Diseases: From Cholera to Ebola and Beyond.”

Han hopes to use statistics to help people improve their health outcomes and has already made notable contributions in the treatment of HIV infection and malaria in China and Africa. He plans to pursue the public policy track in the Schwarzman Scholars program and aspires to a career where he can leverage research institutions and industries in the U.S. and China to drive innovative solutions to global problems.

“The Schwarzman Scholars program will allow Larry to study how public policies in China affect its health system,” said Mary Floyd-Wilson, director of Carolina’s Office of Distinguished Scholarships. “With expertise in biostatistics and epidemiology, Larry is not only a brilliant scientist but also a generous humanitarian. It’s gratifying to know that this program will enable Larry to accelerate his research and ensure that his work on disease transmission has a global impact.“

Seunik, 23, is the son of Pierre Albert Seunik and Lézanne Montgomery Seunik, and is from Mississauga, Ontario, Canada. He is a 2010 graduate of Gordon Graydon Memorial Secondary School and graduated from Carolina in May 2015 with a major in health policy and management from the Gillings School of Global Public Health and a minor in Islamic and Middle Eastern studies from the College of Arts and Sciences.

Seunik was a Morehead-Cain Scholar and was inducted into Phi Beta Kappa while at UNC-Chapel Hill. He also completed a senior honors thesis under the supervision of Dr. Benjamin Mason Meier entitled “Human Rights Mainstreaming in the World Health Organization: A Comparative Study of Regional Offices,” and the thesis has since been used to guide how the World Health Organization’s Africa office approaches health and human rights in the region.

At Carolina, he was chair of the Great Decisions Program, the Vice-Chair of the Honor Court and worked in the local community to evaluate living and working conditions for migrant workers in North Carolina. He helped develop and implement the UNC Men’s Project—a 12-week experiential education course that brings together male-identified campus leaders to discuss healthy masculinity and design campaigns to change the terms of gender discussion. Seunik also played a leadership role organizing the interdisciplinary academic conference, “Who Owns the Arctic” during his second year at Carolina and co-founded the Raleigh Global Shaper’s Hub of the World Economic Forum – a community of young professionals dedicated to local public service projects.

His passion for social justice and human rights began in high school, when he traveled through Tanzania as a World Vision Youth ambassador, advocating for increased youth involvement in development. Since then, he has devoted himself to youth and human rights initiatives globally, appearing on panels at conferences in South Africa, Turkey, Indonesia, Colombia, and at TEDxGillings. As Global Advocacy Director of Canada’s premiere youth organization, Young Diplomats of Canada, Seunik also represents Canadian youth abroad. Most notably, he served as Head Delegate of Canada’s delegation to the G20/Y20 in Sydney, Australia and negotiated a list of policy recommendations that were presented to world leaders.

During a gap year at Carolina, Seunik spent six months in Rio de Janeiro researching the effectiveness of domestic violence prevention networks and shadowing senior World Bank leadership. He later presented his research at the 58th United Nations Commission on the Status of Women. He has completed fieldwork in Rwanda with Rwandan Minister of Health Dr. Angnès Binagwaho, and in Mali with Intrahealth International. His work yielded three forthcoming co-authored articles, a textbook on global health and social justice and a report on the legal status of discrimination against women in Mali in partnership with the International Labor Organization.

Seunik leads a research team for Innovations for Poverty Action as well as researchers from the University of Pennsylvania to better understand barriers to local public service delivery and improve government outcomes. He intends to pursue the public policy track in the Schwarzman Scholars program and aspires to more effectively bring together distinct policy actors – like China and the United States – to build concerted action on poverty alleviation for the most vulnerable.

“As a Schwarzman Scholar, Max will examine Chinese investment policy in Africa to enrich his understanding of developmental interventions and their effects on at-risk communities,” said Floyd-Wilson. “Extraordinarily compassionate, Max has devoted his life to fighting inequality on global scale, and it will be exciting to see how the Schwarzman Scholars program enhances the reach and impact of that fight.”

Designed to prepare the next generation of global leaders, the Schwarzman Scholars program is the first scholarship created to respond to the geopolitical landscape of the 21st century by giving students the opportunity to develop leadership skills and professional networks through a one-year master’s degree at Tsinghua University in Beijing, China. Stephen A. Schwarzman personally contributed $100 million to the program and is leading a fundraising campaign to raise an additional $350 million from private sources to endow the program in perpetuity. The $450 million endowment supports up to 200 scholars annually from the U.S., China and around the world.

Scholars chosen for this highly selective program live in Beijing for a year of study and cultural immersion, surrounded by an international community of thinkers, innovators and senior leaders in business, politics and society. In this environment of intellectual engagement, professional development and cultural exchange, they pursue their academic disciplines, travel, build their leadership capacities and develop a better understanding of China.