For Bill Roper, the past few years have been challenging.

The recession that began in 2008 resulted in a series of state budget cuts to the medical school and the hospital, and intensified competition for federal research grants from the budget-strapped National Institutes of Health, said Roper, who is dean of the School of Medicine and CEO of the UNC Health Care System, as well as the vice chancellor for medical affairs at Carolina.

But, Roper added, the hard times haven’t stopped people from getting sick, or the population of North Carolina from getting bigger – or older.

The graying of Baby Boomers will continue to impose a growing demand for health care in the state for years to come, even as it takes away a significant number of doctors available to care for them. That’s because many of the doctors now practicing are Baby Boomers at or near retirement age, Roper said. At the same time, the Affordable Care Act has increased access to health care to those previously uninsured, which has intensified the demand for care.

That’s why the $2 billion Connect NC bond referendum that will be voted on March 15 comes at such a critical time, Roper said.

If approved, the bond would provide $68 million to build a bigger, state-of-the-art medical school building to supply the next generation of doctors to meet the state’s burgeoning needs, he said.

“The UNC School of Medicine has a proud 60-plus-year history of training the next generation of physicians, clinicians, scientists and health professionals that North Carolina needs to serve the health of our growing – and aging – population,” Folt said.

“We want to continue that legacy by delivering the very best in medical education. A new facility is critical to advancing our mission and would allow us to increase enrollment, offer cutting-edge training to future doctors and ultimately save lives in all 100 counties.”

Not your father’s medical school

It would not be enough to say that a new medical education building is needed just because Berryhill Hall is old.

But Julie Byerley, the vice dean for education and chief education officer for the School of Medicine, said there is no escaping the fact that Berryhill was designed to accommodate old ways of teaching that no longer work.

In August 2014, the school launched Translational Education at Carolina (TEC), a modern curriculum that seeks to transform the way medical students learn the art and science of medicine by integrating basic sciences and clinical skills and offering clinical opportunities in specialty fields to better inform residency program decisions, she said.

This redesigned curriculum calls for a modern medical school building designed to promote that kind of learning, Byerley said.

“Berryhill was designed in the early 1960s and was built in the late ’60s at a time when the thinking was: for students to learn, they needed to be isolated so they wouldn’t be distracted by the outside world. And so the classrooms in Berryhill have no windows,” Byerley said.

“The classrooms are filled with the black-topped laboratory benches that students’ parents might recognize from their high school biology class. Students put their laptops on the edge of the sinks they don’t use anymore, hoping they don’t fall in.”

While the old benches have not been replaced, the chalkboards at the front of the classes are about to be replaced with white boards. Harder to change are the big lecture halls with inflexible stadium seating that doesn’t allow students to break into small discussion groups where they can learn from each other. Many classrooms can only fit a certain number of students.

There is also a need to expand space for hands-on learning where students simulate real-world situations they will face as practicing physicians working within a wider team of nurses and specialists.

The science keeps changing at a rate that makes it impossible to learn all that the students will need to know throughout their careers – a changing reality that means medical schools must equip students with the skills to be lifelong learners, she said.

And to keep learning from each other.

“The way health care is practiced today is much more inter-professional and team-based,” Byerley said, “and the relationship doctors have with patients has become less directive and more collaborative as well.”

“Presuming the people of North Carolina vote to do this, we are not just going to go build a 1965 building bigger,” he said. “We are going to bring the best minds on our faculty and leaders and architects who do this kind of thing and ask the question, ‘How are we doing medical education in 2016, and in the next 50 years, what is that going to look like?

“Increasingly, we are using simulation in the teaching of our medical students, so they will have lots of experience doing things and learning physical diagnosis well before they encounter a live patient. That’s what we are doing now, and we want to do more of that and do it better.”

But the biggest reason a new medical school building is needed is because Berryhill is not big enough to educate the number of doctors that the state of North Carolina will need.

“Right now we essentially have a distribution problem – both in terms of specialty distribution and geography,” Roper said. “Overall, we do not have enough primary care doctors, family physicians, internists, general surgeons, general psychiatrists or pediatricians.

“The geographic maldistribution can be seen in the big metropolitan areas of our state where there are lots of doctors, while in most rural areas and some urban inner cities there are not enough.”

For years, the medical school accepted an incoming class of 160 students. In fall of 2012, that number was increased to 180 students.

“We are filled to the gills right now,” Byerley said. Even though the UNC Board of Governors has approved increasing the cohort of students to 230, 180 is all that we can hold.”

Both Roper and Byerley stressed that, despite the challenges, the School of Medicine has much to be proud of, from the Nobel Prize in Chemistry that scientist Aziz Sancar won last fall to the fact that, in the most recent annual survey by the Association of American Medical Colleges, the school ranked in the 95th percentile among all medical schools in the country in student satisfaction. It continues to outperform other medical schools in winning NIH grants.

Yet, none of these successes can be taken for granted. And a new medical school building is one way to assure they won’t.

As Roper put it, “We have a medical education program that is second to none and we are proud of it. As one of the nation’s finest medical schools, we want to continue that upward path, and for us to do that with success we simply need a new medical education facility.”

Roper cites the phone calls he gets from people across the state – about a wife who has just been diagnosed with breast cancer, or about a child who has a brain tumor.

“They do not call me and ask, ‘Do you have a pretty good oncologist for my wife?’ or ‘Can you give me the name of an average neurosurgeon for my child?’ No. They want, for obvious reasons, the latest and the best.

“They want the ability to tap into the trials for the latest cancer drug or the latest procedure for their child with a brain tumor. And that’s what we want to give them. Not because we are dazzled by the shiny objects, but rather, that’s what we’re here for, which is to serve the people of North Carolina.” 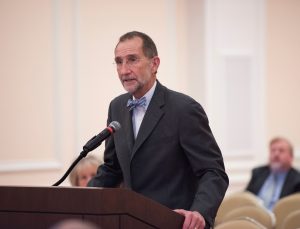 Dean Bill Roper says the School of Medicine needs a bigger, state-of-the-art medical education building to supply the state with the next generation of doctors.