Eating disorders have the highest mortality rate of any mental illness. In fact, more than 10 percent of people with anorexia nervosa – dieting and/or exercising to the point of emaciation – will die prematurely from complications related to their eating disorder.

The Food and Drug Administration hasn’t approved any medication to treat anorexia, and its causes are shrouded in mystery. But psychologist Cynthia Bulik is sure of one thing: eating disorders are not a choice.

“Anorexia has been misunderstood by lay people and by the professional community for a very long time. Those of us who have been in the field working with these people realize no one would ever choose to develop this illness,” said Bulik, founding director of the UNC Center of Excellence for Eating Disorders (CEED, pronounced “seed”) and Distinguished Professor of Eating Disorders.

But if it’s not a choice, just what does cause already thin people to starve themselves and still think they look fat? Bill Nato, lieutenant and patrol supervisor in the Department of Public Safety, used to do that. As a middle-aged professional man, he doesn’t fit the stereotypical image of someone with an eating disorder. But he has the same symptoms.

The man in the mirror

Nato, born two months premature, started life underweight. As a young child, he was a picky eater, living largely on bologna sandwiches and nothing else. But at 7, he began getting allergy shots that increased his appetite. The no-longer-picky eater soon put on so many pounds that he became the target of schoolyard bullying about his weight.

“At 13 years old,” he recalled, “I made a conscious decision to lose weight. And I said to myself, ‘I am never going to be overweight again.’”

And he never was. But as someone who suffers from anorexia nervosa, he has been dangerously underweight.

Nato doesn’t see himself the way others see him. Now in recovery, he looks thin and is meticulously groomed, with neat dark hair and glasses.

But when he looks in the mirror, Nato sees a man who still needs to lose weight. He sees other people just the way they are. In fact, he’s so logical and precise at work that his nickname is Mr. Spock. But to his eyes, his own image is the exaggerated, distorted reflection from a carnival fun house mirror. He
avoids mirrors.

Whenever life got stressful – kids calling him fat, starting a new job, realizing that his newborn son had autism – Nato returned to those old habits that made him feel comfortable. “The one thing I could control was my weight,” he said. “It’s addictive.”

It’s in the genes

Researchers have known for the last decade that there is a genetic link to anorexia nervosa. Studies of large samples of twins have revealed that the heritability of anorexia nervosa is between 40 to 60 percent – meaning that genes play a substantial role, said Jessica Baker, CEED’s associate research director.

With this in mind, eating disorder researchers began to collect blood samples from anorexia nervosa patients to identify the precise genes that influence risk for this disorder.

But as scientists’ understanding of the human genome grew, what had once been thought to be an adequate sample size turned out to be not nearly large enough. The minimum for concrete results seemed to be around 10,000 cases, with major studies on mental illnesses like depression reaching 100,000 cases.

To get the number of samples needed, eating disorder researchers across the world realized they would have to work together. Researchers from Denmark, Sweden, Australia, and the United States pooled their samples into the largest-ever genetics study of eating disorders, the Anorexia Nervosa Genetics Initiative (ANGI). The study is now in its fourth year and still recruiting participants to reach the goal of 25,000 cases. Charlotte’s Helix, a parallel project in the United Kingdom, is also boosting the number of international samples.

People who have experienced anorexia nervosa are particularly enthusiastic about the study, Bulik said. They are telling the researchers, “My biology is haywire and I want to know why.”

Even though anorexia nervosa has a genetic component, it is not a one-gene disorder like Huntington’s disease or sickle cell anemia.

“There won’t be a blood test. There’s not one anorexia nervosa gene,” Bulik said. Instead, she thinks there are hundreds of genes that have an impact on the disorder. She also expects there will be much genetic overlap with eating disorders and other mental illnesses like depression, anxiety and obsessive-compulsive disorder.

Bulik is particularly interested in the source of the physical ability of many people with anorexia nervosa to function while severely underweight. “They have this uncanny ability to attain and maintain an unhealthy body weight,” she said. “By all laws of biology, they should feel more ill than they do.”

Even more amazing, they actually feel better when they are starving. “For most of us, being in negative energy balance doesn’t feel good,” Bulik said. “Most of us get grumpy and hungry when it’s time for the next meal. We feel better once we’ve eaten.”

But not people with anorexia nervosa. “Their bodies have a different response. Negative energy balance calms them,” Bulik said.

In search of perfection

“I could go an entire day and not eat anything and feel good,” Nato recalled. “The more weight I lost, the better I felt. When I was at my lowest dangerous weight, I still said I wanted to lose.”

Nato reached his nadir last summer. The thick chest protection worn by officers disguised his disorder from his co-workers most of the time. But when they saw him in civilian clothes – a short-sleeved shirt and khakis – at a retirement ceremony in June, his thinness alarmed them. One co-worker had expressed her concern about Nato the week before, during her exit interview.

Chief Jeff McCracken, joined by two of Nato’s superiors, called the lieutenant into his office. The three were also Nato’s friends. “Bill, we’re worried about you,” the chief told him. “We want to help you.”

Nato said this was his wake-up call. He wasn’t half so concerned about dying as about losing his job. “I didn’t want to not be a police officer anymore,” he said, so he told them, “I’ve got a problem and I need help.”

After consulting with the department’s physician, Nato sought treatment at CEED. He still works twice a week with a therapist and once a week with a dietitian there. Recovery is still hard.

“I have to make a conscious effort every day to eat regularly. I was not good at that before I started at CEED,” Nato said.

Since there is no medication for anorexia nervosa, renourishment and psychotherapy is the treatment CEED uses. “We say, ‘food is your medicine.’ And therapy is a critical component of recovery,” Bulik said.

The hope is that the ANGI study will lead to more and better treatment options.

“We hope to develop more targeted treatment,” Baker said. Genetic information might even prevent eating disorders, flagging those at high risk and urging them to avoid negative energy balance through too much exercise or not enough food.

Nato is recovering, but he’s not cured. When he started getting compliments on how good he looked, he thought that meant he was gaining too much weight and began dieting and over-exercising again.

“I have a fear of being overweight,” admitted Nato, a participant in the ANGI study. “But I also have hope for the future, based on the study.”

Volunteer for the study:

To meet its recruitment goals by June 30, the ANGI study needs more participants, people with anorexia nervosa and healthy people, to complete a 30-minute questionnaire and a give a blood sample. Participants get a $25 Amazon gift card. To sign up, click here. For more information, call 919-966-3065 or email: angi@unc.edu. 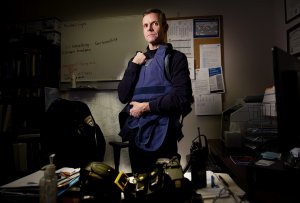 Keep Reading Past its prime