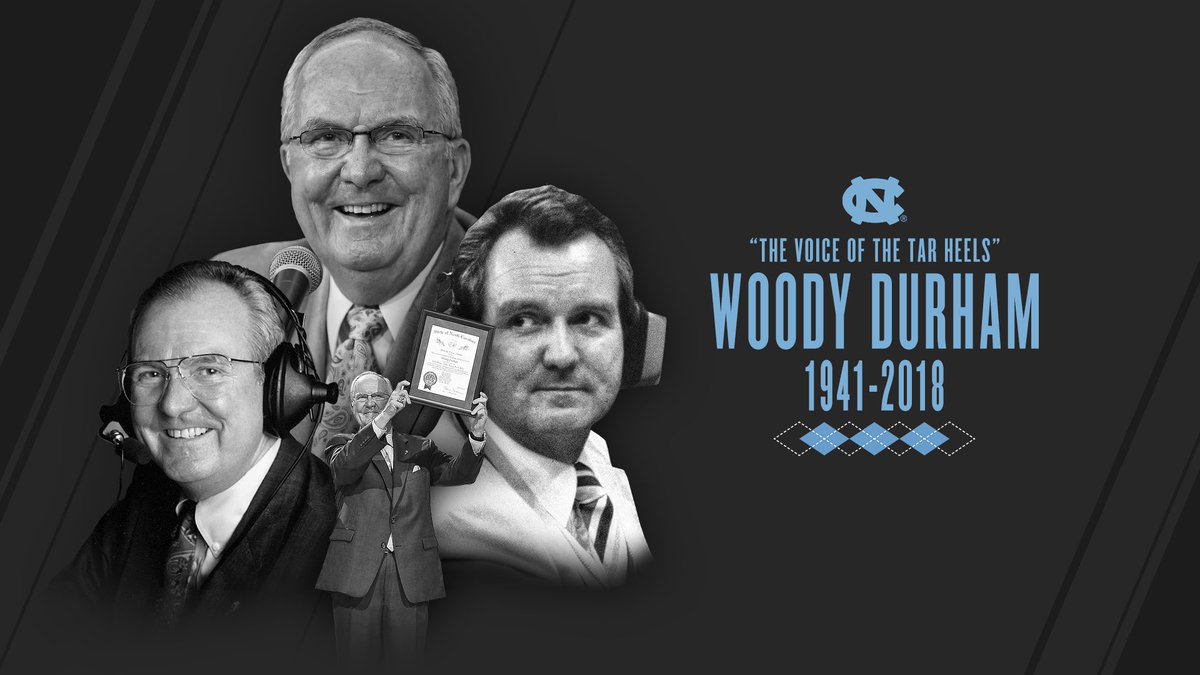 Woody Durham, the beloved and iconic Hall of Fame voice of Carolina Basketball and Football for 40 years, died peacefully at home from complications from Primary Progressive Aphasia at 12:45 a.m. today. He was 76 years old.

A 1963 graduate of the University of North Carolina at Chapel Hill, Durham was the radio voice of the Tar Heels from 1971 to 2011, painting a vivid picture of Tar Heel legends for generations of fans, and became himself a Carolina institution.

The Atlantic Coast Sports Media Association will honor Durham at the 2018 ACC Men’s Basketball Tournament with the Bob Bradley Spirit and Courage Award, recognizing the grace and dignity with which in recent years he publicly dealt with Primary Progressive Aphasia, a degenerative brain disorder that negatively impacted his ability to communicate as he once mastered.

Durham received the Curt Gowdy Media Award for contributions to basketball from the Naismith Memorial Basketball Hall of Fame in 2015.

“Our family is grateful for the incredible support my dad and our family received throughout his illness,” said Wes Durham, Woody’s son. “From the medical teams to the general public, it’s been amazing. We hold to and will always cherish the wonderful memories he left for our family and Carolina fans throughout the world.”

“It’s a very sad day for everyone who loves the University of North Carolina because we have lost someone who spent nearly 50 years as one of its greatest champions and ambassadors,” said men’s basketball coach Roy Williams. “My heart goes out to Jean, Wes, Taylor and their entire family.

“It’s ironic that Woody would pass away at the start of the postseason in college basketball because this was such a joyous time for him. He created so many lasting memories for Carolina fans during this time of year. It’s equally ironic that he dealt with a disorder for the final years of his life that robbed him of his ability to communicate as effectively as he did in perfecting his craft.

“Woody loved the Tar Heels and players, coaches and fans of all ages loved him right back. We should all ‘go where we go and do what we do’ and say a prayer for Woody and his family. There will never be another quite like him.”

“Woody was synonymous with Carolina Athletics for decades and his voice was gospel to generations of Tar Heels who trusted his every word,” said John Swofford, commissioner of the Atlantic Coast Conference and director of athletics at Carolina from 1980 to 1997. “I was struck by how diligently Woody prepared for his broadcast of games. When game time arrived, he made it look and sound so easy because he had a voice that resonated just so, but much of it was because he worked incredibly hard at it. As they say ‘the great ones make it look easy.’ Woody was one of the great ones. He was just as good a person as he was a broadcaster.

“My thoughts and prayers, as well as those of the entire Atlantic Coast Conference, go out to Jean, Wes, Taylor and the entire Durham family.”

“‘Hark the sound of Tar Heel voices ringing clear and true’ – that’s Woody Durham,” said Dick Baddour, Carolina’s director of athletics from 1997 to 2011. “His voice was the sound of Carolina and it will forever ring clear and true. But it was always more than the sound of his voice; his success was determined by his professional approach, his preparation and his ability to develop the human side of the student-athletes and coaches who represented his alma mater. Woody was a legend among legends and the University will forever be grateful for how he represented the Tar Heels in such a first-class way.”

Since retiring after the 2010-11 football and basketball seasons, Durham continued to be honored for his work and contributions to the community: in 2011, the National Football Foundation presented him with the Chris Schenkel Award; in 2012, he was the inaugural recipient of the Nice Lombardi Excellence in College Broadcasting Award; in 2016, the towns of Chapel Hill and Carrboro named him a Town Treasure, which is given to its exceptional citizens; and last year, the Knoxville (Tenn.) Quarterback Club honored Durham with the Lindsey Nelson Broadcasting Award.

Durham called play-by-play on on the Tar Heel Sports Network on more than 1,800 football and men’s basketball broadcasts.

“Woody Durham was more than just the soundtrack of Carolina athletics every fall and winter,” said Chancellor Carol L. Folt. “To Tar Heels everywhere, he was our Carolina and brought the players, pageantry and excitement of hundreds of games into the lives of UNC fans throughout our state, nation and the world. It was a privilege to know him. Though he will be missed, he’ll be long-remembered by his legion of faithful followers who will always connect Woody with a beloved part of their lives.”

“I started listening to Woody call Carolina games when my brother (Steve) came to Carolina in 1984,” said Rick Steinbacher, Carolina’s senior associate director of athletics for marketing, whose games as a Carolina linebacker Durham called, was captain of the football team in 1993 and later served as the color analyst alongside Durham for 11 seasons.

“As a broadcaster, he is among the very best ever. His voice, his knowledge and passion for Carolina were unmatched. Working with him I learned even more about what made him so special, namely his work ethic, preparation and care for everyone he worked with set a standard for all to emulate. My heart goes out to his family and so many friends over the loss of a great man, a priceless gem and the Voice of the Tar Heels.”

He was sports director at WUNC while attending Carolina, sports director at WFMY-TV in Greensboro from 1963 to 1977 and at WPTF-TV in Raleigh from 1977 to 1981. Since 1981, he worked for the Tar Heel Sports Network with VilCom Inc. of Chapel Hill and Learfield Communications Inc. of Jefferson City, Missouri.

“I am filled with sadness at the loss of a mentor, friend and Carolina icon,” said Jones Angell, play-by-play announcer for Carolina Basketball and Football since Durham’s retirement in 2011. “Woody meant so much to me personally and professionally, and I feel honored to have worked with him and learned from him. We try to reach the standard of excellence Woody set for 40 years through his passion and professionalism on every broadcast on the Tar Heel Sports Network. We will continue that moving forward.

“My deepest sympathies go to his wonderful family: Jean, Wes and Taylor. All Tar Heels grieve with them today.”

Carolina fans are encouraged to share their favorite memories of Woody via Twitter @GoHeels using the hashtag #HeyWoody.

He is survived by his wife, Jean, to whom he was married for 54 years; their two sons, Wes and Taylor; and two grandchildren, Emily and Will. Wes is the radio voice of the Atlanta Falcons and broadcasts college football and basketball for Raycom Sports and Fox. Taylor is the play-by-play announcer for Elon University.

A celebration of Woody’s life is planned for April 8 at Carmichael Arena on the Carolina campus.

Memorial gifts may be made to the following: