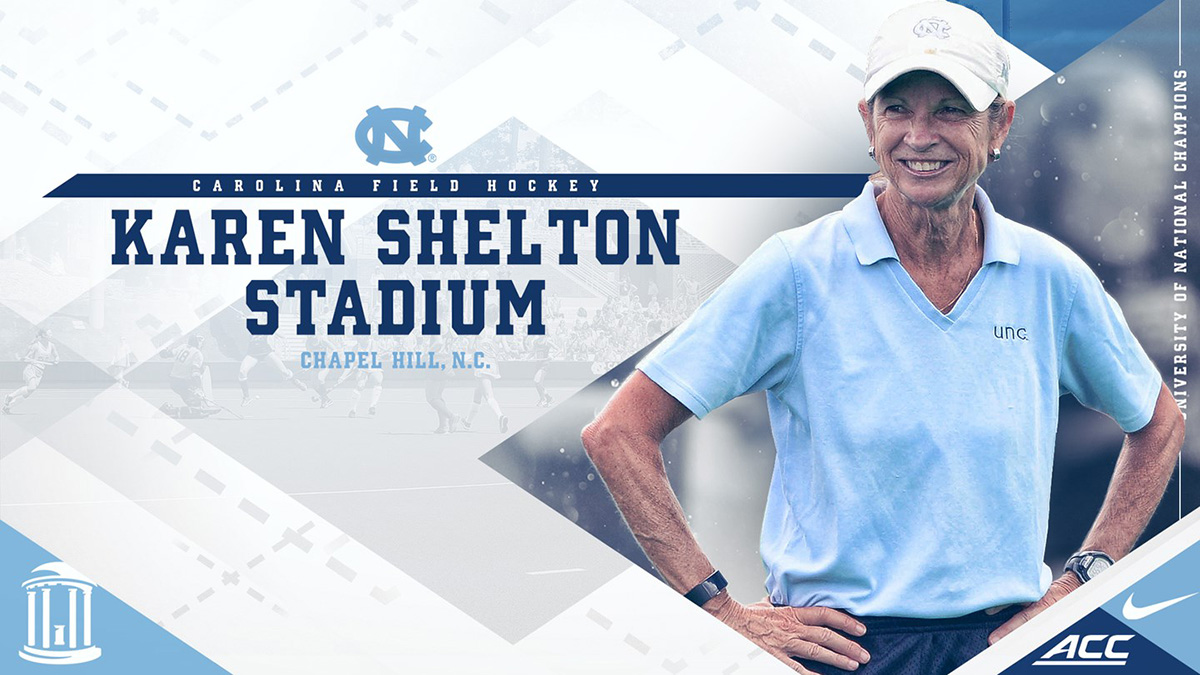 The University of North Carolina at Chapel Hill is naming its new field hockey stadium for Karen Shelton, the legendary Tar Heel coach now in her 38th season with the program. Ken and Cheryl Williams, longtime supporters of Carolina Athletics, wanted to recognize the accomplished coach and committed the lead gift to make Karen Shelton Stadium possible.

“I could not feel more honored and humbled by this gift,” Shelton said. “Ken and Cheryl have been good friends and supporters of our program for a long time. When they told me about their donation and that they wanted to name the stadium for me, I was so surprised and overcome with emotion. It’s a moment I’ll never forget.

“This stadium is such a wonderful tribute to all of the players and coaches who have come through our program and helped to make it great. I’m so proud that this outstanding facility is the new home for Carolina Field Hockey.”

“Naming this stadium after Coach Karen Shelton – who has been an amazing coach and mentor for almost four decades – expresses our gratitude for her dedication to women’s athletics,” said Chancellor Carol L. Folt.  “This is the first UNC playing field named in honor of a woman and the only UNC facility named for a female coach. I am very thankful for Ken and Cheryl Williams and all of Carolina athletics who helped make this wonderful new facility a reality and a heartfelt tribute to Karen’s contributions at Carolina.”

Karen Shelton Stadium is the first Carolina athletic playing facility to be named in honor of a woman. It is the only UNC-Chapel Hill facility named for a female coach or a current head coach and marks just the second time in school history that an individual will coach in a facility named for him or her. The first was the Dean E. Smith Center, where Smith coached the men’s basketball team for 11 and a half seasons between the building’s opening in 1986 and his retirement in 1997.

Among hundreds of buildings on the Carolina campus, Shelton Stadium is one of just a handful named for individual women. The others are Carmichael, Kenan and Spencer dorms, the Joan H. Gillings Center for Dramatic Art, the Sonja Haynes Stone Center for Black Culture and History, the UNC School of Nursing’s Carrington Hall, and the Mary Ellen Jones Building at UNC Hospitals. (Other campus buildings are named after families or multiple individuals.)

“I felt that with the experience she has at UNC and her six national championships, and the fact that she’s gone to the National Championship game so many times, that it needed to be named for her,” Cheryl Williams said. “We just wanted this for Karen. When I told her it was going to be for her, and we were going to make sure it happened, she told us ‘Oh no, it should be named for you,’ and I said, ‘No way!’ It’s not necessary for things to be named after us. This was important to me that it happened for her.”

Ken and Cheryl Williams, of Burlington, North Carolina are enthusiastic and generous supporters of Carolina Athletics and the University. They are currently two of the co-chairs of the Campaign for Carolina Athletics and have served in leadership roles with the UNC Lineberger Comprehensive Cancer Center and elsewhere on campus. Ken is a former chair and current member of The Rams Club’s Executive Board of Directors.

The Tar Heels moved into the new, state-of-the-art facility at the start of preseason in August. The Carolina blue chairback seats accommodate 900 fans, with more seating on the grass around the field for a total capacity of 1,000. The playing area includes a massive videoboard, European-soccer inspired benches and a three-level press box. The turf field is top-of-the-line and is a rarity among collegiate fields in being FIH-certified, attesting that it meets the high standards required for international competition. Carolina’s team building provides more than 10,000 square feet of space and includes home and visitor locker rooms, a team meeting room/theater, a coaches’ office, a sports medicine room, and an area for team meals and functions.

The program’s amazing history is highlighted throughout the building. Since becoming the program’s fourth head coach in 1981, Shelton has led Carolina to six NCAA Championships, 20 Atlantic Coast Conference Championships and 35 winning seasons. She ranks second in Division I field hockey history in total wins and her program holds records for NCAA Tournament appearances, games played and wins. This year’s team is ranked No. 1 in the nation and is 8-0 heading into Wednesday’s home game against Virginia.

While excelling in NCAA play, Shelton also has groomed players to represent the U.S. in international play — every U.S. National Team since 1989 has included at least one current or former Carolina player — and to succeed in a wide range of career paths. And her players have thrived academically, with seven earning All-ACC Academic Team honors for 2017 and 16 named to the 2017-18 ACC Academic Honor Roll.

“Karen’s program has been a model of success, on the field and off,” UNC Director of Athletics Bubba Cunningham said. “We want our students to achieve academically and athletically, and her team is a great example of that. UNC is consistently one of the top programs in the nation, and field hockey is part of our tradition of leading the way in women’s athletics.”

Karen Shelton Stadium is one of four facility projects coming online in the next several months as part of the Campaign for Carolina Athletics. The stadium will be joined by an Indoor Football Practice Complex (fall completion), a Track & Field Complex (spring completion), and a new Soccer & Lacrosse Stadium (spring completion). Fundraising for Karen Shelton Stadium, the other facilities, and campaign priorities, including student-athlete scholarships, continues. Interested supporters are encouraged to contact The Rams Club at 919-843-2000 or ramsclub.com for more information.