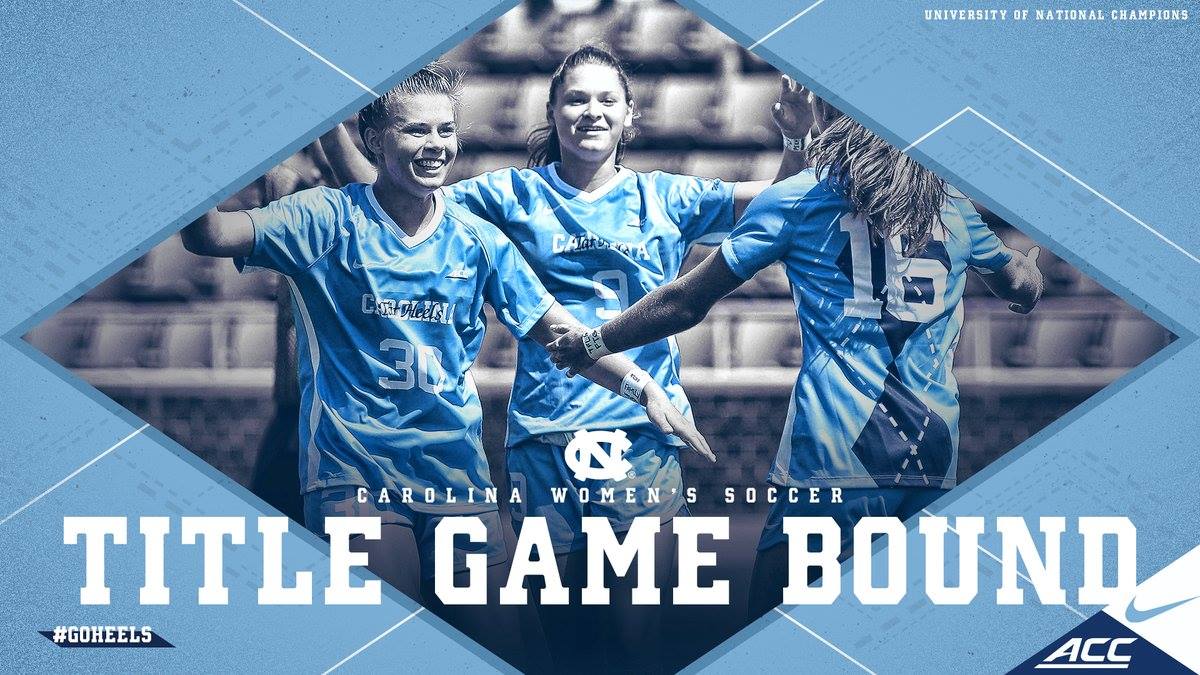 With more than 10,400 fans watching, North Carolina handed the Hoyas their first loss of the season as the Tar Heels advanced to the NCAA championship game. Carolina will play fifth-ranked Florida State at 1 p.m. on Sunday at Sahlen’s Stadium at WakeMed Soccer Park in Cary. The Seminoles defeated top-ranked Stanford, the defending national champion, 2-0, in Friday’s second semifinal game.

The Tar Heel goal came on a counterattack after Carolina defender Emily Fox chased down a ball on the end line after the Hoyas had made their first run deep into Carolina territory in the second overtime. Fox fed Ashley in the middle of the pitch and the senior defender started a brilliant counterattacking chance. Ashley fed freshman midfielder Brianna Pinto, who returned the ball to Ashley. The senior tapped the ball to her right on to the foot of Dorwart, who cleverly returned it to Ashley just inside the 18-yard box. One touch later, Ashley buried her shot low into the left side, past Georgetown goalkeeper Lauren Gallagher for the game-winner at 107:41.

In the first-ever meeting between the two teams, the Tar Heels improved to 21-3-2 on the season while the Hoyas suffered their first loss, dropping to 21-1-3. The first half arguably belonged to the Hoyas who outshot the Tar Heels 5-4 in the opening 45 minutes and had a 6-5 edge in corner kicks in the first period. But despite their slight edge statistically, the Hoyas put only one shot on frame in the first half, an effort by Kyra Carusa, which was gobbled up by Samantha Leshnak at the 35:24 mark. Georgetown goalkeeper Arielle Schechtman, the United Soccer Coaches first-team All-America keeper, made two saves in the first half, stopping Dorian Bailey at 25:32 and Rachael Dorwart at 42:58.

The Tar Heels pressed repeatedly in the second half with Schechtman making her third save of the game against Dorian Bailey in the 48th minute. In the 73rd minute, Fox had an opening from the 18-yard line but sent her shot high. The game then took a momentum swing in the 83rd minute, when a shot by Dorian Bailey was blocked by the Georgetown defense. Schechtman ran to the end line to try to prevent a corner kick but fell awkwardly and had to leave the game. Lauren Gallagher came on in goal for Georgetown, playing in only her third career game.

Less than two minutes later, Madison Schultz was taken down in the penalty box and the Tar Heels were rewarded with a penalty kick but Gallagher soared to knock Taylor Otto’s try from the 12-yard spot as the game remained tied at 0-0 with five and a half minutes to play.

Given the reprieve, the Hoyas got two shots from Caitlin Farrell in the final three minutes of play but neither try found the back of the net and the match went to overtime.

Carolina had a chance to end it in the 93rd minute as Brianna Pinto was taken down just outside the penalty area. Dorian Bailey’s free kick was blocked and her rebound effort went high. The Tar Heels also had a chance to end the game at 98:58 but Otto’s open shot in the box sailed just wide of the left post.

The second overtime period clearly belonged to the Tar Heels and eventually they broke through for the game-winner. In the 102nd minute, Bailey’s shot from close range was knocked down by Gallagher. The rebound bounced out to Schultz, whose strike was cleared off the goal line at the last second by Georgetown’s Meaghan Nally. On the ensuing corner kick, Ashley’s header was saved by Gallagher before another shot by Schultz at 105:31 went wide left. It took just over two minutes after that for the Tar Heels to celebrate their victory as Ashley’s sixth goal of the season ties her for the team lead with Brianna Pinto and Alessia Russo. She now has matched Russo’s team-leading four game-winning goals in 2018.

Carolina and Florida State will meet for the third time this season in the national final on Sunday. Carolina won the regular-season meeting in Tallahassee by a 1-0 score. The Seminoles defeated the Tar Heels 3-2 in the ACC Tournament championship game on Nov. 4 on the same field at Sahlen’s Stadium. Carolina leads the all-time series against the Seminoles 28-9-4.