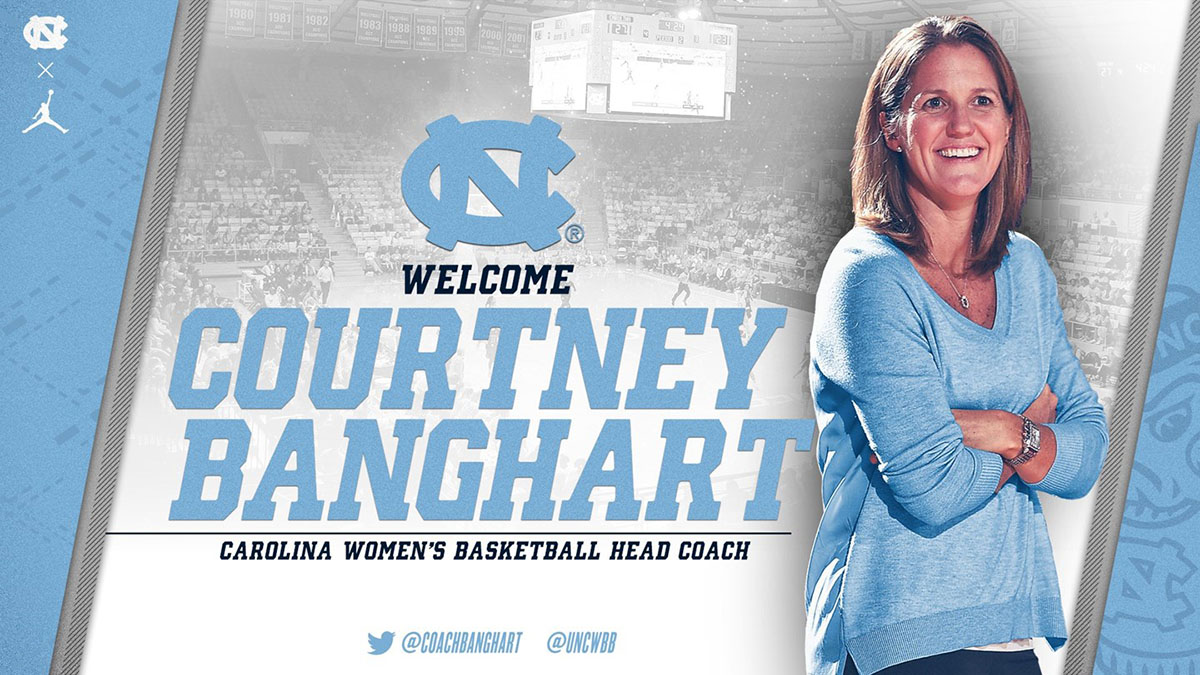 Carolina is adding another great leader to its family of championship-winning head coaches.

Banghart was the 2015 Naismith National Coach of the Year after leading Princeton to a 30-0 regular season record, and has helped propel the Tigers to the NCAA Tournament in eight of the past 10 years, winning seven Ivy titles along the way. In 12 years at Princeton, she has amassed a 254-103 (0.711) overall record with a 137-31 (0.816) mark against Ivy League opponents. All while emphasizing academic pursuit, service, and leadership.

“Courtney Banghart has proven she knows how to lead students to wins both on and off the court,’’ Carolina Director of Athletics Bubba Cunningham said. “She believes in developing strong character and a championship mentality, in recruiting and graduating players who want to serve their community, and in building relationships in and outside of her program. She is an outstanding addition to our department and University, and I am pleased to welcome Courtney and her family to our Carolina family.”

Banghart will sign a five-year contract with the Tar Heels and begin her official duties in the coming days. The terms of the agreement were approved by Carolina’s Board of Trustees on Monday morning.

“I’m so grateful to everyone who has made Carolina what it is: the women who have worn the Carolina blue, Coach Hatchell who hung a banner, the men’s program that brought us the Jump Man, the outstanding coaches who have been a model of consistent excellence, and the alumni who have loved this place with all their hearts,’’ Banghart said. “I’m honored to be your coach, and you will get my very best.”

Born and raised in New Hampshire, Banghart was four-year letter winner and three-year starter at Dartmouth College, where she graduated with a bachelor’s degree in Neuroscience in 2000. She was a two-time first-team All-Ivy selection and owns the Ivy League record with 273 career three-pointers. In 1999, she earned the Ed Seitz Award as the top three-point specialist in the nation after connecting on a program-best 97 three-pointers.

Banghart worked at Episcopal High School in Alexandria, Va., as the girls’ athletic director and head coach of the girls’ basketball and tennis teams — an experience, she says, that taught her the transformative power of teaching and coaching. She returned to her alma mater as an assistant coach from 2003-07, and Dartmouth won two Ivy League championships during her tenure as recruiting coordinator. She also used that time to earn a master’s degree in writing and leadership development.

In 2007, she took over a Princeton program that had never played in the NCAA Tournament — and she methodically transformed her team into a perennial NCAA participant that re-wrote both the Ivy League and Princeton record books. Over a dozen seasons, Banghart helped the Tigers to a plethora of team and conference firsts and bests, including: the top regular season record and longest win streak (men or women) at 30-0 in 2015; the highest NCAA tournament seed (#8); the Ivy league’s only at-large bid to the NCAA Tournament; the highest AP poll and coaches poll ranking (#13); and the first program in the Ivy League to be ranked nationally in the AP preseason poll.

She’s coached three Princeton players who have advanced to the WNBA, including the program’s first WNBA draft pick in 2018. Seven of her Tigers have gone on to play professionally overseas.