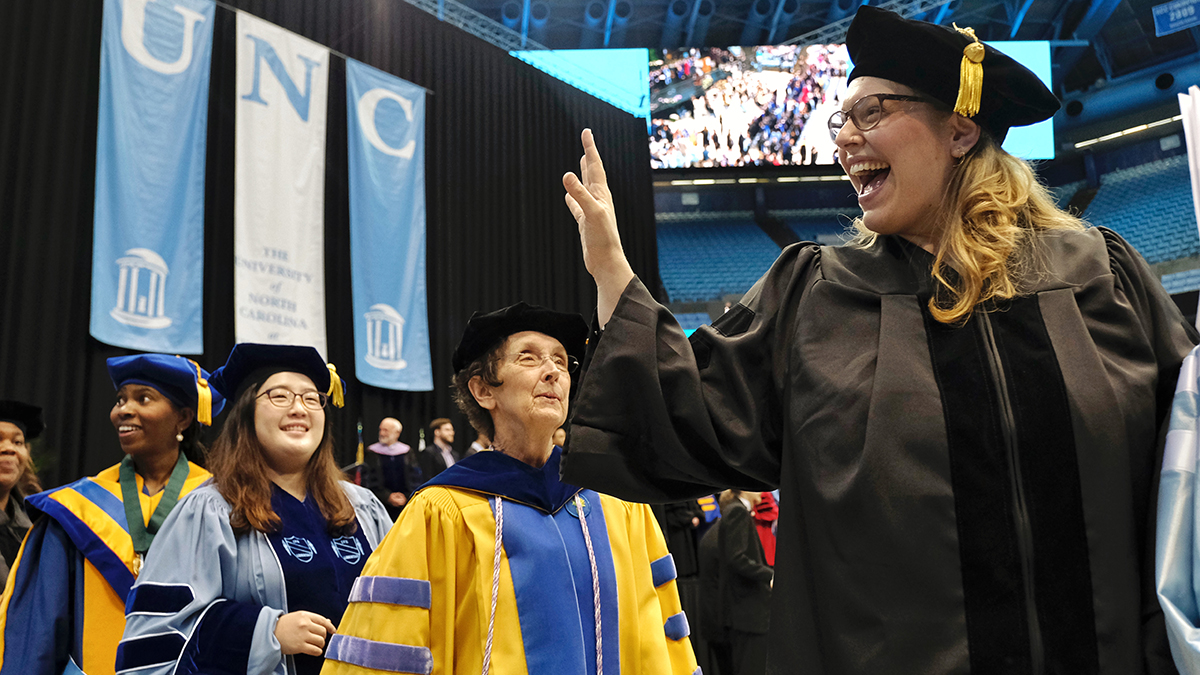 After dedicating several years to research, teaching and publishing, Saturday’s Doctoral Hooding Ceremony at Carolina could have easily symbolized the finish line for more than 250 students.

But graduation day, Interim Chancellor Kevin M. Guskiewicz said, is not the time for the graduates to slow down and kick up their feet.

Their work is just beginning.

“You know what it takes to achieve excellence,” Guskiewicz said. “Excellence is not really a noun. No matter what the dictionary may say, it’s an action word. The future will be defined by your action, education and the strength of your resolve to use all you have been given to take on the most daunting challenges of our time.”

Guskiewicz presided over the Doctoral Hooding ceremony that celebrated the 258 students who earned their doctoral degrees this academic year. The students, Guskiewicz said, were joining a small group of Americans with a doctorate.

“It was not an easy journey to this day,” he told the graduates inside the Dean Smith Center. “But now you’re here — this special, hard-earned day, the time when we celebrate your achievements, congratulate you on your research and thank you for teaching, mentoring and inspiring our students.”

“We’re counting on you to continue that work, to share with others what you learned here, to take on the challenges we face as a society and to succeed,” said Graduate School Dean Steve Matson. “Our world needs your leadership. As you go out into the world, you will carry Carolina’s standard of excellence with you.”

Not long ago, Ramesh Raskar was one of the young Ph.D.s sitting on the court of the Smith Center, ready to begin the next chapter of his career. On Saturday, he returned as the keynote speaker.

Raskar received his doctoral degree in computer science from UNC-Chapel Hill in 2002. He now directs the Camera Culture research group at the MIT Media Lab, where he is an associate professor within the Media Arts and Sciences graduate program.

With 90 patents to his name, Raskar has contributed to numerous inventions. Most notably, he co-invented a camera that “sees around corners,” portable eye testing devices that are used in more than 90 countries worldwide and a method for “reading” through closed books.

Now, nearly two decades after his own Doctoral Hooding, Raskar encouraged the graduates to follow their passions with purpose and a plan — like GPS navigating a chosen path.

“With a Carolina degree, we owe it to ourselves, our parents, our community and to the world, to do our part to make the world a better place,” he said.