Both of Carolina’s tennis teams moved one step closer to national championships.

The Tar Heels have advanced to their Final Four rounds this weekend. This marks the first time a program has placed both a men’s and women’s team in the Final Four since Cal in 2016.

For the second time in program history, North Carolina is headed to the men’s tennis final four. Friday at the USTA National Campus, the ninth-seeded Tar Heels took a 3-0 lead then held on for a 4-2 upset of top-seeded Ohio State. Sophomore Benjamin Sigouin capped a pressure-packed evening with a 3-6, 6-3, 6-4 win on Court 2 to clinch the victory.

Carolina improved to 22-6 with the win and reached the NCAA semifinals for the second time in the past three years after making the program’s first appearance in 2017. That year, Carolina finished as the NCAA runner-up.

The team will face Atlantic Coast Conference rival and defending NCAA Champion Wake Forest, the No. 4 seed, on Saturday at 4 p.m. The winner moves on to play for the national title on Sunday at 3 p.m.

The doubles point on Thursday came down to Court 3, after OSU won 6-1 on Court 1 and UNC won 6-2 on Court 2. On the third court, Carolina’s Simon Soendergaard and Mac Kiger battled Ohio State’s John McNally and Hunter Tubert, who came into the match undefeated on the year at 20-0. But the Tar Heels picked up the win, 6-2, to claim the early lead.

Carolina won in straight sets on the first two singles courts to finish, with the team’s rookie and its most experienced player doing the honors. On Court 4, freshman Brian Cernoch won 6-2, 6-0 over Ohio State’s Martin Joyce to make it 2-0 Tar Heels. On Court 5, senior Blaine Boyden beat Alex Kobelt 6-1. 6-3 to put Carolina up 3-0.

That left Courts 2 and 6 to decide the match. On Court 2, McNally won four games in a row, but Sigouin kept his composure. Up 5-4 and holding the serve, he delivered a second-serve ace to make it 30-all in the final game. At the same time, Soendergaard was battling in a third set on Court 6. He had just gone up 6-5 when Sigouin won his match. 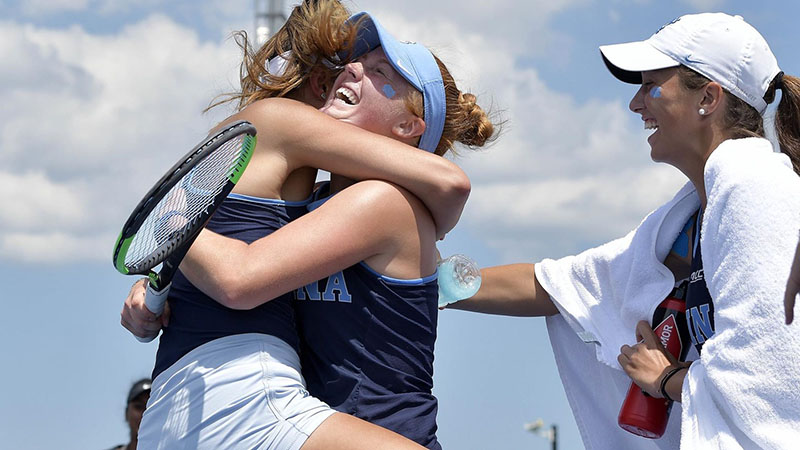 The next day, the women’s team punched their ticket to the Final Four.

North Carolina lost the doubles point for the first time all season, but played dominating tennis in singles to earn a spot in the NCAA Championship Final Four with a 4-1 victory over UCLA on Friday afternoon at the USTA National Campus.

North Carolina (33-1) makes its third appearance in the Final Four, joining the 2010 and 2014 teams. The win was also the first in four tries for the Tar Heels over the Bruins in postseason play.

Carolina will play Saturday at 2 p.m. against either Stanford or Pepperdine.

Carolina had its 34-match winning streak that started back in 2018 come to a stop at the hands of the Bruins, who featured three formidable doubles tandems.

No. 11 Elysia Bolton and Jada Hart played well in posting an early 6-1 win on court two over Carolina’s No. 12 duo of Makenna Jones and Cameron Morra.

Carolina’s No. 2 ranked team of Jessie Aney and Alexa Graham struck back with a brilliant 6-3 win over No. 5 Gabby Andrews and Ayan Broomfield on court one. All eyes turned to court three to decide the opening point.

Carolina’s Sara Daavettila and Alle Sanford led 5-4 over No. 82 Abi Altick and Taylor Johnson, however, the match moved to a tiebreaker that ultimately went to UCLA by an 8-6 margin. Carolina’s third team was a perfect 6-0 in the postseason entering Friday’s quarterfinal.

Sanford continued her good form with a 6-1, 6-0, victory over Andrews on court six. The Westerville, Ohio, product improved to 6-1 in singles since March 31.

No. 46 Morra, the ACC’s Freshman of the Year, quickly gave Carolina its first lead of the match by virtue of a 6-2, 6-3, victory over Miller on court four. Morra has won her last nine singles decisions going back to March 24.

The momentum continued to play into the hands of the No. 1 ranked Tar Heels.

No. 7 Graham overcame a massive deficit in the second set, but rallied for a straight set, 6-2, 6-4 win over No. 32 Bolton, the Pac-12 Freshman/Newcomer of the Year award winner, to make it 3-1 Heels. Graham, who suffered a rare defeat last time out against Oklahoma State, improved to 24-2 in duals.

No. 20 Daavettila sowed up the win on court three by holding off Broomfield, 6-2, 6-3, who was unable to return a forehand during the final point that set off a massive celebration. Daavettila lifted two hands in the air to punctuate her win. Seconds later, Graham leaped into her arms with their teammates running closely behind in pursuit.