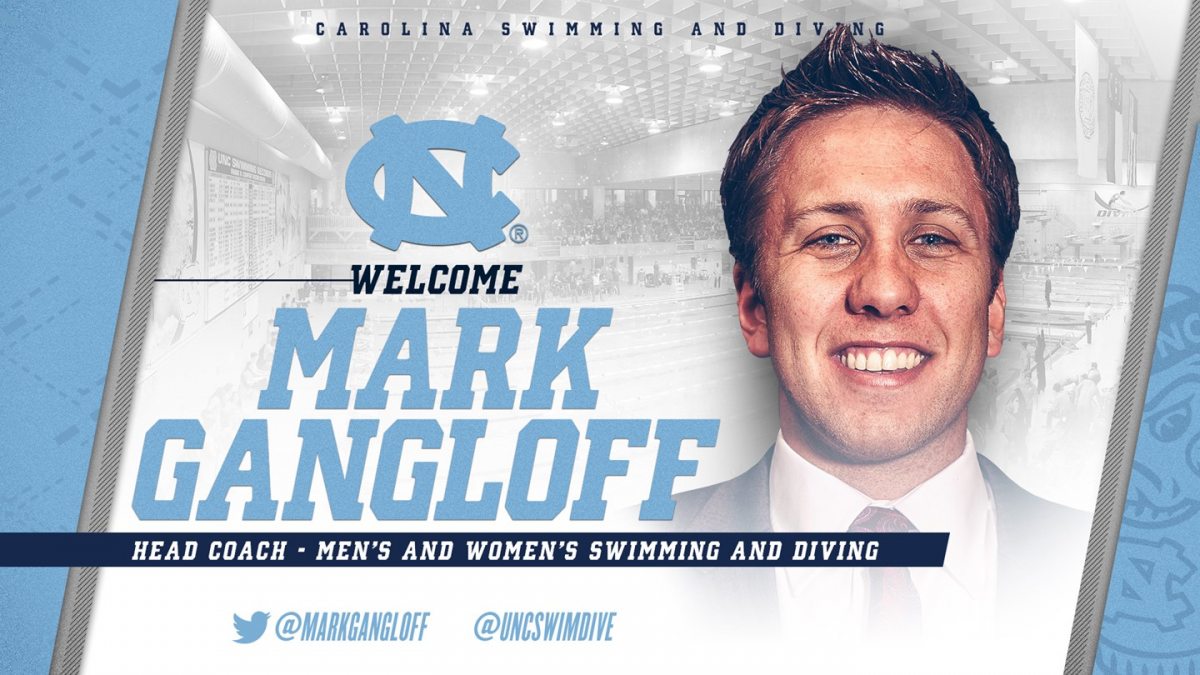 Mark Gangloff, a two-time Olympic gold medalist and one of the most dynamic young leaders in the world of collegiate swimming, has been named the new head coach for the men’s and women’s swimming and diving programs at the University of North Carolina. Gangloff comes to Carolina after seven years at the University of Missouri where he served as the Tigers’ associate head coach for the last two seasons.

“Mark Gangloff is greatly respected in international and collegiate swimming and diving and has a passion for coaching and developing student-athletes,” said Director of Athletics Bubba Cunningham. “His swimmers have demonstrated improvement and success, and he is known for his ability to relate with and motivate student-athletes.

“He’s an Olympic gold medalist, captained a national championship-winning team at Auburn and a number of USA Swimming teams in international competitions, and has developed swimmers at Missouri for the past seven years. We look forward to Mark taking our men’s and women’s programs to another level in the years to come.”

“I would like to thank Mr. Cunningham for the opportunity to serve the University of North Carolina as head swimming and diving coach,” said Gangloff. “I am grateful to those coaches, support staff and athletes who have come before me and look forward to honoring them through my work. Building on recent individual successes and a rich history of program excellence, I can’t wait to lead UNC swimming and diving to new heights. The culture of academic and athletic excellence at the University of North Carolina is second to none. I am excited to work with current and future Tar Heel swimmers and divers to achieve their academic and athletic dreams.

“I would also like to thank the University of Missouri, its tremendous coaches, and its administration for helping me to grow as both an individual and as a coach.

In his seven years at Mizzou, Gangloff led the Tigers to five top-15 finishes at both the men’s and women’s NCAA Championships. The Tiger men posted back-to-back top-10 NCAA results in 2016 and 2017, with the 2016 team finishing a program-best eighth nationally and Fabian Schwingenschlogl winning the first NCAA title in school history in the 100 breaststroke. That same year the Tiger women also had an all-time best team finish, placing 11th overall.

Before his time at Missouri, Gangloff spent three years a volunteer assistant coach at Auburn, his alma mater. During his time on the Auburn coaching staff, he assisted with stroke technique, race strategy and strength and conditioning.

From 2007-09, Gangloff coached at Swim MAC Carolina in Charlotte, North Carolina, where he assisted in the development and implementation of program and training design. He also provided instruction on race strategy and post-race coaching for swimmers ages 10-18.

As a collegiate swimmer at Auburn, Gangloff helped the Tigers to NCAA team titles in 2003 and 2004 and four straight SEC team titles. Individually, Gangloff earned 12 total All-America honors and won SEC titles in the 100 and 200 breast and the 200 and 400 medley relays.

A native of Akron, Ohio, Gangloff earned a degree in criminology from Auburn in 2005. He and his wife Ashley, a former national champion diver at Auburn, have three daughters, Annabelle, Hattie Rose and Kathryn.