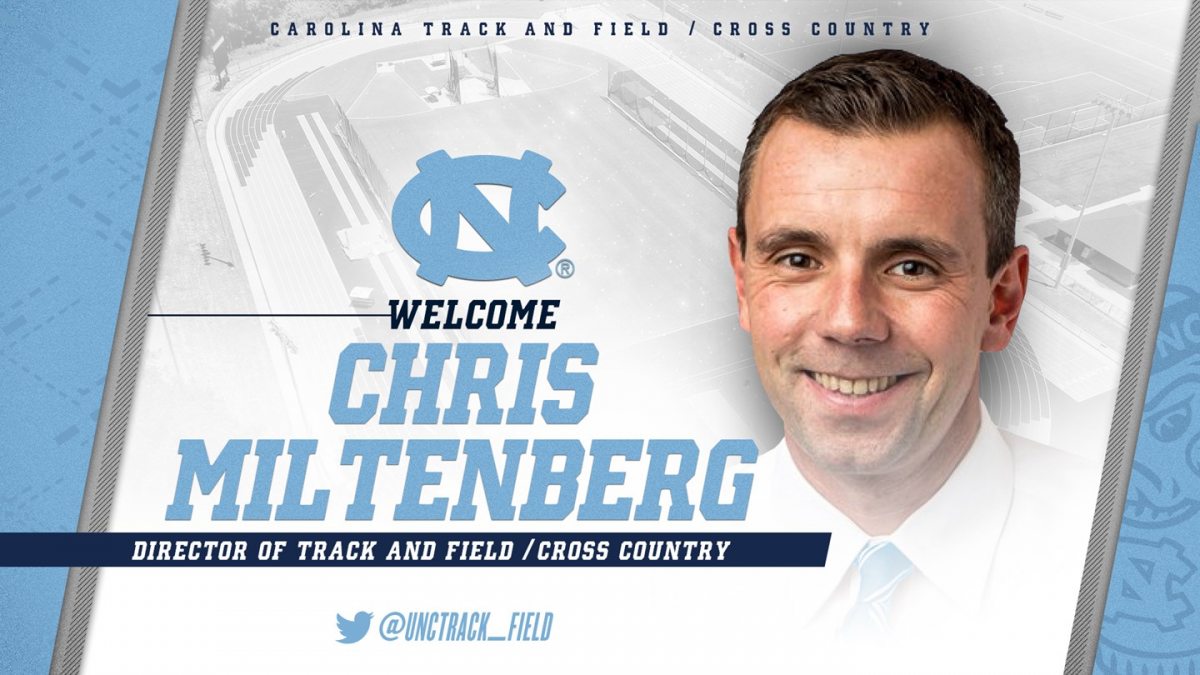 The University of North Carolina at Chapel Hill has named Chris Miltenberg, who has served as director of track and field and cross country at Stanford University the past seven years, to that same position.

Under Miltenberg’s leadership, the United States Track and Field and Cross Country Coaches Association named Stanford men’s track and field/cross country the John McDonnell Division I Program of the Year in 2019. The USTFCCCA named the women’s teams the Terry Crawford Division I Program of the Year in 2018. These are awarded to the most outstanding cross country/track and field programs that achieved the most success in a given year and are based on a school’s finish in the NCAA Championships in those three sports.

“Chris has a proven record of building track and field and cross country programs into national contenders, and his dedication to student-athlete success goes well beyond competition,” said Director of Athletics Bubba Cunningham. “He knows how to inspire, motivate, teach and lead, and he will be an outstanding addition to our family of champion coaches, our department and our University.”

He led the Hoyas to an NCAA women’s cross country championship in 2011 and was named the 2011 National Coach of the Year.

“I want to start off by thanking Stanford, Bernard Muir and Patrick Dunkley for taking a chance on me seven years ago and making me the youngest head coach in the country,” Miltenberg said. “Their belief in me and mentorship during my time at Stanford is how I’ve developed into the coach and leader I am today and I will be forever grateful for that. Most of all, I want to thank the incredible student-athletes I had the opportunity to work with at Stanford. They have impacted me in a way that changed my life.

“I am extremely excited to lead Carolina Track and Field/Cross Country into the next era of its great history. Carolina is a truly special place unlike any other in the country and the potential for this program is enormous. I knew it would take somewhere very special for me to leave Stanford and in all my conversations with Bubba leading up to this decision, it became clear that Carolina was the place that we could build one of the very best programs in the country with outstanding student-athletes, great support and a clear vision of the road to excellence. I really want to thank Bubba for this opportunity and the incredible vision we both have for the future of Carolina Track and Field/Cross Country. My family and I are so excited to join the Carolina family. Most of all, we have a lot of work to do and I’m fired up to get started.”

Stanford had nine NCAA top-five finishes in cross country (five consecutive for the men from 2014-18) and a dozen NCAA top-10 performances in track and field during his tenure. The men’s fourth-place finish at the 2019 NCAA Indoor T&F Championship was Stanford’s highest since 2007; the men’s fifth-place effort at the 2019 NCAA Outdoor T&F Championship was the school’s best since 2001; and the women’s third-place showing outdoors in 2018 was just two points out of first place and was the Cardinal’s best since 1984.

The Cardinal won the Pac-12 men’s cross country title in 2017 and 2018, earning him conference coach-of-the-year honors in both seasons.

At Georgetown, in addition to winning the national title in 2011, the Hoyas were fourth at nationals in cross country in 2010 and won a Big East women’s indoor track and field title in 2012.

Miltenberg is a 2003 graduate of Georgetown. He earned a master’s in applied psychology from Columbia in 2005. He captained the Hoyas’ track and field/cross country team for two seasons, was a two-time All-America and three-time Academic All-America. He placed fourth in the NCAA Championship in the 3000 meters and distance medley relay in 2001, was Big East champion in the indoor mile that year and led the Hoyas to four Big East titles.

The Huntington, New York, native is married to the former Colleen Kelly, who earned All-America track honors at Georgetown. They have four children – Annie, Cailtlin, Kevin and Maggie.