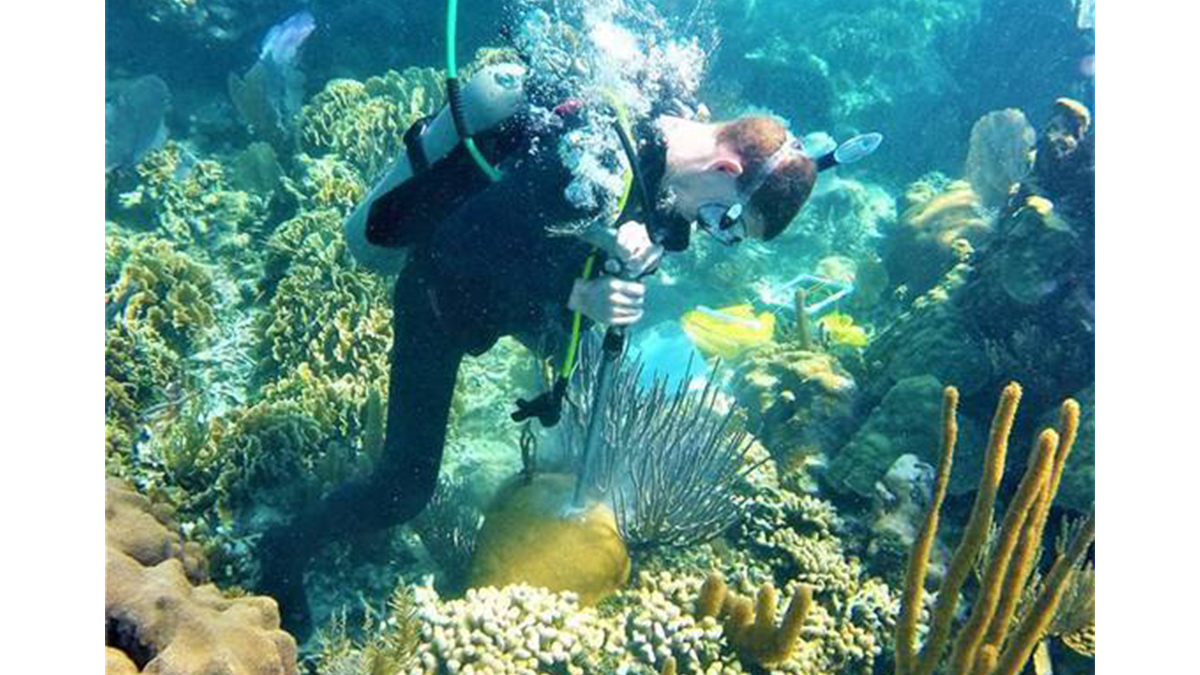 Coral reefs are a critical source of food, income and storm protection for millions of people worldwide. Nearshore corals grow in warmer and more nutrient-rich waters than their offshore counterparts and, because of their warmer temperatures, are believed to give a glimpse into the coral reefs of the future. This growth decline leads researchers to believe that any previous environmental advantage that came from corals being located closer to shore has now diminished. This is likely due to climate change and human activities, like coastal development that introduces excess sediment and nutrients to the water, subjecting corals close to shore to higher levels of stress. The findings also suggest that over time climate change will slow the growth of nearshore and offshore corals throughout the world.

“This research leaves us with troubling questions, like whether or not corals will be able to adapt to future conditions, and, if not, how that will impact the health and well-being of the millions of people around the world who rely on reefs for their food, income and protection from storms,” said Justin Baumann, a postdoctoral researcher in marine sciences and biology at the University of North Carolina at Chapel Hill. “Since we don’t know the answer to these questions, it remains crucial that we carefully manage and protect reefs so that they will have the best possible chance to acclimate, adapt, and, hopefully, survive the impacts of climate change.”

Baumann is the lead author of the paper, which was published in Global Change Biology on Aug. 28.

The research team looked at the relationship between growth rates and specific acute stress events, such as coral bleaching. Coral bleaching happens when corals become stressed by pollution or increased ocean temperature and the colorful algae living inside of coral tissue are expelled, causing the coral to turn white. They found that while coral bleaching events can slow the growth of coral, the long-term declines in nearshore coral growth appear to be driven by the chronic stress of rising water temperatures due to climate change combined with increasing land-based stresses like development along the coast.

The study evaluated corals that were located along a 300-kilometer stretch of the Belize portion of the Mesoamerican Barrier Reef System. The nearshore coral reefs were within 10 kilometers of Belize’s coast and the offshore coral reefs were 30-60 kilometers away from mainland Belize. Scuba divers collected 124 coral core samples for the study. A coral’s core has growth bands that show its age, similar to the rings on a tree. The cores were taken from 19 sites, providing a sample size large enough to represent the entire reef system.

In the lab, the research team performed CT scans on the cores to measure the yearly vertical growth rate of the coral skeletons for each core. Reefs that have lower vertical growth rates are expected to be less diverse and complex. They also offer less protection to the shoreline and provide less area for fish and other invertebrates to live. The extent to which these reef changes will harm the communities that rely on them for food, income and protection against storms is yet to be seen.

“Local action to mitigate stress from coastal development and global action to reduce greenhouse gas emissions will both be necessary to ensure a sustainable future for both nearshore and offshore coral reefs,” said Baumann.