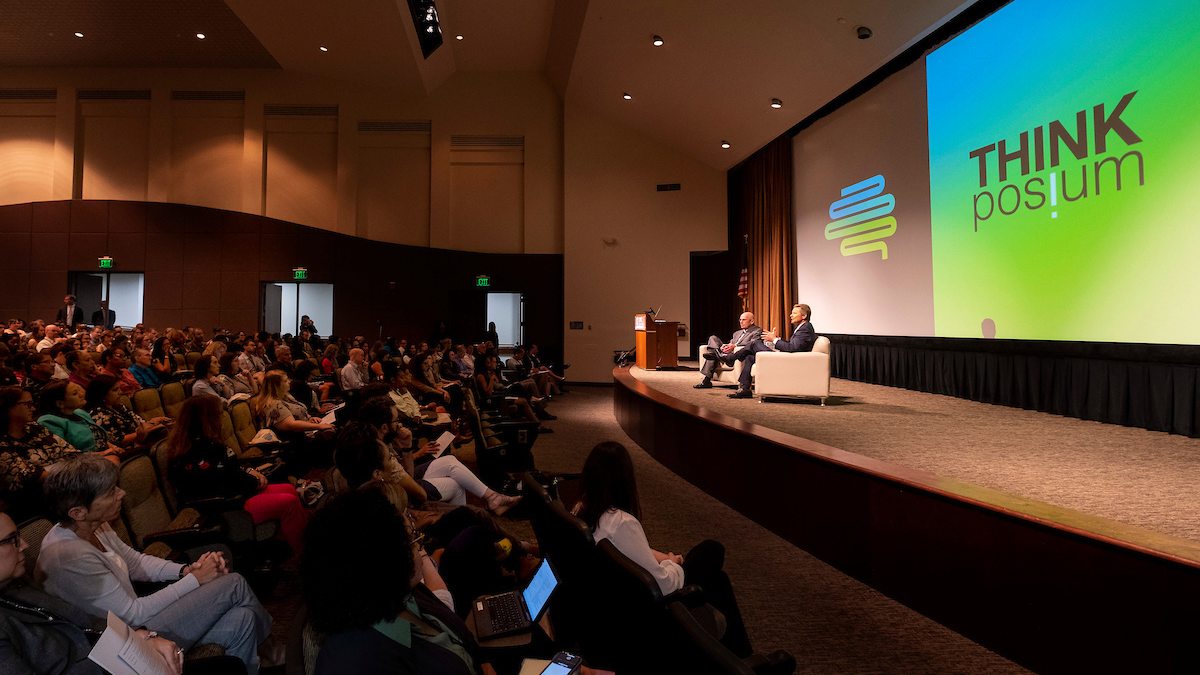 Using one’s voice — in everyday conversations, personal and professional, or by providing input to a strategic plan — is a powerful way to build community and change society, as 360 faculty, staff, students and campus leaders experienced Sept. 4 at the University’s seventh annual THINKposium.

Voice was the theme of this event organized by the University Office for Diversity and Inclusion, where participants talked through diversity, equity and inclusion issues and solutions in interactive workshops and discussions about speaking up and encouraging others to do the same.

The day’s two panels were upbeat discussions about the importance of not making assumptions (“THINK before you SPEAK!”) and of sharing personal experiences and perspectives with others (“Alexa: What are the ways I can use my voice to effectuate change?”)

“Assumptions do a disservice,” said panelist Shahnaz Khawaja in the THINK before you SPEAK discussion. “Reach out and inquire in gentle ways if you want to know about a person’s situation,” added the assistant director for resiliency and recovery strategies in the Office of Student Wellness.

Those who do make assumptions, especially ones based on appearance, find themselves in awkward situations. Ask panelist Terri Phoenix, director of Carolina’s LGBTQ Center, whom people sometimes assume is a woman.

Phoenix said that he often gets what he calls a “Ma’am Sir Ma’am sandwich” when ordering food at restaurant counters and in other interactions with people.

One way to head off these assumptions is to become more aware of people’s different life experiences. Panelists in the discussion about effectuating change emphasized the importance of sharing personal stories and perspectives, especially when they are underrepresented.

“Those different aspects make you human and your voice stronger,” said Chastan Swain, law student and president of the Graduate and Professional Student Federation, who talked about growing up on a tobacco farm in western North Carolina and identifying as queer.

Sharon Holland, the Townsend Ludington Distinguished Professor in American Studies and Women’s and Gender Studies, shared that being an outspoken black woman can have negative effects on her life, but that she’s found ways to cope. Sophomore Hannah Starling talked about being a Native American, one of only three in a 1,300-student high school.

“Your voice is just as important as the person’s across the room from you, so live your life, speak your voice,” Starling said.

Although participants encouraged each other and talked about how voice can build community and change society, the keynote speech showed terrible things can happen when people do not recognize others as being equally important. Speaker Maria Armoudian, a former journalist and now a senior lecturer at the University of Auckland in New Zealand, described the dire consequences when certain voices are stifled and other voices dominate the airwaves.

“The belief in an evil ‘other’ as a danger and polarizing language from leaders and media can lead to codified separation of groups and mass violence,” she said. She has documented what happened when sociopolitical conditions and media messages contributed to the silencing of voices of people perceived as different and resulted in genocide in Rwanda, Bosnia and Nazi-held Europe.

Armoudian, who hosts and produces the radio program, The Scholars’ Circle, said that an “us vs. them” mindset blames one group for problems that they did not alone cause.

“It evokes group anger, which has an automatic tendency to punish, attack and respond,” she said. “You see this in certain types of media and it’s not true.”

In a joint discussion later in the day, Interim Chancellor Kevin M. Guskiewicz and Executive Vice Chancellor and Provost Robert A. Blouin talked about how they want to use the power of voice to bring the community together and help develop the next phase of the University’s strategic plan.

“We’re trying to make sure that the language we use is truly inclusive language that speaks to everybody on this campus,” Blouin said of the plan, which will be unveiled in early October. “It’s not for just a small minority of individual faculty, but rather speaks to all different groups, all different constituencies across the campus.”

Guskiewicz noted that it’s no mistake that the strategic plan’s first priority is “Build our community together.” That goal is integral to the University’s culture of collaboration.

“We won’t become the leading, global, public research university if we don’t have a sense of community and one in which diversity and inclusion are appreciated,” he said.

To show his commitment to diversity, Guskiewicz told the group that University leadership is restructuring the University Office for Diversity and Inclusion and that a new History, Race and Reckoning Commission will expand on the work of the History Task Force to ensure that University history is viewed from more than one perspective.

In afternoon training sessions, participants also learned how to use their voices to help when they find themselves bystanders of incidents where someone is being hurt, abused, assaulted or silenced.

Gretchen C. Bellamy, senior director for education, operations and initiatives in the University Office for Diversity and Inclusion, both opened and closed the day’s event.

“It was an invigorating, heavy, challenge-filled and enlightening day where we learned to better use our voices and to ‘pass the mic’ to others,” she said.