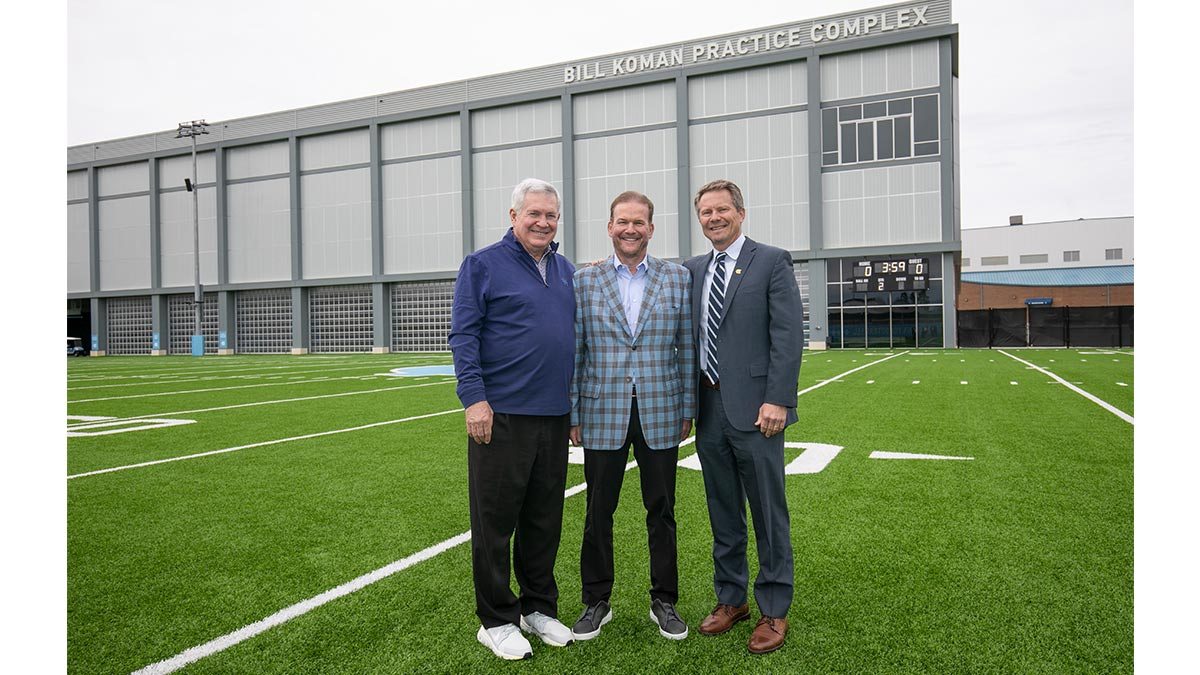 The University of North Carolina Department of Athletics and The Rams Club announced on Thursday a $15 million gift to support a new Carolina football initiative for student-athletes’ lifelong success and to name its new practice complex, positioning the team and its players for victory on and off the field.

The gift from Jim and Jennifer Koman of St. Louis will honor Jim’s father in two ways that are important to the family. The Bill Koman Game Plan for Success is a comprehensive development program that will prepare Carolina football players for life after graduation, and Carolina’s new practice complex will be named the Bill Koman Practice Complex. Jim Koman’s late father, William J. “Bill” Koman Sr., was a 1956 Carolina graduate who played football for the Tar Heels and later in the NFL.

“Jim and Jennifer believe in the ability of athletic competition to prepare young people for productive and meaningful lives and careers,” said director of athletics Bubba Cunningham. “Their commitment to teaching life lessons through athletics will have an enormous impact on our football program and all our student-athletes. We are so appreciative of Jennifer and Jim for their dedication to Carolina.”

The Bill Koman Game Plan for Success will provide training and support for Carolina football student-athletes throughout their time at Carolina and into their post-graduate lives. Programming will center around preparing student-athletes for their college career and beyond through academic assessment, study and learning skills preparation, leadership development, community involvement and career opportunities.

“I’m thrilled that Jim and Jennifer have so generously chosen to recognize Bill by creating a program that will impact our young men for the rest of their lives,” said football head coach Mack Brown. “We often say that coming to Carolina is a 40-year decision, not a 4-year decision, and this gift and program, coming from a Carolina football player and his wife in honor of his Carolina football father, show how true that statement is. Part of our mission as a football program is to ensure that we’re giving our young men the tools to go on and be productive husbands, fathers and citizens when their time in college comes to an end. With this program, we’ll be able to take that commitment to another level, and it will be of great benefit to our current and future student-athletes.”

The Bill Koman Practice Complex features an indoor facility with a 120-yard synthetic turf field and spaces for strength-and-conditioning training and sports medicine. Additionally, two 120-yard outdoor fields, one synthetic turf and the other natural grass, are adjacent to the indoor facility. While the Bill Koman Practice Complex is the practice home for Carolina football, the facility serves other teams and intramural athletes as well.

“Jim and Jennifer Koman’s generosity will enable our Tar Heel student-athletes to take advantage of every facet of Carolina’s uniquely student-centered experience,” said Chancellor Kevin M. Guskiewicz. “This gift will empower us to further integrate Carolina’s strengths in academics, athletics, professional development and community involvement to better serve our students, our state, our nation and the world. It is a truly meaningful way to honor the legacy of Bill Koman and we are deeply grateful for it.”