During his installation ceremony on Sunday, Chancellor Kevin M. Guskiewicz will be presented with a symbol of Carolina leadership past and present.

The chancellor’s medallion features the University’s seal and motto, “Lux, Libertas,” meaning “Light and Liberty.” It was a 1993 gift honoring the University’s bicentennial, donated by John Sanders, who at the time was professor emeritus and director of the Institute of Government, now called the UNC School of Government. While the medallion originally hung by a hand-woven white ribbon, 20 years of wear necessitated a replacement. In 2013, a sterling silver chain was commissioned to suspend the medallion for former Chancellor Carol Folt’s installation ceremony. 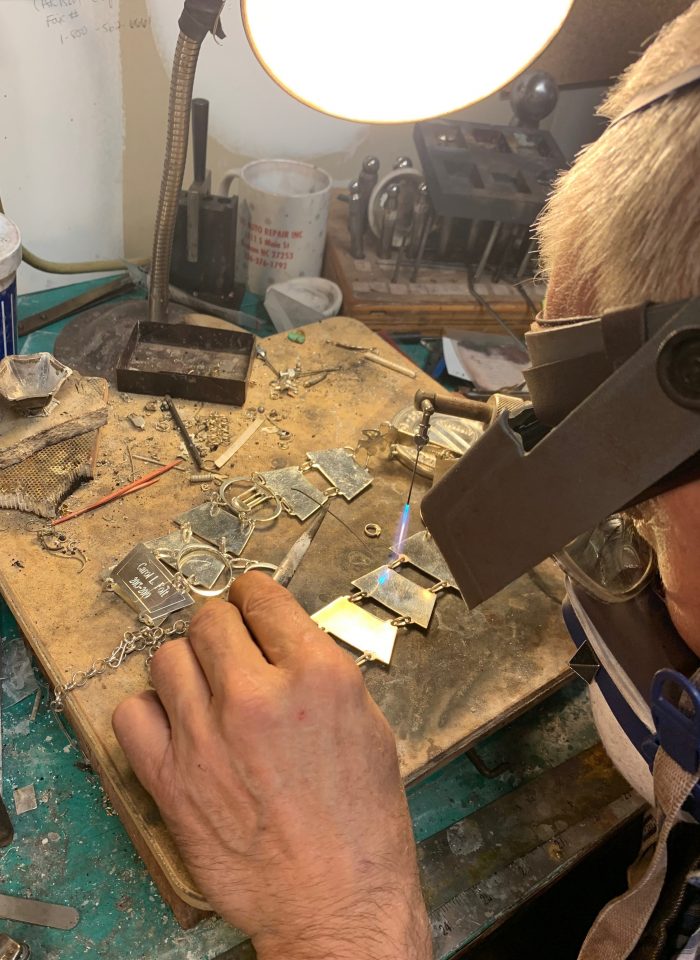 A silversmith adds Chancellor Kevin M. Guskiewicz’s name and beginning date of service to the medallion.

To add Guskiewicz’s name to the chain for the ceremony, the University commissioned Wentworth and Sloan Jewelers, the Chapel Hill business that designed the original chain. Established in 1945, the shop historically sells Carolina jewelry and gifts, which made it well-suited to the task of creating a piece that represents the University.

Although his name is the 12th listed on the chain, Guskiewicz is only the seventh chancellor to be presented with the medallion and the second to wear it hanging from the chain of office. The medallion was first presented to Paul Hardin III in 1993 when it was donated to the University. After that, it went to Michael Hooker, who served as chancellor from 1995-1999, William McCoy (1999-2000), James Moeser (2000-2008), Holden Thorp (2008-2013) and Carol Folt (2013-2019). Folt is the only previous chancellor to wear the chain of office.

The presentation of the medallion this year will differ from the six previous ceremonies. Typically, the medallion is placed around the incoming chancellor’s neck by the president of the University of North Carolina system during the ceremony, and the chancellor then wears the medallion for formal ceremonies such as convocation. That tradition will be modified this year due to community standards of social distancing. Instead, Guskiewicz’s wife, Amy, will present her husband with the medallion and place it around his neck.

After the installation ceremony concludes, the medallion will return to its permanent home in the North Carolina Collection Gallery of Louis Round Wilson Library, until the medallion is once again called into use to mark another chapter in Carolina’s history.

Read more stories on faculty and staff at TheWell.unc.edu