For decades, the Morehead Planetarium and Science Center has been bringing the stars and cosmos to North Carolinians.

But on July 12, for the first time, space came to Morehead. 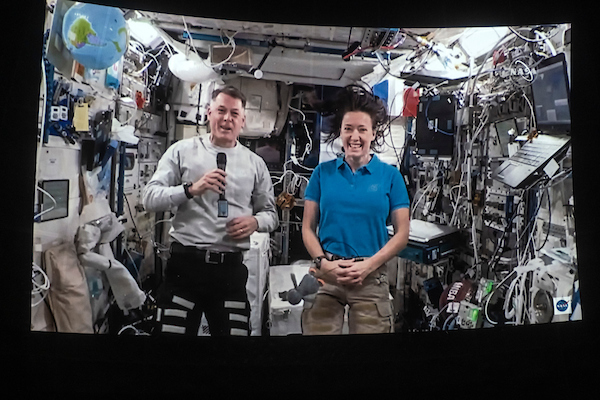 The questions were prerecorded by children at Morehead’s Chapel Hill camps and other summer programs throughout North Carolina, and NASA then streamed the astronauts’ live answers over YouTube. Morehead projected the livestream inside its 68-foot planetarium dome.

“Providing rich experiences like this is a core part of our purpose and mission,” said Todd Boyette, director of Morehead. “We are excited to partner with NASA to give our students the opportunity to connect with real-life astronauts and experience the wonder of space.”

Monday’s downlink was just the most recent connection between the planetarium and NASA. The two organizations have a long partnership that began with astronaut training programs in the 1960s and 1970s. Since then, Morehead has collaborated with the agency to develop planetarium shows, support the research of NASA-funded scientists and bring astronauts to North Carolina for special appearances.

“Working with NASA always feels like an opportunity to honor our roots as a planetarium and as a place where people can learn about the stars and beyond,” Boyette said.

Boyette hoped the opportunity to hear directly from McArthur and Kimbrough showed the campers that astronauts are regular people and that a space career is attainable.

“A place like Morehead wants to provide those types of connections,” he said.

The experience did just that for Aida Despirito of Chapel Hill. The 13-year-old camper said she was most interested in hearing how McArthur and Kimbrough became astronauts and the kinds of science and math skills needed for the job.

“It gave me a different perspective for sure,” she said.

Penelope Farris, a 10-year-old from Pittsboro who was attending camp at Morehead, was excited to learn more about the astronauts’ six-hour spacewalks and the experiments they’re conducting on the International Space Station.

“It was pretty cool. I got to watch them doing what they would normally do,” Farris said. “I just thought that was really cool because you got to see what it looks like.”

Right before the downlink, Amy Sayle, an educator at Morehead, showed the campers inside the planetarium exactly how to spot the International Space Station in the night sky. After seeing what life in the space station looks like, Aida and Penelope both said they plan to look up tonight to catch another glimpse of the International Space Station flying 250 miles above the Earth.

Watch a replay of the downlink