Robert Layton was only 7 years old when the World Trade Center towers collapsed on Sept. 11, 2001. But the driver operator from the Carrboro Fire Department still feels the weight of that day 20 years later.

“The fire service is one big family. The guys we lost that day, we may not have had any personal connection with them, but they’re our brothers,” he said. “We hurt when they died just like everybody else.” 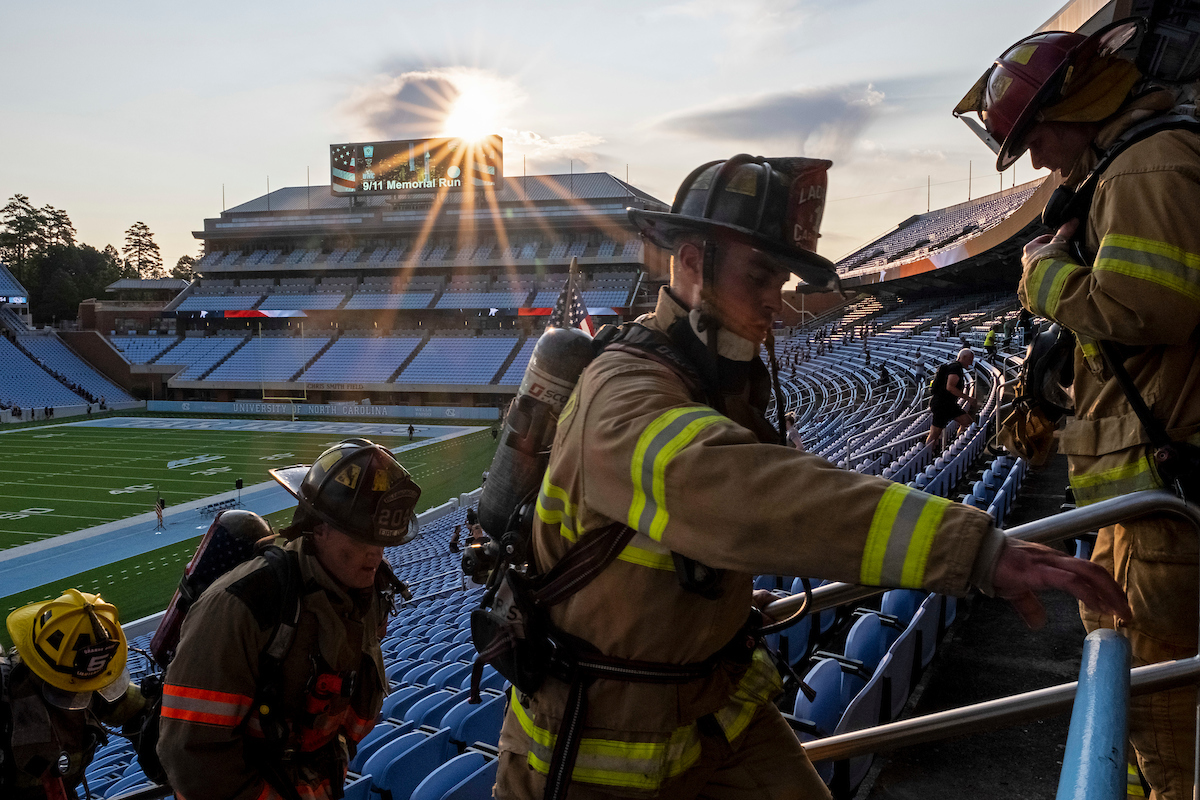 Local firefighters climb stairs in Kenan Stadium to to pay their respects to the victims of the Sept. 11 terrorist attacks. (Jon Gardiner/UNC-Chapel Hill)

Layton — decked out in his firefighter gear — was among the several hundred community members that gathered in Kenan Stadium on Saturday morning to pay their respects to the victims of the Sept. 11 terrorist attacks.

Hosted by Carolina’s Army ROTC, the 9/11 Memorial Run has become a yearly tradition in Kenan Stadium. During the early morning event, participants climbed 2,076 steps — the total number of stairs in the World Trade Center towers.

“On Sept. 11, 2001, many of us were babies or perhaps not even born yet, but that doesn’t diminish our understanding of the significance of the day our country came under attack,” said Sydney Downes, a Carolina senior and UNC Army ROTC cadet. “Today, on the 20th anniversary of that fateful day, we pay tribute to the nearly 3,000 innocent lives lost — the fathers, mothers, sons, daughters and friends who did not return home that night.”

The cadets were joined by their Air Force and Navy counterparts, as well as student-athletes, community groups, local first responders and members of the Duke University and North Carolina Central University ROTC.

Among the community members who joined the cadets on Saturday morning was Kirby Saunders, the director of emergency services for Orange County. Saunders was attending Jefferson College of Health Sciences in Roanoke, Virginia, when he first saw the news reports of the attacks. By Sept. 13, he was sifting through the rubble at ground zero in New York City. 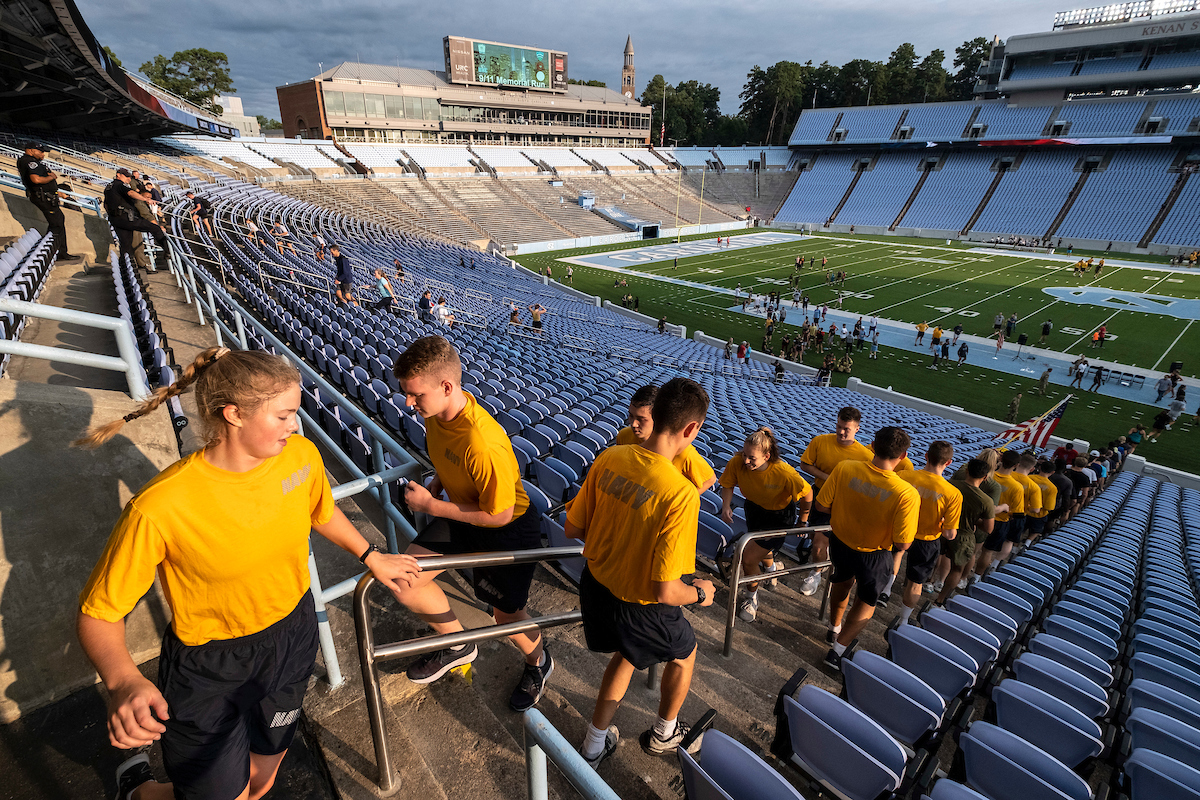 Saunders shared his story with the community members and Carolina students gathered for the run, reflecting on his 16-hour days in the wake of the attacks and taking breaks every 30 minutes to listen for people trapped under the collapse. Telling his story to younger generations, Saunders said, is his way to pay tribute to those lost.

“There is no greater way to remember the heroes who paid the ultimate sacrifice than to carry their memories forward,” he said.

On a college campus where many of the students were infants or not even born in 2001, continuing to pass down the experiences was a big reason Layton was climbing the stairs in Kenan Stadium.

“It’s hard to put into words the emotions that surrounded that day and still surround that day. The only thing that they have to remember it by is what they see on TV or what they see in a textbook,” he said. “To come out here and see the emotion on our face, and see why we do it, I think, gives them a better perspective of how it was.” 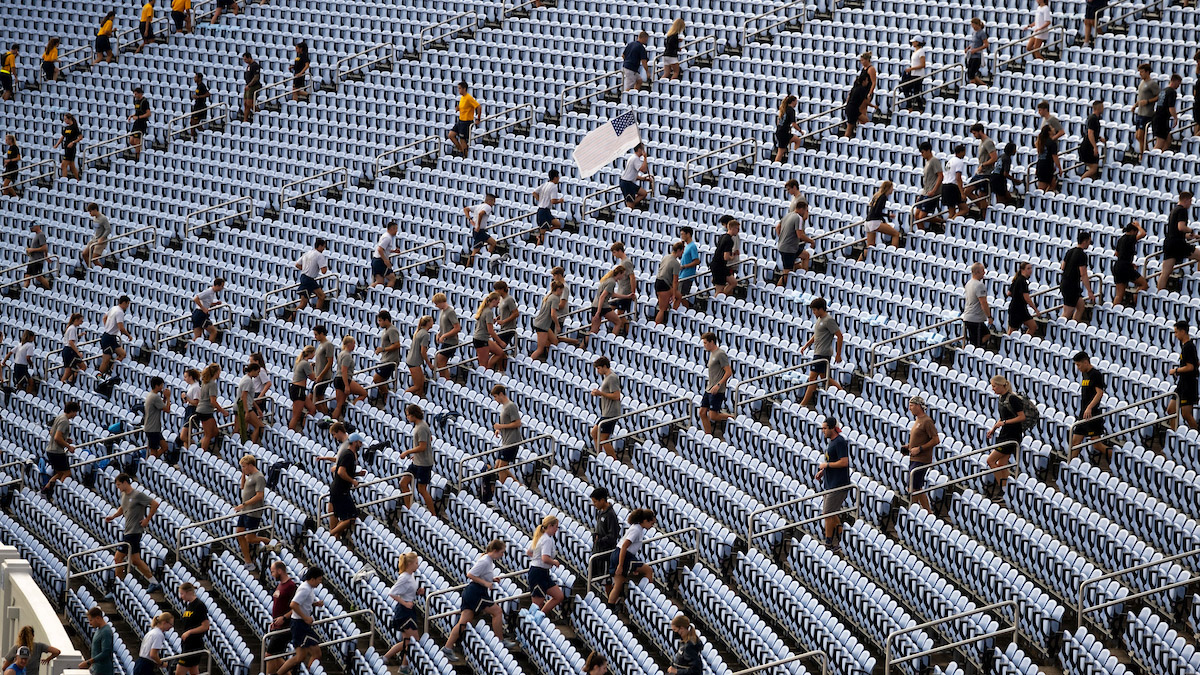 Even though Carolina junior and Army ROTC cadet Louis Harrison was just two months old during the terrorist attacks, it was important to him to pay his respects on Saturday. As a future Army officer, he will serve in a world that continues to be shaped by the events, he said.

“This is part of America’s foundation now,” he said. “Even if I wasn’t directly impacted, the impacts of 9/11 ripple throughout the country and throughout time.”

Before the run, Downes encouraged the runners to take the time to reflect on the events of Sept. 11 and the sacrifices made then — and still today — by first responders.

For Chapel Hill Fire Capt. Jeff Stevens, those sacrifices were on his mind with each step as he climbed the 110-flights of stairs, wearing his full turnout gear and carrying a firefighter’s ax. In his third year at the event, Stevens wanted to experience climbing 2,076 stairs the way first responders in New York would have.

“If we’re going to do it, I wanted to do it as they would have,” he said. “Every time I do it, I think about them in a stairwell, having no idea what they’re about to roll up on and having the adrenaline and exhaustion pumping.” 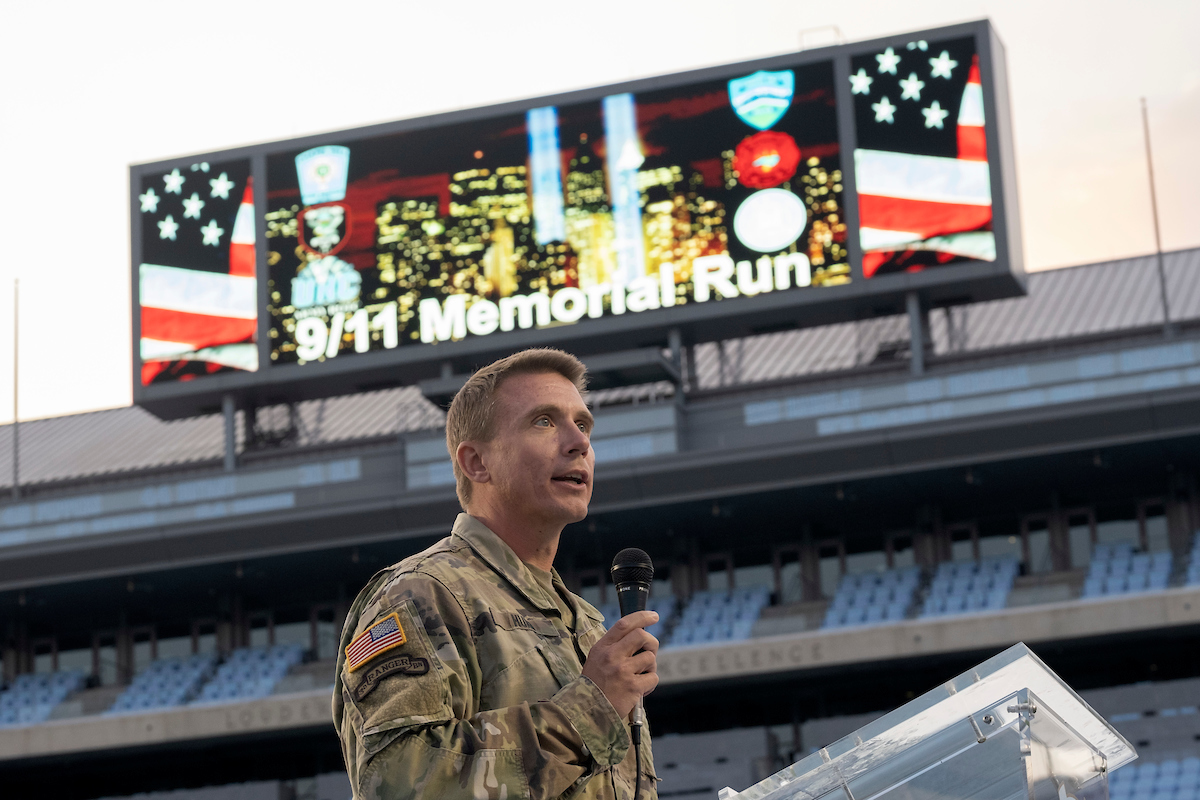 Seeing the first responders and community members out at Kenan Stadium was motivating for Lt. Col. Daniel Hurd, a professor of military science. Amidst the pandemic, Hurd and the Army ROTC continued its tradition last year with a smaller stair climb with just members of the unit.

He was excited to have the larger community back out with them this year.

“9/11 is about community. It’s about a shared purpose,” Hurd said. “We all come together through selfless service. There’s nothing more motivating than seeing your community come together.”