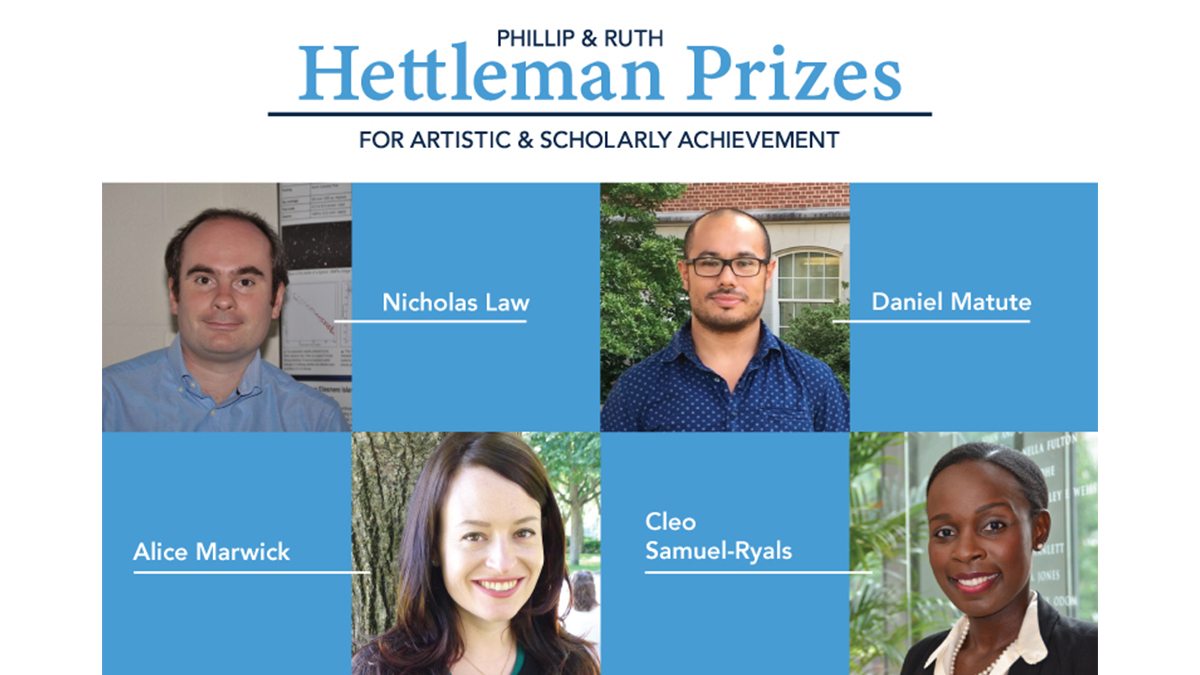 The annual Phillip and Ruth Hettleman Prizes for Artistic and Scholarly Achievement have been awarded to four associate professors who exemplify groundbreaking and innovative research along with future career promise.

The late Phillip Hettleman, a member of the Carolina class of 1921, and his wife Ruth established the prestigious award in 1986 to recognize the achievements of outstanding junior faculty. The recipients of the $5,000 prize were recognized at the Sept. 3 Faculty Council Meeting, and each will deliver a virtual presentation on their research during University Research Week.

Nicholas Law researches exoplanets, planets that orbit stars other than our sun. He is an astronomer of international prominence who searches for the most promising homes of alien life by designing and building entirely new classes of telescopes to explore the skies. His group built and deployed the Evryscopes, the first gigapixel-scale telescopes able to capture images of the entire visible sky every few minutes. He also deployed the first terrestrial instrument capable of producing higher resolution images than the Hubble Space Telescope, and the first High-Arctic telescope near the North Pole. Law is now designing the Argus Array, which is planned to use new cost-reducing technologies to become one of the world’s largest telescopes, allowing for the first exploration of the entire deep sky at high speed.

“Dr. Law is a star, and he has excelled at every stage of his academic career,” said Christian Iliadis, former chair of the physics and astronomy department. “He is an exceptional young scientist who has made several groundbreaking contributions to a central challenge facing humanity — the search for life beyond Earth.”

Law has a prodigious research record, with a total of 160 publications in top academic journals and over 8500 citations. Since joining Carolina, he has published 101 papers and has won almost every type of NSF and NASA grant available in his fields, a total of $3.6 million as principal investigator.

Law received his doctorate in astronomy from the University of Cambridge, UK, and undertook postdoctoral training at Caltech and University of Toronto.

Alice Marwick is a qualitative communications scholar who uses ethnographic and critical methods to analyze the sociocultural impact of popular digital technologies. She has a three-pronged approach to her study of social media: understanding identity presentation in online environments; the implications of social media for individual and collective privacy; and disinformation and its challenges to media practices, democracy, and social stability. Additionally, she is a principal researcher and co-founder of the UNC Center for Information, Technology and Public Life. The center looks at the intersection between democracy and emerging technologies and was founded by a $5 million grant from the Knight Foundation in addition to a $5 million match from UNC-Chapel Hill and $800K from the Luminate Group to support the Center, all awarded to Marwick and three co-PIs.

In her nomination of Marwick for the prize, Department of Communication Professor and Chair Patricia Parker noted that “she has a truly impressive record of groundbreaking scholarship that has secured her status as one of the leading scholars, not just in the United States, but internationally, on the impacts of social media.”

Marwick received her doctorate from New York University in media, culture, and communication. Additionally, she holds a master’s in communication from the University of Washington and a bachelor’s in political science and women’s studies from Wellesley College.

Daniel Matute’s research explores evolutionary biology, namely how species become and remain distinct, through broad taxonomic sampling. To do so, he collects the genus Drosophila (small fruit flies) from their natural habitat in hybrid zones such as Praslin and La Digue in the Seychelles (known as the Galapagos of the Indian Ocean) and applies an arsenal of molecular, genetic, and genomic tools for evaluation. Matute bridges evolutionary theory with modern genomic analysis and is discovering novel patterns of introgression (gene transfer) in natural populations.

In the past five years, Matute has published 40 peer-reviewed papers, 31 of which as either the first, last, or sole author. In addition to his service to UNC-Chapel Hill, he has been a substantial contributor to his chief professional society, the Society for the Study of Evolution (SSE) where he served as an award committee member, and an elected councilor and chair of the diversity committee.

“His success reflects his willingness to take on informative, yet hard, projects in the field or in the lab,” said Kerry Bloom, Thad L. Beyle Distinguished Professor and chair of the Department of Biology. “I anticipate that his research program will continue to thrive and expand over the rest of his career.”

Matute earned his doctorate in ecology and evolution at the University of Chicago. He received his bachelor’s in biology and microbiology, with honors, from Universidad de Los Andes in Bogotá, Colombia.

Cleo A. Samuel-Ryals is a health services researcher whose research, teaching, and service activities demonstrate her steadfast commitment to racial justice and health equity. Her research foci include disentangling the multilevel sources (e.g., clinician bias, structural racism) of inequities in palliative and supportive cancer care and addressing such inequities through system-level approaches that leverage health informatics tools and community partnerships.

She is currently the principal investigator of Symptom and Healthcare Access Reporting and Evaluation (SHARE) for Supportive Care Equity, a five-year National Cancer Institute-funded study focused on understanding and addressing racial inequities in symptom management among patients with cancer. As part of the SHARE study, Samuel-Ryals and her team are analyzing data from the UNC Health Registry/Cancer Survivorship Cohort to inform the development of a novel electronic patient-reported outcome tool designed to routinely monitor symptoms and symptom-relevant health care access challenges during cancer treatment.

“Samuel-Ryals has a most impressive record of research funding, peer-reviewed publications, teaching, mentoring, and service,” said Morris Weinberger, Vergil N. Slee Distinguished Professor of Healthcare Quality Management and chair of the health and policy management department, and Stephanie Wheeler, professor of health policy and management and associate director of community outreach and engagement, Lineberger Comprehensive Cancer Center. “Her research will not only increase our understanding of health disparities but also guide the development of interventions that improve the lives of cancer patients.”

In 2019, Samuel-Ryals was honored as a 40 Under 40 Leader in Minority Health by the National Minority Quality Forum and Congressional Black Caucus. In 2020, she was appointed to serve on the National Cancer Policy Forum within the National Academies of Sciences, Engineering, and Medicine. Samuel-Ryals is also the Founding Director of the Centering Racial Equity in Data Science (CREDS) Initiative within the UNC Lineberger Cancer Outcomes Research Program.

Samuel-Ryals earned a doctorate in health policy from Harvard University. Additionally, she holds a bachelor’s in psychology from the University of Miami.