At this point, it’s a well-known story.

The pandemic hit the Americas in March 2020 and musicians’ gigs were canceled, quarantine began, and connection to others became more valued than ever before. For jazz professor Stephen Anderson, the pandemic also meant no studio time to record the next album with his band the Dominican Jazz Project. The fact that “Desde Lejos”, released in July 2021 and currently being considered for the Grammy ballot, was recorded, edited and published during the pandemic is a profound example of perseverance and ingenuity. 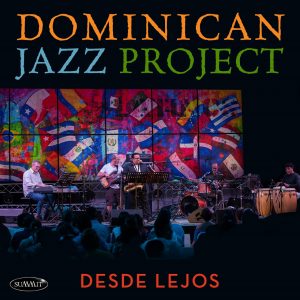 As their name suggests, many of the group’s members reside in the Dominican Republic. The isolation of the pandemic was a particularly disheartening blow for them as they had recorded their first album in 2016 and spent the next few years touring and giving masterclasses at universities across the North American continent. There their long-awaited return to the studio was going to be in 2020. Instead, they found themselves isolated from each other aside from WhatsApp – which is not conducive to music-making.

Then the group suffered another enormous loss, the death of their beloved friend and bassist Jeffry Eckels. After losing his mother suddenly in late May, as well as struggling both mentally and financially with the isolation of the pandemic, Jeffry took his life on July 3, 2020.

“As we did frequently, he called me to talk. He was struggling with the passing of his mother and with suddenly finding himself with no source of gigging income. He asked me if we could record his composition, Siempre Adelante, for the CD, and we started making plans for how he and I might record our parts together, socially distanced in the studio. I was excited about that, and then, suddenly without any warning, within a few weeks of that phone call, we received the tragic news that Jeffry had also passed away,” recounted Anderson.

“We were all in shock. I personally was devastated, as Jeffry was one of my closest friends and had been on almost every tour, project, and recording with me for the past 19 years. I composed the tune, ‘Sin Palabras,’ in honor of Jeffry out of pure emotion in the days following the news of his death.”

“Sin palabras” translates to “without words” or “at a loss for words.” This was an emotion that would repeat later that summer when saxophonist Sandy Gabriel lost his father, and respected Dominican musician, Sócrates Gabriel, in August 2020.

The group was mourning tremendous losses and the continuing challenge of being isolated from one another. Amidst these profound losses, they began to gain energy and momentum from a new addition to the ensemble.

“We were excited that the renowned Cuban bassist, Ramon Vázquez Martirena (who resides in Puerto Rico and tours with Chucho Valdés) agreed to join our group for the recording. Yet when the time came for Ramon to record his parts, his mother became severely ill, and he needed to be with her in the hospital during that time,” remembered Anderson. “Eventually, Ramon contributed six tracks to the recording, and we invited friends of Jeffry — bassists Craig Butterfield and Jason Foureman — to also record with us.”

Recording separately created yet another set of challenges for the musicians. Jazz is an incredibly collaborative genre with individuals taking turns to solo on the tracks. Having to recreate this environment in an authentic manner while recording solo at home took many hours of post-production and enormous talent from each member and guest artist of the group.

“[It] really was a bit challenging, because we had to imagine the interaction,” said Vázquez Martirena. “Recording from a distance has pros and cons. Pros are that we can repeat and repeat if there is something we don’t like. Cons are no interaction, hard to create natural dynamics – following the soloist, piano or forte with the rhythm section, etc.”

But as for many, perseverance became DJP’s mantra. And while the recording brought technical and musical challenges, it also meant more time in connection with each other over text, phone, and video calls.

“For me personally, having almost daily contact with these dear friends in the group gave me optimism and hope as we worked on the recording together throughout the pandemic (March 2020 to April 2021),” said Anderson. “They are all beautiful human beings in addition to being great performers.”

Listeners who know the backstory of this album will be astonished at the cohesive sound and pure emotions that emanate from every track. While it may have been recorded from afar, there is nothing distant about this music. Instead, it offers listeners a front-row seat to a show that feels incredibly intimate and expansive from the first note.

The album is already receiving acclaim from both critics and audiences, and has been nominated for three Grammy Awards: Best Latin Jazz Album, Best Instrumental Composition (Stephen Anderson) for “Un Cambio de Ritmo,” and Best Improvised Jazz Solo (Rahsaan Barber) on “Ritmos de Bani.” They hope to make it to the official ballot this month.

“For [non-musicains], this is not a difficult listen because of the melodies and solid rhythms, which are almost danceable, many times,” said Vázquez Martirena. “For students or jazz scholars, this is a unique album that will pass on for generations because of the geniality of the fusion.”

Anderson ends his liner notes for the album with a simple wish for the listener.

“We hope you will enjoy the recording as much as we enjoyed the process of making music together, albeit Desde Lejos — from the Dominican Republic, Puerto Rico, Cuba, North Carolina and South Carolina.”

Listen to the album