The campus community gathered at the Carolina Alumni Memorial in Memory of Those Lost in Military Service outside of Memorial Hall on Nov. 11 to commemorate Veterans Day and pay tribute to the men and women who have served in the United States military. 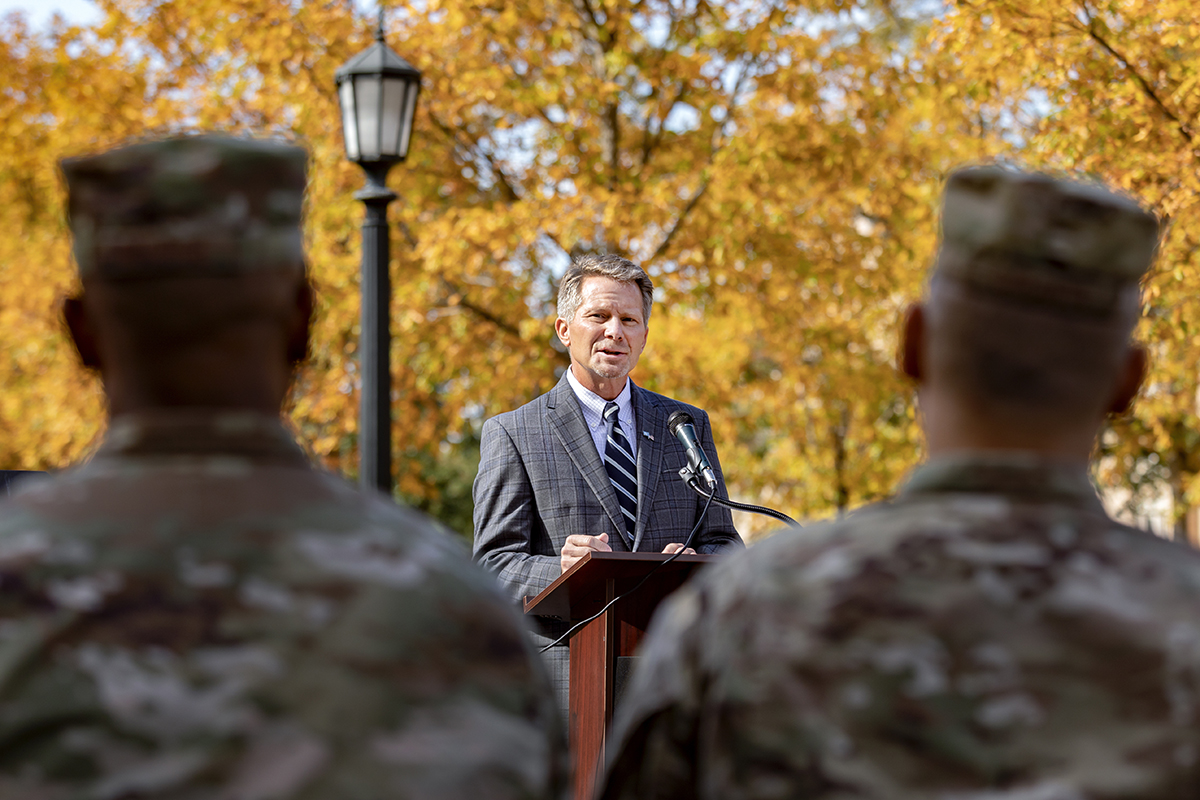 Community members, local veterans, ROTC students, and University and military leaders attended the annual ceremony, which was hosted by the University’s Naval ROTC.

“It’s important that we gather here on Veterans Day, like we have past years, to honor the men and women who have chosen to wear the uniform of our nation — those who have selflessly helped secure the promises of America throughout our history,” said Capt. Andrew Hertel, who leads the Naval ROTC programs at Carolina, Duke and NC State as the commanding officer of the North Carolina Piedmont Consortium NROTC.

In his remarks, Chancellor Kevin M. Guskiewicz reflected on how veterans have not just served the country in uniform but how they still continue to strengthen communities. Tar Heel veterans, he said, play a critical role on our campus by bringing their experiences into our classrooms.

“We all have a richer understanding of the nation we call home when we have a chance to learn alongside the men and women who have served,” he said. 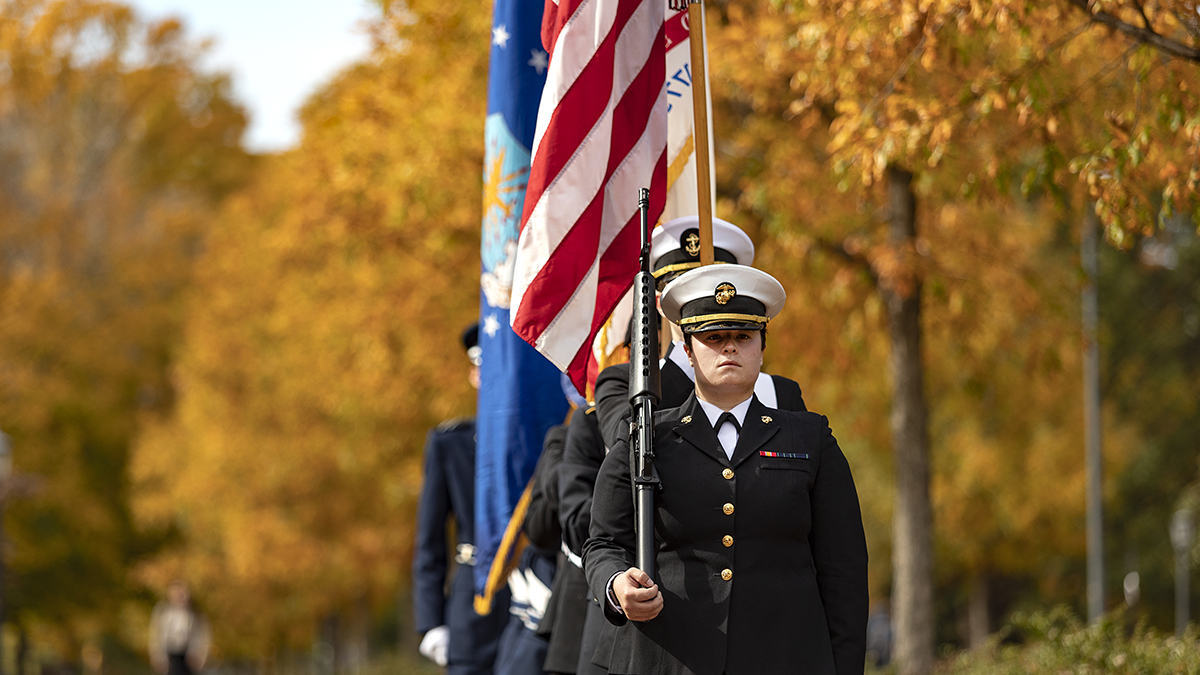 A Veterans Day ceremony was held in front of Memorial Hall on November 11, 2021, on the campus of the University of North Carolina at Chapel Hill. (Johnny Andrews/UNC-Chapel Hill)

Over the past several years, the University has ramped up its efforts to support our veteran community, including the opening of the Carolina Veterans Resource Center in 2017, launching the Boot Print to Heel Print program to help service members transition to college life and hosting Green Zone training to educate faculty and staff on the needs of veterans and military-affiliated students.

Just last week, the University Board of Trustees reaffirmed that dedication to Carolina’s veterans and military-affiliated students in a resolution of support.

“As the nation’s first public university, Carolina is proudly the University of the people,” Guskiewicz said. “We have a responsibility to serve the people of our state and our nation. This is especially true of those who have served us.”

Dennis Blair, a retired Navy admiral and former commander in chief of the U.S. Pacific Command, was the event’s guest speaker. The 34-year Navy veteran served as President Barack Obama’s first director of national intelligence and is currently the University’s first Knott Distinguished Visiting Professor of the Practice in the peace, war, and defense curriculum in the College of Arts & Sciences.

Though Veterans Day is a time to reflect on the scarifies made, Blair said, it is also an opportunity to celebrate all that the veterans have achieved and gained through their service. 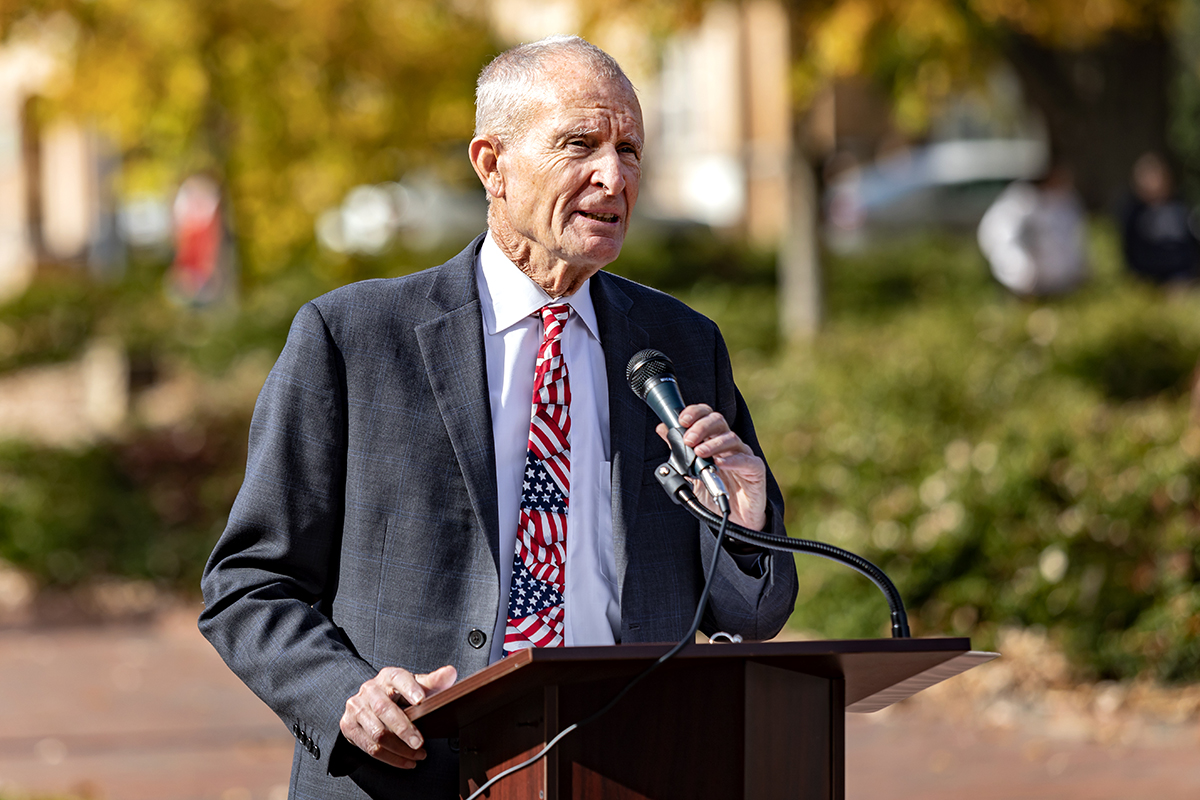 “We remember more strongly the excitement of serving in a cause that’s great than ourselves, that profound sense of satisfaction of being part of a team — an Army, a Marine Corps, an Air Force squadron, a Navy ship — that does dangerous and important things,” he said.

With members of the next generation of military leaders standing in formation at the back of the ceremony, Blair urged attendees to also heed the advice of President Dwight Eisenhower and use the day to refocus efforts on enduring peace.

“Let’s remember the sacrifices of those who fought valiantly,” he said. “Let’s rededicate ourselves to peace so that those of you now wearing the uniform will be sent to fight and called upon to sacrifice only when it’s absolutely necessary.”