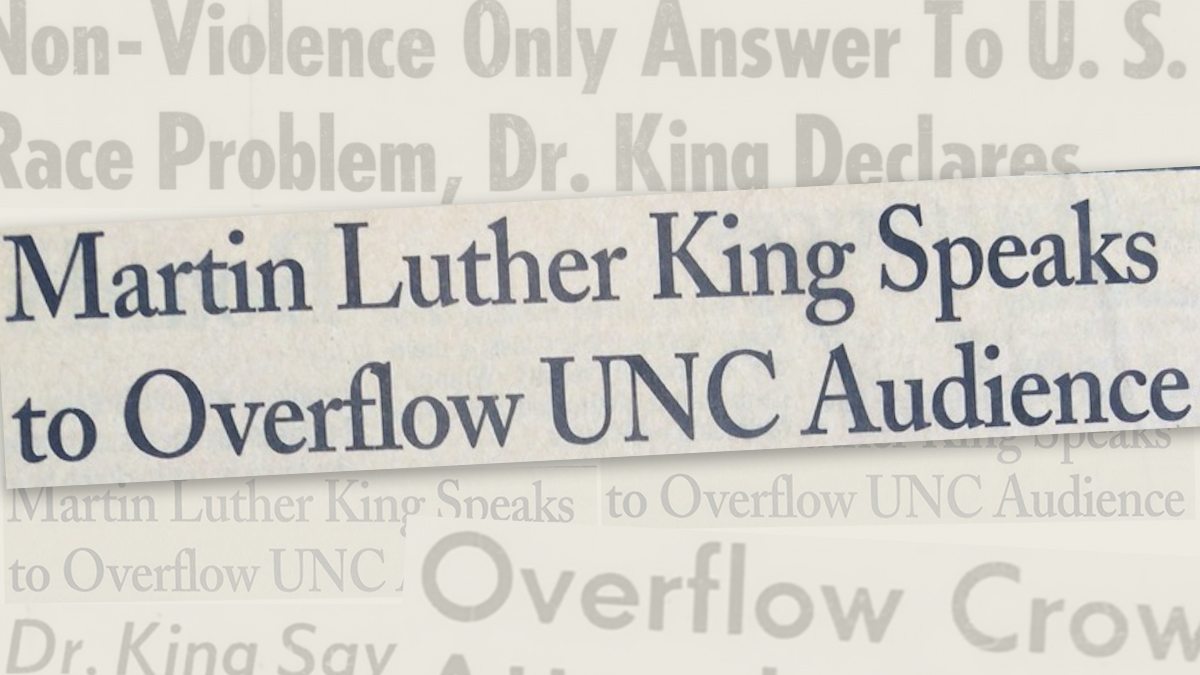 As a Carolina sophomore in 1960, Oscar Brinson didn’t know much about Martin Luther King Jr.

King, then 31, was still working his way to becoming the heralded civil rights leader that we remember on the national holiday in his honor.

But from what Brinson had read about the young reverend, he knew enough to be impressed. So when King came to Chapel Hill to speak on campus, Brinson made sure he was among the group that packed Hill Hall for the speech.

“I felt really privileged to have been there,” said Brinson, a retired lawyer from Richmond, Virginia. “He was so impressive but yet so humble. You just don’t see that. You almost had the feeling that you were in the presence of greatness.”

Invited to the University by campus religious organizations and the Carolina Forum — a branch of student government — King spent May 9, 1960, meeting with community leaders, conducting discussions in University classes and speaking on “The Struggle for Racial Justice” to an overflow crowd at Hill Hall.

His visit occurred just as the fight for equality began gaining momentum in the community. Earlier in the year, there were local sit-ins at segregated businesses. Boycotts and rallies followed and became increasingly more common in the town as community members fought for desegregation.

“Protests would have been picking up then,” said Cecelia Moore, Carolina’s University historian. “There were sit-ins and marches to desegregate businesses and other places in Chapel Hill. These activities started here in 1960, inspired by the A&T student sit-in in Greensboro, but continued through the next four or five years.”

It was the type of peaceful effort King endorsed — a fact he made known when speaking to students in Sociology 51 the day of his Hill Hall speech. The sit-ins, King told the class, were the kind of passive resistance that could force change.

He continued to preach his belief of nonviolent civil disobedience later that evening when, at 8 p.m., King addressed a packed crowd — mostly students. During his speech, King urged the Chapel Hill community to continue its fight for equality while still remaining peaceful.

He also encouraged the audience to “remain passive physically, but active mentality and spiritually” in the struggle for equality and to not only refuse to shoot your opponent but to also refuse to hate him, according to The Daily Tar Heel.

“He had a really good response,” Brinson said. “To me, everything he said made a lot of sense. I found what he had to say in the talk to be really refreshing and something from the heart.”

King spent a lot of time answering the crowd’s questions, which ranged from the effectiveness of boycotts to interpretation of laws affecting the battle toward equality.

But Brinson, intrigued by the speech, had more questions once the talk ended. He waited for King outside Hill Hall for at least 10 minutes, and King ultimately invited the student to walk with him to his car at the Morehead Planetarium.

They spoke for nearly 20 minutes along the way.

“I don’t remember what a single one of my questions were, but he was a man who had a massive dignity and he was very soft spoken,” Brinson said. “He was thoughtful, not just in a curious way, but in the way that he would linger over my questions.

“He must have heard some version of my questions a hundred times before, but he was so gracious. He took it very seriously. He didn’t treat me like what I was — an ignorant sophomore in college who was just being exposed to prejudicial North Carolina.”

Brinson, who went on to earn a degree from the UNC School of Law, said his evening with King one of the highest points of his time at Carolina.

It was an experience that left a lasting impact.

“Overall, my feeling was that he was the most impressive person that I had ever talked to,” he said. “That’s still true today.”