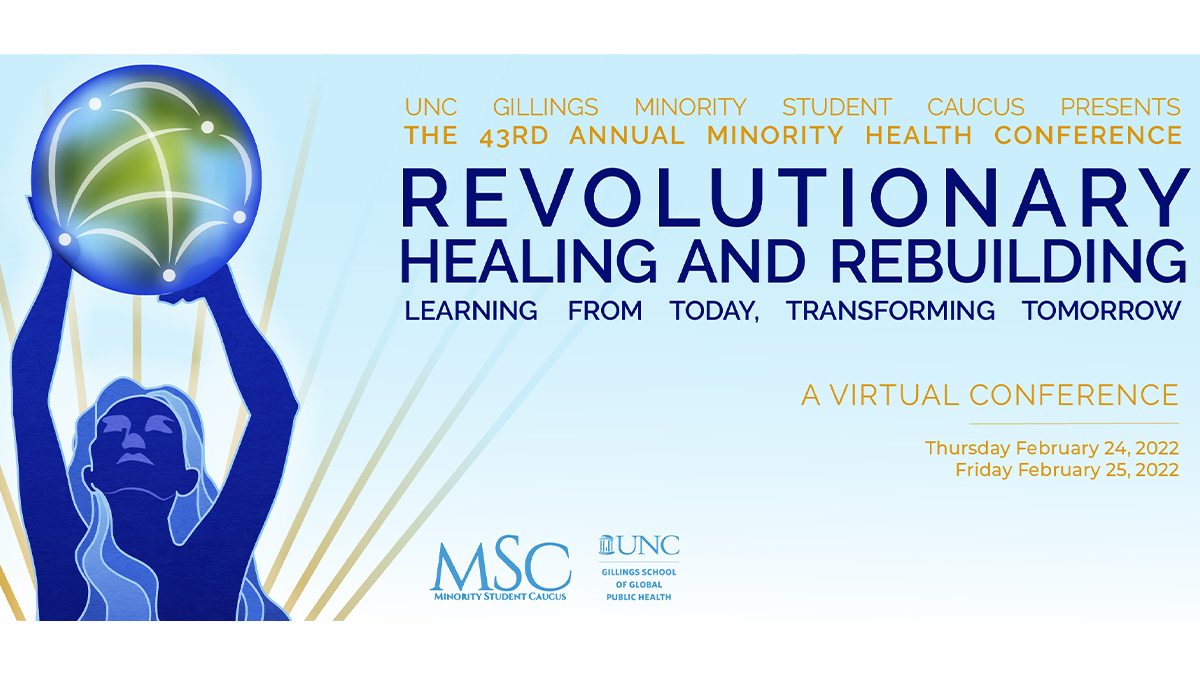 For more than five decades, the Minority Student Caucus at the UNC Gillings School of Global Public Health has been a leading voice for issues facing students of color — both in the school and University-wide — to help all Tar Heels thrive at Carolina.

“We really do our best to advocate for students of color across Gillings and across the University,” said Vanessa Amankwaa, a second-year master of public health student and co-president of the Minority Student Caucus. “We try to create a safe space for students of color to come and talk about any concerns they might have.”

But the student group’s impact and dedication to making a difference in communities goes well beyond the limits of Carolina’s campus.

For the past 43 years, the Minority Student Caucus has hosted the largest and longest-running student-led health conference in the United States, shining a light on research and community work that focuses on social justice and health equity and tackles public health issues that impact marginalized communities.

The group is hosting its Minority Health Conference virtually on Feb. 24 and 25, with the final day to register being Feb. 22. This year’s conference will focus on the theme of “revolutionary healing and rebuilding,” examining how current public health systems can be transformed to create a more equitable future.

“The conference is always an uplifting and inspiring event,” said Sophie To, a doctoral student in health behavior and co-president of the Minority Student Caucus. “We’re really, really excited.”

The event began as a town hall meeting in the school’s Rosenau Auditorium in 1977 and has grown into an annual conference that draws hundreds of scholars and community members from across the country to raise awareness around health disparities and encourage students, researchers and citizens to take action for change.

“I think it’s such a big and unique space for different researchers to talk about research that they’re doing that focuses on communities of color and elevating the efforts that they have made in their own community,” Amankwaa said.

With so many researchers at the UNC Gillings School of Global Public Health examining these topics already, the school makes a logical home for the conference’s mission, Amankwaa said.

“We are the top public school of public health in the country,” she said. “It’s a great opportunity for our students to showcase what they’ve been working on. I think Gillings is the perfect place for it because we have so much going on. We have tons of researchers of color, I feel, and they’re also doing so much great work through the Triangle.”

In addition to highlighting scholarly and community work, the conference, To said, can also provide undergraduates learning the ropes of research exposure to the impacts they can make through their studies. The conference has low registration fees for current students.

“We try to make it as accessible and easy to come to this conference as possible because we know that, as a student-led conference, it can be one of the first points of inspiration for undergrads who are trying to figure it out,” she said.

The Minority Health Conference may be the student group’s flagship event, but it’s just one of the Minority Student Caucus’ many efforts to support and promote work to improve lives of people of color. The group also sponsors professional development opportunities, conducts public service, leads town halls to advise school administrators and hosts community-building events for students.

No matter the event, the core mission remains the same: spark action for change.

“I want people to leave and feel inspired for their own research. But not just research, also to elevate work they’re doing in their community,” Amankwaa said. “We don’t know everything. We don’t have all the expertise. That’s why I feel like a conference is a great space for researchers and community members to connect. … I want them to leave ready to work.”