Kombucha is a drink that has gained popularity in the United States in recent years due to its presumed health benefits, but few can explain whether those benefits are scientifically or clinically true.

Rachel DuMez is a doctoral candidate who participated in The Graduate School’s annualThree Minute Thesiscompetition, and her research seeks to answer this question. The competition offers graduate students the opportunity to sharpen their communication skills when it comes to effectively relaying their research to a non-scientific audience.

Studying a beverage popular among health circles wasn’t where DuMez thought that pursuing a graduate degree would lead her, but through diverse doctoral rotations and a chance meeting with her future principal investigator, she found a lab at Carolina that would allow her to combine her interests.

“Though I had a personal interest in nutrition, metabolism and the gut biome, I had never really considered integrating that into my scientific pursuits,” DuMez said. “Thankfully, UNC-Chapel Hill is an extremely collaborative place. So,it’s been really helpful to be able to leverage the resources we have on campus.”

DuMez and Assistant ProfessorRob Dowenhave worked to create an interdisciplinary research project, including connecting with experts in nutrition from theUNC Gillings School of Global Public Health.She’s also working alongsideAzcarate-Peril, the director of the Microbiome Core Facility, which brings together people who have an interest in microbiome communities and interactions.

Within theDowen Lab, DuMez studies the metabolism ofCaenorhabditis elegans(C. elegans) – small worms only about a millimeter in length – as a model system to learn more about the alleged health benefits of kombucha. Due to the abundant variety of microbes within our human gastrointestinal tracts, finding a clear link between kombucha and its benefits can be difficult to pinpoint.C. elegans, with lifespans of only a month or so and a simple intestine for observation, offer a solution to this challenge.

“In worms, the relevant metabolic processes we are interested in are simpler but highly conserved in humans,”DuMez said. “Therefore, they are a great model system to gain a better understanding of what might happen at a biological level when animals consume kombucha. In the future, we could take a very hypothesis-driven approach to study if the same paradigms we see in worms hold true in higher-level organisms like mice.” 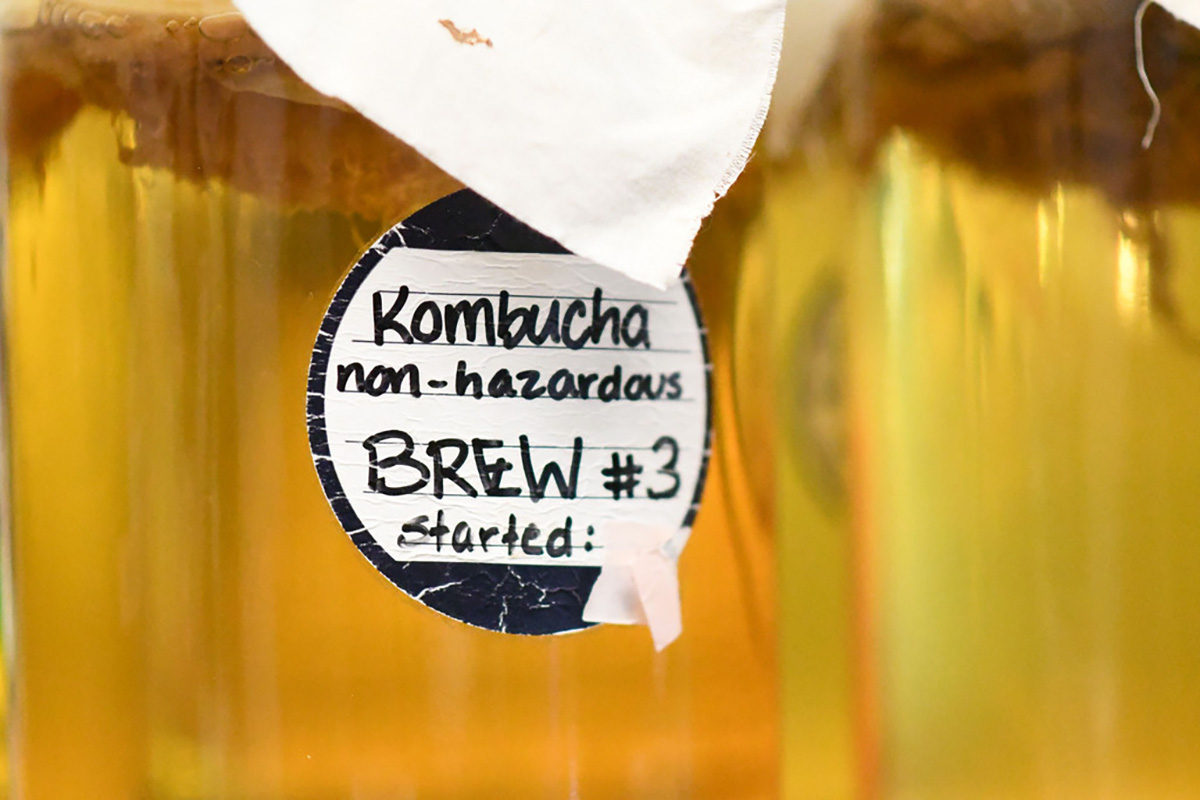 Her research thus far has pointed to an established gut microbiome, extended life and reduced fat storageinC. elegansconsuming a kombucha-exclusive diet. Based on her presentation of this research, she won this year’s peoples’ choice award during the Three Minute Thesis competition.

“It’s a really valuable exercise, regardless of the platform you’re going to share it on,” DuMez said. “But I thought that this year, since the competition would be in person, there’s another added layer of what you need to practice and what you need to prepare for. I was definitely excited to do that.”

The Three Minute Thesis competition helped DuMez relay her research to others, but it also satisfied a personal goal she set out to accomplish in graduate school.

“One of my goals in graduate school was to become a better communicator of my science and to become more confident in talking about my science,” DuMez said. The Graduate School’s professional skills boot camp, which she participated in during the fall of 2021,allowed her to get a jumpstart on achieving that goal.

“The bootcamp was really helpful.As part of that experience, we had to make pre–and post-videos. We had pretty much already put together a three-minute thesis, and so they encouraged us to submit them for the competition since we had pretty much already done that as part of the bootcamp.”That video submission landed her a spot in the top 10 2021 Three Minute Thesis competition.

As for after graduation, DuMez is unsure if her studies will lead her to work in industry oracademia, but herkombucha research, in addition to the communication skills she’s accumulated, will serve as her driving force.