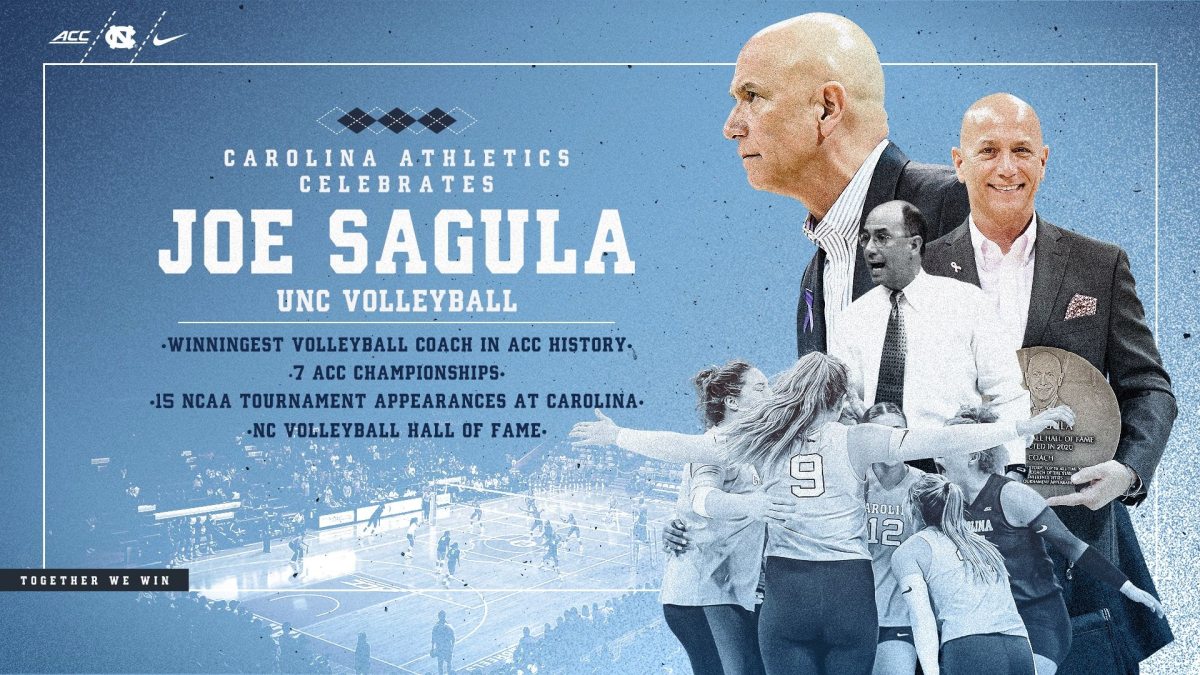 Joe Sagula, who led the University of North Carolina volleyball program to seven regular-season Atlantic Coast Conference championships and is the winningest volleyball coach in ACC history, is retiring after 33 seasons at Carolina and 42 years as a collegiate head coach. He met with his team Monday to share the news.

“As I made this decision to retire, my main focus was to ensure that I leave this program in a strong position to continue to compete for championships, and I feel that timing is right. It has been an honor to coach at Carolina, and I’m very proud of the strong foundation we have built over many years to become a nationally competitive program, and with a terrific squad of players returning and talented recruits coming in, this program is primed to continue to do great things,” Sagula said.

“I’m grateful to the Carolina Athletics administration — from John Swofford to Dick Baddour to Bubba Cunningham — who have contributed to this wonderful period of my life. I also want to thank Chancellor Kevin Guskiewicz and all the exceptional people I have had the honor of working alongside in our athletic department.

“I have had an amazing career filled with so many emotions and the unique joy that coaching in college athletics provides. There are so many players and coaches who have contributed to this program over the years and established great traditions. I appreciate their contributions and impact at Carolina and for trusting me as their coach. I feel fortunate to have the support of so many in our community, including our loyal fans, students and donors. The legacy we have created has helped build something special and lasting in Chapel Hill.”

A national search for the program’s next coach will begin immediately. Sagula will remain the program’s head coach until a successor is named.

Sagula has led the Carolina volleyball program since 1990, coaching the Tar Heels to 10 Atlantic Coast Conference championships (seven regular-season, three tournament) and 15 NCAA Tournament appearances. He led Carolina to a 662-384 record (.633), ranks third nationally among active coaches with 865 career wins and is among the top 20 for all-time wins by a Division I volleyball coach. His seven ACC championships are tied for the most in conference history, and he has the most ACC regular-season wins (364) of any coach all-time.

He has coached five ACC Players of the Year, two ACC Defensive Players of the Year and five ACC Freshmen of the Year. Additionally, his student-athletes have earned 22 American Volleyball Coaches Association (AVCA) All-America honors, 54 AVCA All-Region selections and 82 All-ACC nods and have gone on to successful careers in fields such as law, medicine, business, coaching and teaching.

“Joe’s long commitment to Carolina and the sport of volleyball shows not only in his program’s success on the court, but also in his student-athletes’ success off of it,” said Directory of Athletics Bubba Cunningham. “He has been a dedicated teacher and mentor to his teams and a leader within our Department and University. He leaves our volleyball program in a strong position for the future, and we wish Joe all the best in retirement.”

Inducted into the North Carolina Volleyball Hall of Fame in 2020, Sagula coached Carolina to 14 top-three finishes in the league’s regular-season standings, including first-place finishes in 1998, 2000, 2002, 2005, 2008, 2014 and 2016. In the 14 seasons in which the ACC held a postseason tournament, Sagula led the Tar Heels to seven appearances in the ACC championship match and reached the semifinals 10 times. In 2022, he was named one of the 50 Champions of Carolina Women’s Athletics for his commitment to women’s athletics and his contributions to Carolina’s proud tradition.

“With Joe’s retirement, Carolina Athletics and the sport of volleyball loses an extraordinary coach, lifelong mentor, and dedicated teacher,” said Chancellor Kevin M. Guskiewicz. “His commitment to his players and excellence on and off the court has been an inspiration for our entire campus community. We are grateful for his legacy and the strong foundation he has built for our volleyball program’s future.”

Before his time in Chapel Hill, Sagula, a 1978 graduate of SUNY New Paltz, spent nine seasons (1981-89) as the head coach of the University of Pennsylvania. There, he compiled a 203-123 record with four Ivy League regular-season titles, three tournament championships and was named Ivy League Coach of the Year four years in a row.